Libya has been immersed in violence and instability since the 2011 NATO-led intervention in the country. After a failed attempt at a democratic transition, violence spiked in 2014 and Libya became divided into two opposing governments: the Tripoli-based and UN-recognized Government of National Accord (GNA), which is led by Fayez al-Serraj, and the Tobruk-based House of Representatives, whose leader appointed General Haftar as head of the Libya National Army (LNA).

After years of conflict, and a renewed escalation of violence in April 2019, the situation in Libya recently experienced some significant developments. On October 23, 2020, the 5+5 Joint Military Committee (JMC) signed a permanent ceasefire agreement in Geneva. Subsequently, Acting Special Representative for Libya, Ms. Stephanie Williams, launched the first round of negotiations of the Libyan Political Dialogue Forum (LPDF), where participants agreed to hold national elections in December 2021.

All three negotiating tracks have recently experienced significant developments. At the political level, the LPDF approved on January 19, 2021 a proposal for the selection mechanism of an interim executive authority to run the country ahead of the 2021 national elections. Subsequently, members of the forum undertook a voting process between February 1 and 5 to elect the members of the aforementioned executive authority. The winning list was the one formed by Mohammad Younes Menfi, who serves as President of the Presidency Council, Mossa Al-Koni and Abdullah Hussein Al-Lafi, who serve as members of the Council, and Abdul Hamid Mohammed Dbeibah, who holds the post of Prime Minister.

At the security level, in turn, Ms. Williams noted in her last briefing to the UN Security Council that the deadline established in the ceasefire agreement for the departure of all foreign fighters from Libya has not been met and expressed concern regarding various activities that “undermine the 5+5 process”. Most recently, the JMC held a new round of negotiations between February 4 and 7, in which representatives focused on the opening of Libya’s coastal road, which strategically links eastern and western Libya.

Finally, as far as the economic track is concerned, negotiations have also experienced some important advances. Particularly significant have been the unification of the exchange rate in December 2020 and the approval of a 2-month national budget in February 2021, which will enable the newly selected executive authority to design and present its full national budget for 2021.

Throughout Libya’s conflict, opposing forces and armed groups have perpetrated grave human rights violations and serious breaches of international law. The renewed period of violence that lasted between April 2019 and June 2020 resulted in hundreds of civilian deaths and caused the displacement of thousands of people. Despite the halting of fighting in mid-2020, Libyans continue to face enormous challenges as they deal with the consequences of conflict, the impact of the country’s political and economic crises and the effects of the Covid-19 pandemic.

Migrants and refugees face serious perils and grave human rights violations. Many have been killed, injured, kidnapped and placed in detention centres, where they are subject to sexual violence, forced labour, ill-treatment, overcrowding and severe malnutrition. The situation of migrants that attempt to cross the Mediterranean Sea is particularly worrying. Many of them are intercepted at sea and returned to Libya, and many others die in their attempt to reach Europe. In 2020 alone, hundreds of migrants died off the Libyan coast and more than 11,000 were intercepted and returned to Libya, where they are generally arbitrarily detained and placed in the aforementioned detention centres.

Libyans also continue to face significant challenges stemming from the effects of conflict, including the widespread presence of explosive devices, which constitute a significant risk to the life of many. Moreover, other consequences of the prolonged conflict and the human rights violations perpetrated in the country are also being felt in cities like Tarhouna, where numerous mass graves have been discovered since June 2020.

Freedom of expression has also been significantly curtailed in Libya. In August 2020, groups related to the GNA used excessive force against demonstrators protesting poor conditions of life, and in September, demonstrations in eastern Libya were also met with excessive force, reportedly leaving one civilian dead and at least three injured. Another notorious case was that of lawyer and activist Hanan al-Barassi, who had spoken up against corruption, abuse of power and human rights violations, and was killed in November 2020.

GICJ welcomes the recent political, economic and security-related developments in Libya and believes they are a cause for optimism for 2021. We remain deeply concerned, however, about the humanitarian and human rights situation in the country. We strongly reject the continued violations of human rights in the country and call for such abuses to end. Justice and accountability must be a central part of Libya’s transition towards peace, and cooperation with both the ICC and the fact-finding mission established in 2020 to investigate violations committed since 2016 is key in order to advance justice and attain lasting peace in the country. Moreover, we reiterate our call on the international community to enforce the arms embargo imposed on Libya since 2011, as doing so is crucial in order to ensure the maintenance of peace in the country. 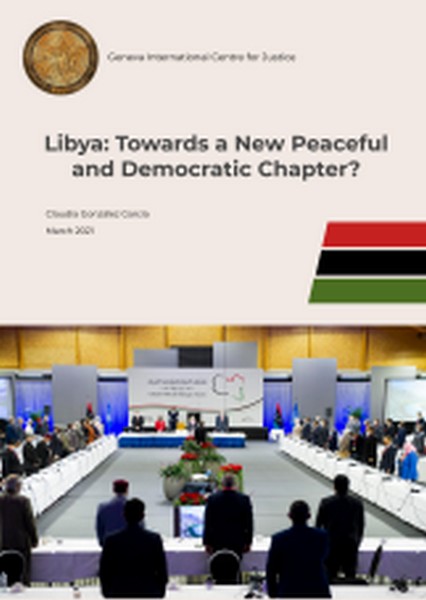