By: Nora Futtner and Natalia Brusco

Geneva International Centre for Justice (GICJ) presents the report, “Hate Speech is On the Rise” to explain the rise in hate speech across Western countries which have led to the subsequent rise in discrimination and hate crimes against minorities. The freedom of expression and opinion are rights all human beings deserve; however, too often, freedom of opinion is taken advantage of, resulting in hate speech and causing already vulnerable communities to become further stereotyped and discriminated against.

GICJ describes how with the emergence of new technology and increased access to the internet around the world, discussions about how to deal with online hate speech and content is urgent and necessary. Racist comments by politicians embolden people with discriminatory views to express themselves and State’s need to instill more measures to ensure a hate speech is monitored and that there is a zero tolerance of hate crimes. GICJ believes all individuals, regardless of race or ethnicity deserve to be treated with dignity and respect and provides several recommendations to hinder the proliferation of hate speech so that it does not create norms that can lead to discrimination and violence.

Hate speech is dangerous because of its potential to legitimize intolerance, which can put into action very serious and violent outcomes. When hate speech is allowed to proliferate, it contributes to the creation of norms: hatred and intolerance become acceptable in society. When a leader, especially a trusted leader, engages with hate speech, the process of norm creation is enhanced. In such a social climate, actions that may have previously seemed extreme become imaginable or even plausible. In extreme cases, hate speech can trigger the most grievous crime of genocide, as we saw happen in Germany, Myanmar, Bosnia, Cambodia and elsewhere.

The prohibition of discrimination is an established tenant of international law. The United Nations International Convention on the Elimination of All Forms of Racial Discrimination (ICERD), which entered into force on the 4th of January 1969, bans “any distinction, exclusion, restriction or preference based on race, colour, descent, or national or ethnic origin,” which aims to restrict fundamental human rights. The 1981 Declaration on the Elimination of All Forms of Intolerance and of Discrimination Based on Religion or Belief states in Article 2 that “no one shall be subject to discrimination by any State, institution, group of persons or person on the grounds of religion of belief.”

Signatories of these accords, which includes all of the western democratic countries that will be mentioned within this report, are obliged to take steps on a national level to align with the requirements of the conventions. For the purpose of this report, we will focus on the concept of hateful and discriminatory speech, which has been underrecognized as a form of discrimination and has the potential to precipitate serious societal consequences.

In this instance, the term ‘western democracies’ is used in reference to countries in Europe, as well as the United States, Canada, Australia and New Zealand, which have traditionally been understood to have high levels of wealth, civil rights and liberties, tolerance and even welcoming of diversity and political freedoms. ‘Liberal democracy’ is often also used to describe the same idea. In conventional discourse, western democracies are considered to have the highest standards of human rights and are thus essentialized as a metric to which all others should strive.

Alarmingly, many countries have witnessed a rise in hate speech and discrimination in recent years. Politicians from western democracies have been flagrantly ignoring the guidelines outlined in the ICERD over 50 years ago and engage in hate speech on public platforms. Instead of using freedom of speech to engender unity in society, leaders from right-wing nationalist groups have co-opted the concept to levy discriminatory speech against fellow citizens. Far-right nationalist parties such as the Danish People’s Party, Swiss People’s Party, Fidesz (Hungary), Freedom Party (Austria) and United Patriots (Bulgaria) have become increasingly xenophobic and racist in rhetoric and action while simultaneously growing increasingly popular. Most notably, far-right parties have targeted refugees, migrants and Muslims in particular, aiming to create a narrative that minorities do not belong in the country.

In the digital world the potential for hate speech to incite violence is heightened due to the rapidity with which it can spread and the lack of accountability due to the means to post anonymously. Posting hate speech on social media enables the transmutation of violent thoughts into violent actions, especially when those thoughts come from trusted leaders. With one push of a button, politicians can reach anyone in the world. This new complication in managing hate speech will be an important focal point in the examples included in this report.

In the United States of America, on 6 January 2021, people around the world witnessed an extreme consequence of allowing hate speech to flourish and spread on social media. Pro-Trump insurrectionists, who had coordinated for weeks on Facebook and other social media platforms such as the unregulated ‘Parler,’ stormed the United States Capitol, resulting in deaths and injuries. Meanwhile in France, on 16 October 2020, a middle-school teacher, Samuel Paty, was beheaded in an act of terror that shocked the nation. Mr. Paty had showed his students Charlie Hebdo’s 2012 cartoons depicting the Islamic Prophet Muhammad during a class on “Free Speech”. This triggered a social media campaign and complaints that he should be fired as a teacher for showing disrespectful content against Muslims, ultimately leading to his assassination days later.

In Germany in 2019, a pro-refugee politician, Walter Lübcke, was killed by a far-right extremist by the name of Stephan Ernst. After Lübcke was killed, neo-Nazis circulated support of his murder online, solidifying the frightening reality of the situation: people are willing to commit and support hate crimes that are against their political viewpoint of denying refugees and celebrate attacks as “victories” online. This shows how online hate speech can lead to drastic repercussions, making it harder to argue against censorship laws knowing they could potentially help save lives and prevent crimes. At the same time, in Hungary, Prime Minister Viktor Orban and his party Fidesz regularly and freely engage in hate speech, taking advantage of the misinformation of the public to build a political order based on the scapegoating of minorities.

Further, since the United Kingdom withdrew from the European Union, there has been an increase in hate speech and thus discrimination. Police in the UK have found a recurring pattern where when verbal abuse escalates, physical abuse starts and in 2019 the team established that as hate speech increases on Twitter, it directly corresponds to crimes against minorities in cities.

Denmark’s far-right party, known as Stram Kurs (Hard Line), is infamous for its anti-Islam platform. In Italy, Politicians on the far right have said statements on countless occasions demonizing refugees and mocking people of color. In New Zealand, there are currently four extreme right parties of concern, all of which are actively posting messages containing hate speech on social media. This is not okay and needs to end.

Geneva International Centre for Justice (GICJ) believes the freedom of opinion and expression is a fundamental human right and needs to be protected. Free speech is widely recognized as an important baseline for all open and healthy societies and should not be infringed upon. In countries that protect freedom of speech, social movements that increase the ability of all citizens to access their social, economic, cultural and political rights have been able to spread their message and create change. We have seen this occur in recent examples such as the Black Lives Matter protests in the United States and the Māori Protest Movement in New Zealand.

However, there are some who believe that the ideal of free speech can be used as a justification for hate speech. Free speech does not include the right to make statements at whatever time, in whatever place and in whatever fashion. Free speech also does not include the right to have one’s sentiments artificially amplified on social media platforms. This statement has provided an overview of some of the recent consequences that have resulted from the unhindered spread of hate speech. By working in cooperation and solidarity across religions and States, the implementation of these action plans is vital to the success of countering hate speech.

GICJ would like to recognize initiatives relating to preventing hate speech that leads to incitement of violence. In line with the Strategy and Plan of Action on Hate Speech, the Office on Genocide Prevention and the Responsibility to Protect (“the office”) has already launched two projects. The first focuses on the prevention of incitement to violence that could lead to atrocity crimes. To this end, the office released guidelines on how states can tackle hate speech. They include advice such as reframing the education system to reflect the ethnic and cultural diversity of the State, with the aim of increasing solidarity and helping to counter hatred. Similarly, enforcing laws and providing justice and accountability surrounding acts of incitement to violence can help with prevention. The document includes policy options not only for States, but also for civil society, the media, the United Nations, and regional, sub-regional and other intergovernmental organizations.

The international community needs to harden the lines between free speech and hate speech to avoid miscommunication between politicians and citizens. States cannot let racism and discrimination win, and politicians need to be called out when they incite violence from hateful speech. Hate speech cannot become normalized because it is too often used as a tool to spread hateful messages about minorities, resulting in hate crimes. 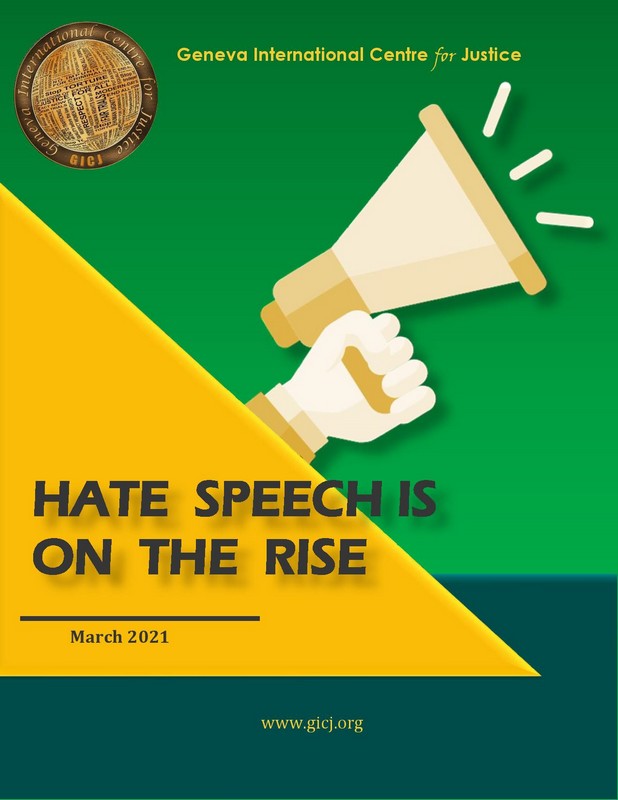