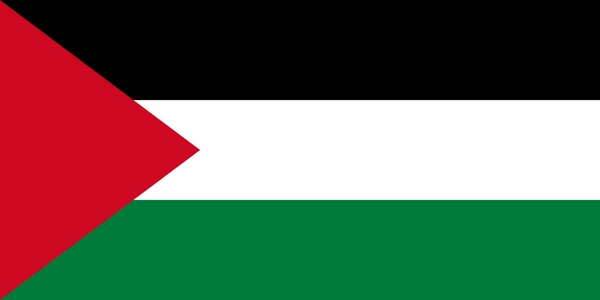 The Committee on the Elimination of Racial Discrimination (CERD or Committee) conducted its first review of Palestine during its 99th Session in Geneva, Switzerland, which ended 29 August 2019.

The Palestine delegation reiterated its full commitment to UN mechanisms and bodies and outlined the consultation process with civil society organisations and ethnic groups that led to its report. It reminded the Committee that discrimination has resulted from the prolonged occupation by Israel and then proceeded to discuss the Palestine's implementation of the International Convention on the Elimination of All Forms of Racial Discrimination.

The Committee posed a wide-ranging series of issues and questions to the delegation ranging from the need for updated and disaggregated data on cases of discrimination; instances of honour killings, child marriage and discrimination against women; and measures taken to improve the living conditions of migrants, refugees and internally displaced persons (IDPs), to the ability of minority groups to represent themselves in the media; how children are educated about their culture and identity without turning to racism and discrimination; and the harmonisation of laws between the Gaza Strip and the West Bank. The delegation then responded to with additional information on a number of points. On 29 August 2019, CERD released its concluding observations with a number of recommendations for Palestine to improve the situation of racial discrimination.

In this article, GICJ will explain how the Committee works and describe how the review of Palestine went, the questions of the experts, answers of the delegation, concluding observations of the Committee and, finally, GICJ’s own point of view on the session.

The Committee is a body of independent experts monitoring the implementation of the Convention by its State parties. States parties must report to the Committee in the first year of their ratification and then, every two years. The reports of the State party, national human rights institutions (NHRI) and of non-governmental organisations (NGOs) are submitted to the Committee and reviewed by it. The review often consists in two three-hour-long meetings and the publication of recommendations at the end of the session.

During the first meeting, the delegation of the State presents its report and gives an update, followed by the presentation of a report by the NHRI. Then one of the Committee members, which has been designated as “country rapporteur”, presents a report about the implementation of the Convention by the State party and poses a series of questions. Following this presentation, other members of the Committee pose questions to the delegation.

The State is asked to provide a follow-up report within one year.

Overview of the Review of Palestine 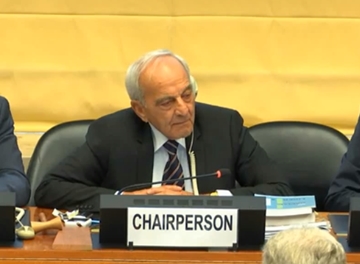 On the occasion of this first review, the delegation, chairperson and experts recalled the particular case of Palestine, which is under occupation, and underlined the difficult challenges they are facing and will face as long as the Palestinian people cannot exercise the right to self-determination.

Even though reports to UN Committees must be focused on the country reviewed, they explained that the case of Palestine cannot be understood without talking about Israeli laws and violations in the Occupied Palestinian Territories, which undermines the actions of the State of Palestine. It further recognised that the de-facto Hamas government in the Gaza strip make the actions of the State more difficult to carry out. The Committee nonetheless recalled that the government of Palestine should take all measures to ensure the respect of the Convention and other international and national legal instruments within its whole territory. 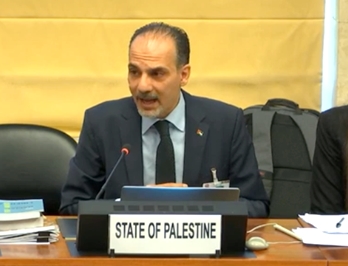 The delegation reiterated its full commitment to UN mechanisms and bodies and outlined the consultation process with civil society organisations and ethnic groups that led to its report.

It reminded the Committee that discrimination can come from prolonged occupation and the infringements upon Palestinians’ right to self-determination through the existing colonial system, forced displacement, killings, the permit system and confiscation of lands – it called out institutionalised discrimination.

Aside from numerous discriminatory actions from Israel, the delegation discussed the issues existing within Palestine in the implementation of ICERD by the State.

It further declared that several laws have been passed or are under consideration, including on the access to higher education without discrimination and the amendment of article 99 of the criminal code, which previously allowed reduced sentences in case of honour killings.

The country rapporteur and experts

The chairperson and experts welcomed the report and explanations of the delegations, commending Palestine’s ratification of the Convention without reservation and the steps taken towards the elimination of racism. 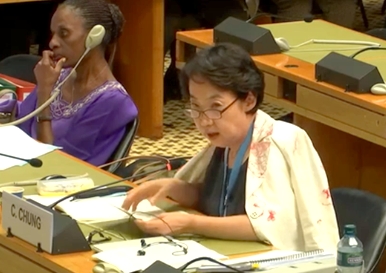 The country rapporteur, Chinsung Chung, asked the government of Palestine to submit a common core document, and why such a low number of NGOs in Palestine are working on the issue of discrimination. She asked for updated and disaggregated data on race, ethnicity and national origin; on migrants, refugees and asylum seekers; and on cases of racial discrimination, hate crime and hate speech that have been brought before a court. She regretted the lack of a comprehensive definition of racial discrimination. She asked, referring to the Supreme Constitutional Court’s decisions, if the Convention will be fully implemented. She asked for information regarding the harmonisation of laws between the Gaza Strip and the West Bank; on honour killings, child marriage and discrimination against women; and on religious groups. She asked about the measures taken to improve the living conditions of migrants, refugees and internally displaced persons (IDPs) as well as those taken to reduce the risk of statelessness, and if the government will establish data on foreign workers. Finally, she asked about the measures taken to fight human trafficking and for the rehabilitation of victims.

Other member of the Committee asked for information on Roma people; about the right of minority groups to represent themselves in the media; for data on complaints filed for racial hatred and the awareness raising and training needed for people to know their rights in this regard; if a Jewish minority was living in Palestine, and how it was integrated into society; and if an internal roadmap of SDGs is in place. They asked several questions related to children, including the request for data on school attendance and challenges faced by children to go to school; how children are educated about their culture and identity without turning to racism and discrimination; if children from minorities have access to school in their own language. They then asked questions regarding the laws, including the impact of the laws on the population; the differences in legislation between the Gaza Strip and the West Bank; the process of publishing and implementing laws; the laws on domestic workers, the regulation of their hours and the penalties for violent employers.

Answers from the delegation

The delegation responded to the questions by recalling that many services in Palestine are provided by Israel and that the ongoing occupation creates an atmosphere conducive to violence and discrimination. It deplored that groups of individuals are trying to force a false definition of antisemitism; outlining that being a Palestinian fighting for the rights of Palestine against Israel should not fall under the term of “antisemitism”. 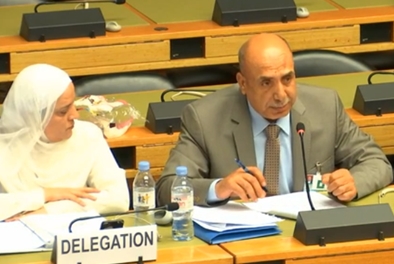 The delegation said the common core document is almost finalised; that respect for every ethnic community and culture was promoted in the classroom; that a Committee has been set up to follow the implementation of the Convention; and that the State contributes financially to the Independent Commission for Human Rights[1]. This Commission has been receiving complaints from Palestinians regarding human rights violations but, of the 2500 complaints on human rights violations received each year, none concerns racial discrimination. Since the State accepted article 14 of the ICERD, this Commission will now be in charge of receiving the individual complaints filed under this article.

The delegation outlined the issue of labelling people as “minorities”, this word giving the impression of third-class citizen, and acknowledged the importance of raising awareness regarding the specific rights this status would give.

The delegation then gave data regarding access to education, health and justice of people from different ethnic and religious groups, as well as information on the laws existing to combat racial discrimination, human trafficking, child marriage, abuses of domestic and foreign workers, and statelessness. Regarding the last issue, the delegation said it will consider ratifying the two UN convention on statelessness.

On Thursday, 29 August 2019, CERD released its concluding observations on the combined initial and second periodic reports of the State of Palestine.[2]

In these observations, the Committee, while acknowledging the difficult conditions of work for the State of Palestine due to the occupation and settlements, reminded the delegation that the State should nonetheless take “all possible measure to implement (the Convention) in all parts of the territory.” It regretted that the limited progress made in resolving internal political issues is having negative effects on Palestinians’ enjoyment of their rights. The Committee noted several positive aspects, such as Palestine’s accession to many international human rights instruments and legislative measures on public education, culture and rule of law.

It raised concerns regarding 11 main issues:

Other recommendations included the ratification of other treaties; to add in its next report information on measures taken to implement the Durban Declaration and Programme of Action; to prepare and implement a suitable programme of measures and policies in collaboration with organizations and peoples of African descent.in the framework of the International Decade for People of African Descent; consultations with the civil society; and the prepare a common core document that the State is encouraged to submit and update regularly.

The Committee finally requested a follow up within one year on statistics, the inclusion of the Convention in the domestic legal order, the harmonization of legislation and compliance with the Convention, and on nationality.

We recall that racial discrimination contributes to economic and social inequalities. The violations of rights of some minorities has disastrous impacts on their lives as well as on the development of the society in its whole. The Universal Declaration of Human Rights stated, in its article 1, that “All human beings are born free and equal in dignity and rights.” This equality cannot be achieved when States perpetrate, or allow within their territory, acts of racial discrimination.

We further recall that the State is responsible for the implementation of the international instrument it is party to. In this aim, as far as possible in the context of the Israeli occupation, the State of Palestine must take all necessary measures to reduce discrimination.

We welcome the presentation of the report by the delegation but regret that the delegation did not answer all the Committee’s questions and are looking forward to its interim report in one year.

[2] Committee on the Elimination of Racial Discrimination, Concluding Observations on the Combined Initial and Second Periodic Reports of the State of Palestine, UN Doc. No. CERD/C/PSE/CO/1-2 (Advance unedited version 29 August 2019), https://tbinternet.ohchr.org/Treaties/CERD/Shared%20Documents/PSE/CERD_C_PSE_CO_1-2_36938_E.pdf.