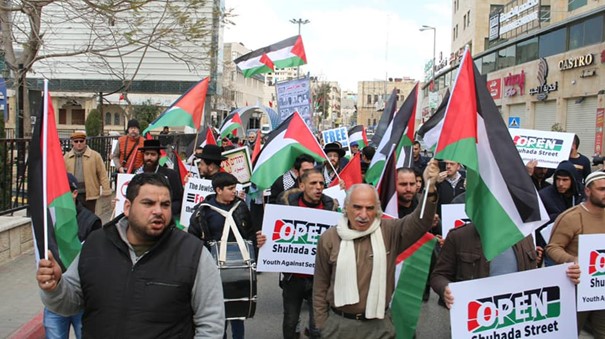 Detained without trial and charges over lengthy periods of time, never knowing the reason and when the extension will end? For those familiar with international human rights standards this may sound absurd, yet for 350 Palestinian prisoners in Israeli jail (as of September 2020), it is a harsh reality. Among them is Mohammed Al-Zoghayer. Since 20 April 2020, he has been held in administrative detention by Israel without trial and charges. The arrest is the last of several arrests by the Israeli military. Since 2005, he has served approximately 46 months in Israeli prison. Following his latest arrest, Mohammed Al-Zoghayer finally had enough. After 6 months of administrative detention, he declared a hunger strike.

For Palestinian prisoners in Israeli jails, a hunger strike is a not a good idea. Though under international human rights norms, hunger strike is a civil and political right, Israeli prison authorities regularly punish the detainee for alleged "violation of disciplinary rules”. The prisoner will be placed in solitary confinement and subjected to cruel and inhumane treatment. This also happened to Mohammed Al-Zoghayer. Since the beginning of his hunger strike on 21 October 2020, he was placed in isolation. His mattress, clothes, and other personal belongings were taken away. Soldiers make noise to keep him sleep deprived. According to Amnesty International, such measures violate the right to freedom of expression,[1] yet when has Israel cared about international human rights norms when it comes to Palestinians? 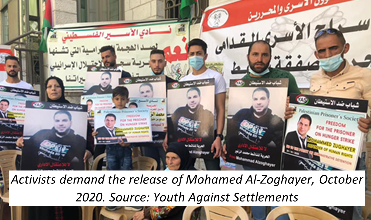 An appeal to release Mohammed Al-Zoghayer was brought to the Israeli Supreme Court on 29 October 2020. Unsurprisingly, the Supreme Court did not show mercy. Mohammed Al-Zoghayer, who has developed diabetes in prison, continues to be held in administrative detention, in poor conditions, and at heightened risk of contracting COVID-19. The reasons for his arrest are still unknown.

Under international law, administrative detention is considered among the most extreme measures and may be used only for “imperative reasons of security”[4]. Nevertheless, over the years Israel has used administrative detentions to hold thousands of Palestinians for lengthy periods of time[5] and frequently exploits this measure to detain Palestinians for their political opinions and for engaging in non-violent political activity.”[6] Also Mohammed Al-Zoghayer’s detention appears to be related to his human rights activities.

Mohammad Al-Zoghayer (born 1987) is a Palestinian Human Rights Defender from Hebron, Palestine. In 2010, he joined Youth Against Settlements (YAS), which is a nonviolent activist group based in Hebron, that strengthens the local community’s steadfastness against the illegal expansion of Israeli settlements. Mohammed Al-Zoghayer serves as their Arabic spokesperson. Over the years, the group has continuously faced reprisals including death threats, attacks, raids, and arbitrary arrests. On several occasions, UN Special Rapporteurs have called for their protection.

YAS was co-founded in 2008 by EU-recognized Human Rights Defender Issa Amro, who is facing multiple charges in an Israeli military court for his human rights activities. He is currently waiting for the sentence to be handed down. The case has drawn international attention and was the subject of several UN communications. During the trial against Issa Amro, the judge defended illegal settlements and occupation. GICJ has issued several urgent appeals on his behalf. 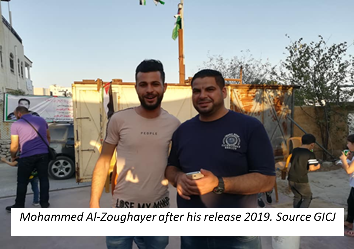 Mohammed Al-Zoghayer is married with three children, aged 6, 3, and 1. In addition to his nonviolent activism with YAS, he is the coordinator of the Sons of Hebron committee, which encourages Hebronites to visit and practice their faith in the Ibrahimi Mosque, despite pressure by the Israeli military. Previously, he was the spokesman for a labour union in Hebron that opposed the Palestinian Authority’s unjust social security laws. His detention is clearly related to his human rights activities.

In 2005, he was arrested and detainee for 15 months and again in 2008, for 20 months. On 28 October 2015, he was arrested for 30 days for alleged stone throwing.  He was later released on bail after being found not guilty by an Israeli military court. In 2019, he was held in administrative detention without charges for 4 months. On the day of his release, he met his 6-week-old son for the first time in his life.

The detention of Mohammed Al-Zoghayer is in clear violation of article 9 and 19 of the ICCPR, which provides that everyone has the right to liberty and security of person. Accordingly, a person must not be subjected to arbitrary arrest or detention and everyone has the right to freedom of expression. Mohammed Al-Zoghayer's treatment further violates the Convention against Torture, as well as the UN Standard Minimum Rules for the Treatment of Prisoners, particularly rule 19 – 21 (clothing and bedding) and rule 39 (restrictions, discipline and sanctions), calling for disciplinary measure to be in line with the principles of fairness and due process.[7] 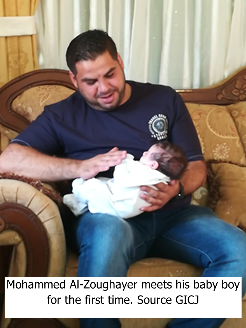 The repeated arbitrary arrests without charge or trial as well as the treatment of Mohammed Al-Zoghayer by Israeli authorities following his hunger strike are clearly aimed at deterring him from exercising his legitimate right to freedom of expression. His case is symbolic of Israel's systematic reprisals against human rights activists in general and YAS in particular.

Article 12 of the Declaration on the Right and Responsibility of Individuals, Groups and Organs of Society to Promote and Protect Universally Recognized Human Rights and Fundamental Freedoms holds that states must take all necessary measures to ensure the protection of everyone against any violence, threats, retaliation, de facto or de jure adverse discrimination, pressure or any other arbitrary action as a consequence of his or her legitimate exercise of the rights.

In view of Israel's ongoing reprisals against nonviolent human rights activists, abusive use of arbitrary detention as well as the degrading punishment of detainees for hunger strikes, GICJ has appealed to UN Special Rapporteurs for their intervention. GICJ has urged the Special Rapporteurs to call on Israel to end the spiral of reprisals against Human Rights Defenders in general and YAS in particular. We have further petitioned the Special Rapporteurs to urgently remind the Israeli authorities of their obligation under international law to guarantee freedom of expression, to abolish its abusive practice of administrative detention and release detainees, to immediately end its abusive treatment of Palestinian prisoners on hunger strike. The Special Rapporteurs must also demand that the Israeli authorities immediately disclose the reasons for Mohammad Al-Zoghayer’s arrest and grant him a fair trial in the event that charges are eventually brought forward.

[4] Article 78 of the Fourth Geneva Convention