The 5th  June 2020 marks the commemoration of the 53rd anniversary of Naksa. In light of Israel’s recent threats to illegally annex the occupied West Bank, the commemoration must draw the attention of states to the need for urgent action to do all that is necessary to prevent the illegal annexation. States must speak with a strong and clear voice in condemning these deplorable threats and preventing Israel from following through with its planned illegal annexation. The annexation is scheduled to take effect next month. 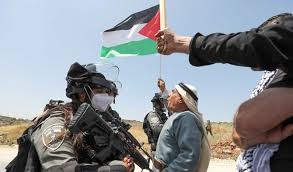 Geneva International Centre for Justice (GICJ) adds its voice to the strong condemnation of Israel’s threats and calls on the United Nations to ensure that the illegal annexation does not take place.

At the end of the 1967 Six-Day War, Israel delivered “Naksa” to the Palestinians. The Arabic word “Naksa” meant defeat and led to tens of thousands of Palestinians being forcibly displaced from the occupied Palestinian Territory (OPT) as Israel took control of the West Bank, Gaza Strip, Egypt’s Sinai Peninsula and Syria’s Golan Heights. Prior to this,  as Israel was establish in 1948, an extremely violent war followed and propelled the ethnic cleansing of Palestinians through their systematic expulsion from their homelands.

Israel’s illegal annexation has been systematically strategized and implemented gradually for decades as evident from the prevalence of illegal Israeli settlements in the OPT which has consistently grown over the years. In parallel, Israel has systematically disempowered Palestinians in the OPT. Palestinians are denied construction permits and prevented from constructing schools, hospitals and homes.

Palestinians’ movements are regulated and impeded through road blocks and checkpoints, which are set up on a daily basis. Israeli policies have rendered it near impossible for Palestinians to seek vital medical care which has had dire consequences, especially during the current pandemic.

These Israeli policies are blatantly discriminatory as they only apply to Palestinians and not to Israeli settlers or their settlements. Settlers are able to benefit from government aid, including the financing of housing, education, and infrastructure. Settlers are placed under Israeli civil law whereas Palestinians are judged according to Israeli military law. Israel has implemented a modern day apartheid system, in gross violation of international law.

Under the Fourth Geneva Convention, the transfer of civilians of the occupying power into the occupied territory is prohibited and yet, in the OPT, Israel is doing so deliberately and systematically. This is a flagrant breach of international humanitarian law and continues despite numerous UN resolutions demanding Israel’s withdrawal from the OPT.

Israel continues its illegal occupation of the Palestinian territory and currently occupies 85% of Palestine with the remaining 15% left for Palestinians, although majority of these lands remain subject to some form of Israeli control.

GICJ calls the international community to hold Israel accountable for its war crimes which have been many and recurring in OPT for decades. The impunity which Israel has enjoyed has led to the current state of affairs, where they are now able to issue threats of illegal annexation without fear of consequence. If ever there is to be a transition to justice, it must be now as justice for the Palestinians is long overdue.