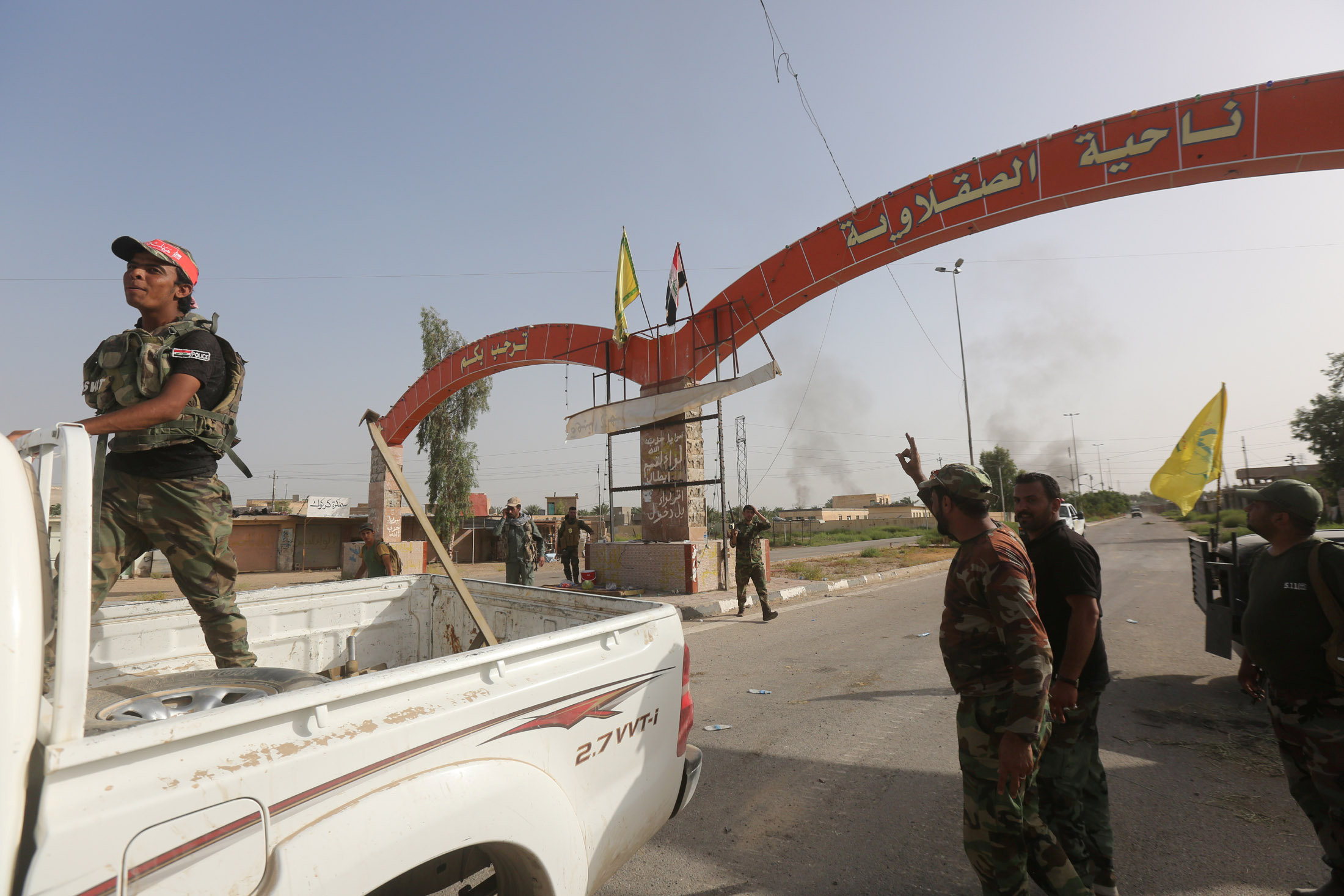 Geneva International Centre for Justice (GICJ) sent an urgent appeal to Mr Zeid Ra’ad Al Hussein, United Nations High Commissioner for Human Rights and to the Working Group on Enforced or Involuntary Disappearances on 11 and 12 October 2016, with regards to the 643 individuals disappeared from Saqlawiya (Al Anbar province, Iraq), on 2-5 June 2016. This occurred in the aftermath of the “liberation campaign” launched against the city of Fallujah in May 2016 allegedly aiming at retaking the city from ISIS.

Our Centre has mentioned this case to the High Commissioner and the Working Group in several instances before, particularly through letters sent on the 8 June, 29 June, 5 August and 9 August 2016. We have also released a detailed report, titled Fallujah: Inside the Genocide, at the time of the military operation to document the grave human rights violations occurred at the hands of the Iraqi security forces-affiliated militias against civilians, which has been sent to both the High Commissioner and the Working Group on 20 June 2016 along with a list of those identified at the time as disappeared.

Now that GICJ has available a fully updated list with the names of each of the 643 individuals who has forcibly disappeared in those unfortunate circumstances, it considered a matter of primary urgency to forward such list to the OHCHR in the hope that immediate action can be taken to investigate into the disappearances.

The military operation launched against Fallujah on 22 May 2016 by the Iraqi security forces, backed by hundreds of militias - trained and armed by Iran- and well supported by a US-led air coalition, predictably proved to have been used as another pretext for sectarian violence in Iraq. In particular, the militia units who took part to the conflict, namely belonging to the umbrella organization known as al-Hashd al-Shaabi, were extensively reported of having committed crimes of all sorts against those who managed to escape the city earlier this year.

GICJ would like to remind that these militias (al-Hashd al-Shaabi) are an independent military formation into Iraq’s military force, linked directly to the Prime Minister, as per Office Order 91 issued on 24th February 2016. This means that while legitimizing the group, the decree also formally reinforces its link with the government, which should therefore ultimately respond of its conduct.

As of the 2ndto 5th June 2016, during the fighting in Saqlawiya, a small city 20 km west of Fallujah, over 1,000 civilians fled the conflicts and sought the assistance and help of al-Hashd al-Shaabi militias, whose role is blatantly and allegedly to assure security in the country, according to the government.

However, instead of being provided with the support and assistance they were looking for, the survivors were arbitrarily detained on the claim of allegedly belonging to ISIS. During their imprisonment, the victims were subjected to heinous practices of torture, including stabbing with knives and other weapons, beating up, as well as verbal and psychological abuse of sectarian connotation. Of this lot, hundreds were executed or died as a consequence of the severe torture practices, while others, and precisely 643 of them, simply disappeared.

These facts were indeed confirmed by the High Commissioner for Human Rights in his statement on the 5 July 2016 and by Mr Ján Kubiš, Special Representative of the UN Secretary-General and Head of the UN Assistance Mission for Iraq, in a briefing of the Security Council held on 15 July 2016.

Families have not been informed of their whereabouts or even the reason for their detention, leaving hundreds of wives, mothers and other relatives in absolute despair. GICJ receives daily calls from the family members of the disappeared demanding truth and justice for their loved ones.

Enforced disappearances as an intimidation tool

The list of those disappeared in Saqlawiya contained in our report highlights one important pattern: the victims of the militias’ abductions are mostly members of the same families. This is one striking proof that behind the involuntary disappearances, there is an intentional will to target individuals on the basis of their sect or ethnic origins. Namely, they in fact target the Sunni component of society.

What it is important to truly understand is that the practice of enforced disappearances at the hands of pro-government militias, and in particular those belonging to Al-Hashd Al-Shaabi, are not isolated incidents caused by the misbehaviour of a few individuals vis-à-vis an otherwise impeccable conduct (as the Iraqi authorities claim), but constitute a well-orchestrated strategy of demographical change by the government. Enforced disappearances have in fact become a widespread tool of intimidation in Iraq nowadays, and what happened in Saqlawiya is nor the first or the last case of this.

For what concerns the justice system, Iraq almost completely lacks one. The dysfunctional governance apparatus, combined with the ineffective, corrupted and biased judiciary has translated in a massive lack of accountability for victims of abuses and allowed the great degree of impunity which perpetrators shamelessly enjoy.

GICJ has direct contact with some of the relatives of the victims who have stated they are scared to report the disappearances to the security forces and ask for information on the whereabouts of their loved ones for fear of reprisals. Some of them have reported to have been threatened of losing their places in the refugee and IDP camps if they spoke up. At the same time, any other method of peaceful protest against these abhorrent policies will be met either with violence, as previous cases showcased, or with blatant indifference by the government. Families, in other words, are left in a state of hopelessness and frustration. For these reasons, GICJ called on the OHCHR to help on this matter those who could not be helped otherwise.

What can be done?

The crime of enforced disappearance is a truly despicable one. It breaches international law and it is an appalling violation of human rights, and, if we may add, it is a dark expression of the evil that humanity is capable of.

GICJ therefore has called on the High Commissioner and the Working Group in particular, to take care of this matter with urgency before it is too late. We fear in fact that those who have disappeared might have suffered the same fate as other thousands of people who have fallen at the hands of Al-Hashd Al-Shaabi militias during previous liberation campaigns (Diyala, Ramadi, Tikrit, Amerli, etc…), that is torture, killing and slaughtering.

One responsibility under the mandate of the Working Group is to request Governments to carry out investigations and to inform the Working Group of the results. This can be also pressurised by the High Commissioner to certain extents. In this context, GICJ has urged both of them not to rely on the Iraqi government on this important duty, because large evidence shows without a doubt that the Iraqi authorities have no intention of bringing the perpetrators to justice, and are instead undeniable complicit. The implication of the government is in fact not hidden nor disguised, as we previously explained, nevertheless the authorities have never even acknowledged the disappearance of these hundreds of persons.

In this respect, it is worth noting that although a Committee of Inquiry was established by the Prime Minister back June 2016 to investigate into allegations of crimes committed by militias, this is in fact chaired by the Chairman of Al-Hashd Al-Shaabi himself, Mr Falih Al-Faydh, and, predictably, has led to no outcome whatsoever.

For all above reasons, GICJ has rather demanded the High Commissioner to call on the Human Rights Council to dispatch an independent commission of inquiry to investigate into all allegations of human rights violations at the hands of militias and urged the Working Group to interfere into the investigations with regards to enforced disappearances.

With its urgent appeals, the Centre aims at obtaining information of the whereabouts of the 643 individuals abducted by the Al-Hashd Al-Shaabi militias in Saqlawiya. This will bring a little hope to the victims’ families that perhaps not all is lost in Iraq, and that a glimpse of justice can be found even in the darkest of places.

List of identified disappeared persons from al-Saqlawiya/Fallujah-Iraq, at the hands of the governmental militias on 2-5 June 2016.

Link to the Arabic version of this article: