The rise of terrorism, the misdirected war on terror and the need for a revitalized response 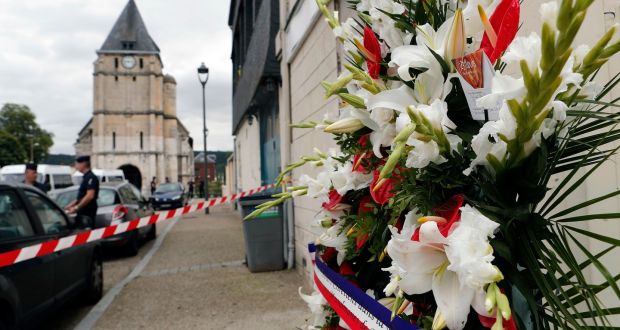 On July 26, 2016, a priest was killed at the hands of two assailants in Saint-Étienne-du-Rouvray, France. The Islamic State of Iraq and the Levant claimed responsibility for the attack. Geneva International Centre for Justice (GICJ) strongly condemns this despicable act of violence and expresses its sincerest sympathies to all those affected by the violence. It cannot and should not be forgotten, and those responsible should face swift justice. At the same time, we must not either turn a blind eye to the pervasiveness of violent terrorism in other parts of the world.

The international community will not accept this heightened rate of terrorist violence as a new normalcy and must take new measures to address it. It is clear that so far state- and intergovernmental responses to terrorism have been both inadequate and misdirected. The growing rate of terrorism and the utter failure of the war on terror strongly point to the need for a new, holistic, and preventive effort that focuses on the root causes of this global violent phenomenon.

Terrorism is on the rise, especially in the Middle Eastern and North African (MENA) region. In fact, in the past 15 years, there has been a 9-fold increase in the number of deaths from terrorism, rising from 3,329 in 2000 to 32,685 in 2014. By far the most severely affected are civilians in the MENA region and Sub-Saharan Africa, regions that together suffered some 74 per cent of the casualties in 2014. In stark contrast, yet individually no less despicable, deaths from terrorism in Europe and North America made up less than 0.01 per cent of the 2014 total.

In light of this, it is important to take a look at the anti-terrorism policies employed in response. The war on terror, proclaimed by the United States in the wake of the September 11 attacks, has so far seen the invasion and occupation of Afghanistan and Iraq, as well as notable military operations in Yemen, Pakistan and Syria. Today all five of these countries fall within the top eight countries with the highest number of deaths from terrorism, and four of them fall within the top five (with Yemen ranking eighth).

This war on terror has, for the vast majority of those affected by it, been an utter and complete failure.  A coalition of states has invaded, occupied, and left several countries in political turmoil, hundreds of thousands of civilians have died, millions have been displaced and human rights violations have soared all over the world. At the same time, terrorist groups and their activities – the very elements the coalition set out to subvert – have flourished.

The case of Iraq provides a shocking example. Prior to the 2003 U.S.-led invasion, the country suffered some 65 deaths from terrorism during the four years of 1998-2002. In 2004, a year after the invasion, that figure had quintupled. And in 2014, the last year for which there is data available, Iraq suffered some 9,929 deaths from terrorism. This number not only serves as over 30 per cent of all global terrorist deaths that year, but also the highest annual death toll from terrorism of any country ever recorded. The Iraqi 2014 death toll is also three times greater than the whole world’s was in the year 2000.

It is also worth noting that these figures do not even include state-sanctioned terror killings. In Iraq for example, one must also include those people killed by the state-supported militias such as al-Hashd al-Shaabi. In 2016, during one incident alone, GICJ sources confirmed that this militia captured over 1,000 individuals in the town of Saqlawiya, killed about 300 of them, and left several hundred with various degrees of torture and burn marks. Some 700 men and boys are still missing. Ján Kubiš, Special Representative and Head of the UN Assistance Mission for Iraq (UNAMI), confirmed these reports as he addressed the Security Council on 15 July 2016.


The human rights record of terrorism and counter-terrorism efforts

The human rights record of both organized terrorist groups and actors that have adopted counter-terrorism policies is egregious and worsening. In war-torn countries where terrorism is rife and increasing, abductions, rape, killings, and a plethora of various other forms of human rights abuses are now commonplace. Non-state actors that roam and ravage these countries can do so largely due to the country being the host of a political vacuum in which any modern conception of law and order has broken down.

However, it is equally important to note that also governments that employ anti-terrorism policies have systematically been found guilty of violating human rights. At the hands of the U.S.-led coalition there have been cases of extrajudicial killings, torture and prisoner abuse, enforced disappearances, and extraordinary renditions. Legal and practical safeguards, such as regular and independent monitoring of detention centers, have often been disregarded, as has the international obligation of non-refoulement, and civil liberties have been restricted.

At the hands of afflicted governments, in turn, the independence and impartiality of judiciaries have been undermined, anti-terrorism laws have been enacted for political ends, and repressive measures have been used to stifle voices of human rights defenders. Legitimised by a national fight against terrorism, government-sanctioned torture, arbitrary detentions and extrajudicial killings are unfortunately commonplace in some of the most stricken areas of the world.

The United Nations system has failed to assert itself as a sufficiently important player in the fight against and prevention of terrorism. While the 2006 Global Counter-Terrorism Strategy and the 2016 Plan of action to Prevent Violent Extremism are welcomed initiatives, they are severely insufficient. Perhaps most notably, these do not provide adequate mechanisms by which the UN can hold member states accountable for failing to uphold their obligations under international treaties on terrorism. Such mechanisms will be crucial if the United Nations is to effectively prevent and avert terrorism.

The structural and political inequalities that characterize the United Nations also play in to the institution’s inability to assume a more central role in the fight against terrorism. Most importantly, the power configurations of the notorious Security Council and the veto power vested in the permanent five state members have repeatedly contributed to the United Nations’ failure to effectively deal with the global threat.

That being said, it is clear that stark political divisions mar not only the Security Council but also numerous other member states, and this polarization has made it hard for the for the United Nations to establish one unified, clear vision as to what role it should play in the international fight against terrorism. Yet in the view of GICJ, the continuous and tumultuous growth of terrorism as well as the intensification of terrorist attacks clearly warrant that the United Nations should embrace the struggle against terrorism and make it on of the core priorities of the institution.

It is crucial for all actors concerned that they remind themselves that terrorist violence has and continues to claim the lives of people from all regions and all religious walks of life. While today we mourn the death of a French priest, we must not look back far to see the targeting of the Prophet’s Mosque in Medina, as well as the killing of Imams in Iraq.

A universal threat necessitates a comprehensive and internationally united response. In light of the surge and intensification of violent terrorism it is clear that our current counter-terrorism measures is in need of a serious revision. It is time for a for a counter-terrorism regime in which governments and intergovernmental actors put their differences aside to face this universal scourge together.

Unity in action is needed if we are to address the root causes of this global affliction. We must refrain from the temptation to answer hatred with hatred in a vicious spiral of violence. We must ensure that all actors involved are held equally accountable before international legal standards. And most importantly, we must recognize that short-term measures will not provide long-term solutions. What we need is a revitalized, holistic and preventive response.