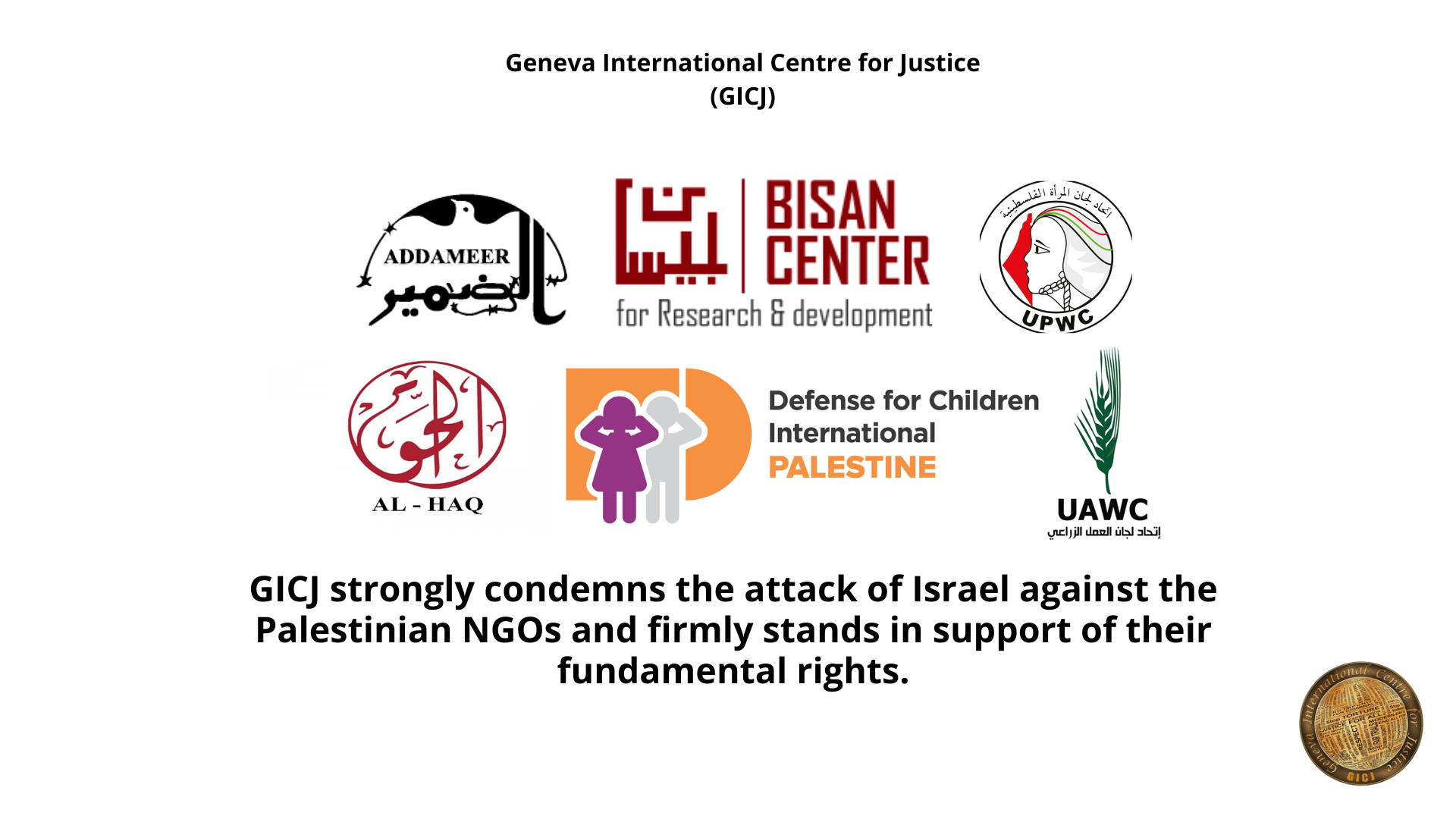 A total of six Palestinian non-governmental organisations (NGOs) were closed by Israel on Thursday 18th August. The military raids in Ramallah resulted in ransacked offices and confiscated equipment.

Among the six organisations were Addameer Prisoner Support and Human Rights Association, the Al-Haq rights group, the Union of Palestinian Women Committees (UPWC), the Union of Agricultural Work Committees (UAWC), Bisan Center for Research and Development, and the Palestine chapter of Defence for Children International and Union of Health Work Committees (UHWC). The outlawing of these organisations has crippled the Palestinian’s Human Rights and Humanitarian sector. Israel’s actions towards shutting down Palestinian Human Rights organisations is to prevent them from documenting the violations by Israel. These actions have placed a strain on the humanitarian sector, especially because the UHWC operates several hospitals and clinics across the occupied West Bank. Without its support, Palestinians will continue to suffer with a weakened healthcare system and with nowhere to get urgent help.

In October 2021, Israel banned the seven NGOs accusing them to have ties with the Popular Front for the Liberation of Palestine (PFLP) and labelled them as "terrorist" organisations. A decision that was widely condemned and criticised by the international community.

Restrictions on Civil Society in Palestine

Palestinians are mired in insurmountable complications in their operational realities. Palestinian organisations are not only battling multiplying needs, but also political, legal, and financial restrictions that are slowly eroding their resilience in a prolonged context. The global war on terror has strengthened Israeli counter-terrorism restrictions. It is becoming increasingly apparent that Palestinian NGOs are being weaponised with counter-terror laws without a united response from donors [1]. The most recent example is the designation of the six organisations that took place on Thursday, 18th August 2022.

Israeli occupation imposes immense burdens on Palestinian NGOs on a daily basis. Due to restricted freedom of movement, staff members are restricted to certain areas based on their civil documents, and their ability to obtain permits is unpredictable. In the West Bank, there are numerous checkpoints and designated roads for Palestinians to travel on, typically congested. In Gaza, employees cannot move in or out without permission that is almost impossible to obtain. Both in the West Bank and Gaza, the military occupation and blockade suffocate daily life and many Palestinian NGOs, which strive to improve people's lives, face these obstacles along with delays in providing essential humanitarian aid [2].

Engagement with Civil Society in Israel

According to Israel they claim to be democratic civil society, characterised by diversity and pluralism. These include civil and human rights, democracy, minority rights, environmental protection, gender equality, social justice, and welfare, as well as education, culture, and freedom of religion.

Israel believes that they comply with all international standards regarding freedom of expression and association. In its ruling, the Supreme Court declared that freedom of expression is a fundamental human right. Hate speech, incitement to violence, and support for illegal or terrorist organisations are punishable by imprisonment. They are under the impression that there exists a vibrant, pluralistic media environment in Israel, where press freedom is generally respected. However, there is military censorship of certain media outlets when it comes to security-related issues. The Israeli government claims that its civil society organisations (CSOs) are committed to service provision (mostly those outsourced by the government). Thus, by prompting legislation and NGOs harbouring influence in various political spheres, the government is impacting policy dialogue. [3]

However, in practice the state of Israel does not implement these international standards or laws by the Supreme Court. For example, all six Palestinian NGOs were shut down in accordance with the 1945 Defence (Emergency) Regulations, which were issued by the British to quell resistance to their rule. Israeli military authorities have extensively used these regulations to demolish hundreds of Palestinian homes, deport residents, and detain tens of thousands of Palestinians from the OPT in administrative detention since 1967. Palestinian citizens of Israel had also been subjected to the regulations, but not Jewish citizens [4].

Nevertheless, the state of Israel has often used the 1945 Defence (Emergency) Regulations, an archaic law initially issued by the British to quell resistance to their rule, as a loophole. This law allows for an imposition of a military law that legalises arrests of citizens who rebel against the state. Palestinians largely suffer the consequences of these practices. This is a grave breach of the Fourth Geneva Convention and lies in violation of numerous human rights conventions to which Israel is a party [4].