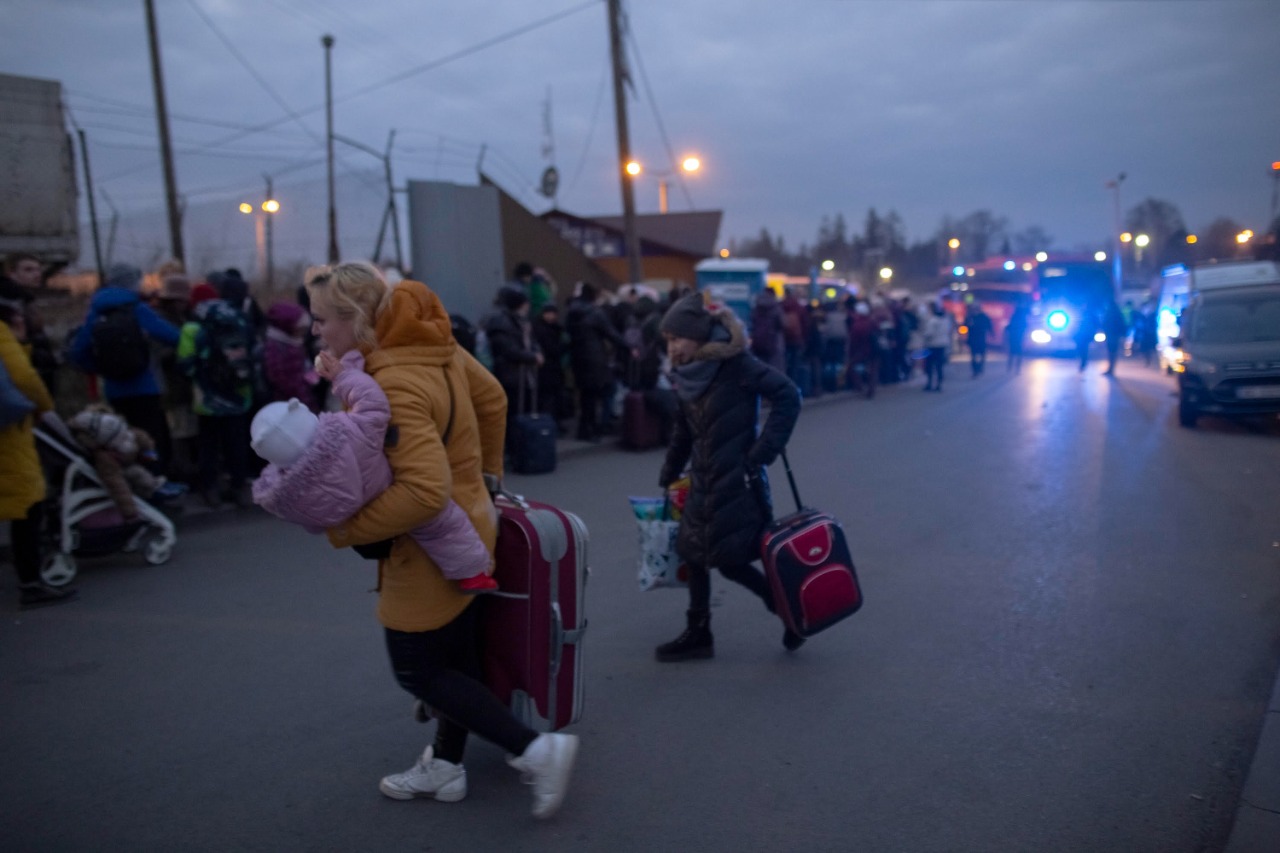 More than a month has passed since the Russian invasion of Ukraine and Ukrainians on the ground continue to suffer from its impact. The number of casualties and forced displacements has continued to rise, while those trapped in Ukraine have been forced to take cover in bomb shelters.

As of April 6, 2022, the Office of the United Nations High Commissioner for Human Rights (OHCHR) has recorded 3,776 civilian casualties: 1,563 dead and 2,213 wounded since the Russian invasion of Ukraine [1]. According to UNHCR data, the total number of refugees fleeing Ukraine has reached over 4.3 million [2].

The World Health Organisation (WHO) has reported more than 64 attacks on health facilities to date, resulting in 37 injuries and 15 deaths since February 24 [3]. 4.3 million children have been displaced, more than half of the estimated 7.5 million children in the country. This figure includes more than 1.8 million refugee children in neighbouring countries and 2.5 million internally displaced persons in Ukraine [4].

Moscow claims to be targeting only military structures, yet there are reports of missiles hitting not only utility infrastructures but also residential areas. Those stranded in Ukraine have been forced to take refuge in bomb shelters. President Volodymyr Zelenskyy's office claims 59 buildings of spiritual significance and more than 200 schools have been shelled across the country since the invasion began [5].

On April 2, the Ukrainian military forces entered to Bucha, which was occupied by Russian forces from 25 February to 31 March. They announce that found dead bodies lying on the streets, bodies in the torture rooms, and in gardens of the civilians. Ukrainian Government claims that the victims were beaten, raped, and shot in the back of the head. City survivors confirm causeless shootings of the civilians by Russian soldiers. Mass Media and Ukrainian Government characterise the massacre in Bucha as genocide. Other abandoned cities by the Russian military, such as Hostomel and Irpin, were distracted, including hundreds of civilian casualties. The Russian Government denied all allegations and called them “Ukrainian provocation”.

Negotiations between the two sides have unfortunately remained unsuccessful to end the war, despite vain attempts by the main UN bodies to stop the hostilities. On March 23, the UN General Assembly held an emergency special session to discuss the adoption of two competing draft resolutions related to the humanitarian situation in Ukraine. The draft resolution "Humanitarian Consequences of the Aggression against Ukraine" (A/ES-11/L.2) called for the immediate cessation by the Russian Federation of hostilities against Ukraine, in particular any attacks against civilians and civilian objects. The other, entitled "The humanitarian situation arising from the conflict in Ukraine" (A/ES-11/L.3), calls for an immediate cessation of hostilities by all parties to the conflict. The representatives from Ukraine, France, Mexico, Poland, Japan, Albania, and the U.S. supported the first resolution accusing Russia of unjustifiable aggression. Russian delegate Vassily Nebenzia rejected both Resolutions, noting that they amounted to a “political anti-Russian show”. On March 24, 2022, the draft Resolution “Humanitarian Consequences of the Aggression against Ukraine” was adopted by 140 votes in favour, 5 against (Eritrea, Russian Federation, Belarus, Syrian Arab Republic and Democratic Republic of North Korea) and 13 abstentions [6].

Russian aggression against Ukraine was also discussed at the UN Security Council. On March 24, 2022, the Russian Federation introduced a draft resolution that urged the protection of civilians and called for unhindered access to humanitarian aid in Ukraine. The draft was rejected by 2 votes in favour (China and the Russian Federation), none against, and 13 abstentions. Several delegates dismissed the draft resolution as an attempt by the Russian Federation to justify its aggression against Ukraine. The Russian delegate criticised the Council’s vote and claimed that the politicisation of the humanitarian issue is more important than providing aid to vulnerable people. Linda Thomas-Greenfield, U.S. Ambassador to the UN, labelled the resolution as “farcical” and assured that the U.S. would continue to provide humanitarian assistance to Ukraine.

On April 5, the UN Security Council held the 9011th meeting on the situation in Ukraine. Russia was accused of the massacre in Bucha during the occupation period. The President of Ukraine, Volodymyr Zelenskyy, urged for necessary measures to establish peace in Ukraine. He called to remove Russia from the Security Council as an aggressor or disband the organisation. His statement was related to the veto power of Russia. Representative of Russia, Vassily Nebenzia, was disappointed that his western colleagues and Ukraine use disinformation in their accusations of Russia. Delegate of Ukraine, Sergiy Kyslytsya, underlined that his colleague Mr Nebenzia used the words “war” and “warfare” during his press conference instead of “special operation” thereby recognizing the Russian War against Ukraine. UN Secretary-General Antonio Gutierrez and speakers of France, Norway, Ireland, and the U.S. condemned the Russian invasion, including war crimes committed by the Russian soldiers. Delegates from EU, Mexico, France, and United Arab Emirates required for the independent Commission of Inquiry concerning hundreds of deaths in Russian left cities.

In March, the Russian troops shelled cities across Ukraine, including Kyiv, Kharkiv, Krivoy Rog, Mariupol, Odessa and others. But at the beginning of April they left the Kyiv, Kharkiv, and Chernigiv regions. On April 5-6, military confrontation continued in the eastern Ukraine.  Mass protests against the Russian occupation are prevalent in Ukrainian cities and villages captured by the Russian army, such as Melitopol, Vodiane, Novopskova, Kherson, Novaya Kakhovka. Several injured demonstrators are reported [7]. On March 1, 2022, the Russian military completely sealed off the city of Mariupol, which had been under a major bombing campaign by the Russian military for over 20 days. As a result, the Ukrainian government is unable to deliver humanitarian aid. The Russian government continues to use false pretexts to justify its aggression against Ukraine, as evidenced by the shelling of a shopping centre in the Podolsk district of Kiev on the night of March 21 which the Russian Ministry of Defence claimed was being used as an ammunition depot by “Ukrainian nationalists”. This resulted in the deaths of 8 civilians and the destruction of several residential buildings.

On March 29-30, the sides of the conflict met in Istanbul, Turkey. Official delegations have met several times before in the territory of Belarus. There were no positive developments before the meeting in Istanbul. But, during the peace talks in Istanbul, delegations agreed to “significantly reduce combat activity”. As a result of the negotiations or for military reasons in the eastern Ukraine, Russian troops were withdrawn from the Kyiv suburbs. On March 10, Ministers of Foreign affairs of Russia and Ukraine Sergei Lavrov and Dmitry Kuleba respectively met within the framework of the Antalya Diplomacy Forum 2022.

Geneva International Centre for Justice (GICJ) condemns all violations of international human rights law and international humanitarian law. GICJ calls on Russia to cease its military aggression in Ukraine and move toward peaceful negotiations. We further urge the international community to take all possible measures to halt the war, protect the people in Ukraine and prevent further human suffering. Steps must be taken to address all injustice resulted from wars and occupations around the world.