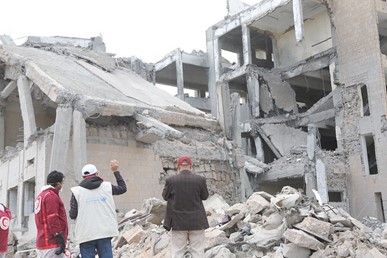 After seven years of fighting, the socio political landscape of Yemen appears to be beyond repair. However, recovery remains possible, according to a UNDP report.

Lasting peace could create an environment favorable to the eradication of extreme poverty, says UNDP. The seven years of fighting opposing the Houthi militia to the legitimate government backed by the Saudi-led coalition have left a starving civilian population, shelled down infrastructure, and generally few means of survival for the population under Houthi rule. Humanitarian aid fails to be effectively delivered due to the blockade, despite the 38.3 million people who acutely need it or rely on it for survival.

According to UNDP, peace is the foundation for the alleviation of poverty. The sources of impoverishment today are not due to the natural condition of Yemen, but almost entirely linked to the protracted conflict and vested political interests in its continuation. After a potential peace deal however, the UNDP report argues that a holistic, integrated approach to recovery could reverse the trend and bring Yemen to middle-income status by 2050. The plan presents inclusiveness and investments as the foundation of recovery. The gender component is particularly important, as women are still given a place too marginal in Yemen. The implication of women should start immediately, notably in peace negotiations. Yemeni women need to be active participants in the search for political solutions for dialogue to be effective and peace to be sustainable.

However, such recovery could only be possible if peace were to happen immediately. Over a million more people could die if the war continued through 2030, due to the lack of access to food and healthcare. Parties to the conflict show no intent to deescalate, as the hostilities move to the Marib governorate. The heavy fighting will affect the one-million population of displaced people in Marib, with low hopes for access to humanitarian aid.

Recovery cannot await the end of the conflict. Humanitarian needs surpass political stakes. The impoverishment of the population will only make conflict more probable and the Houthis more powerful. Relief must be delivered by the government in all accessible areas.

Geneva International Centre for Justice (GICJ) calls for an immediate ceasefire in Yemen. GICJ calls for a return of all parties to political dialogue inclusive of women and minorities. The international community, including all parties involved in the conflict, must ensure that humanitarian aid is delivered safely to the people in need. Finally, we urge countries to stop supplying weapons to the conflict, which only fuels further hostilities.