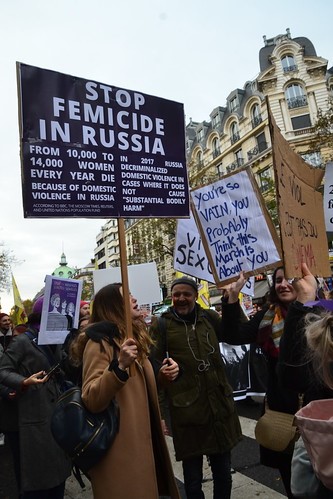 Despite the Russian Republic have made progress, numerous issues still need to be addressed concerning the empowerment of women in the public and political spheres, labor and educational rights, protection of the family and of motherhood, and domestic violence.

During its 80th session, the CEDAW reviewed the country report of the Russian Federation. The Committee urged the Russian government to change its criminal legal system for crimes of sexual violence. Indeed, Victims of rape or sexual assault are redirected to private prosecution, where they have to finance and substantiate their case, carrying all the burden of the proof. This prevents some women from reporting crimes and accessing to justice. The Russian Federation claimed that they were working on redirecting rape and sexual assault proceedings to public prosecution.

The Russian Federation encourages prevention over punishment, claiming that domestic violence had fallen by 50% in five years thanks to this approach. While prevention is important, it should not lead to impunity for perpetrators. The decriminalization of first-time domestic violence (since 2017) and the existence of partial sanctions for crimes against sexual integrity also endanger the protection of women. According to the Federal State Statistical Service, only 18% of women in Russia experience verbal abuse, 6% experience physical abuse, and 1% experience sexual abuse. However, civil society studies point to much larger numbers.

CEDAW experts claimed that the treatment of NGOs in the Russian Federation, including women’s rights NGOs, was problematic. Their classification as “foreign agents” prevents them from acting on the territory. Some members of feminist organizations are being detained. It has been reminded that the civil society participation is essential for the implementation of human rights. They pointed out the 2019 amendment of the Constitution putting national law before international law, which is a clear obstacle to the implementation of the CEDAW in the country.

Stakeholders highlighted the exacerbated risks women face in the North Caucasus and other occupied regions. In these regions, women face a heightened risk of trafficking and abduction. The lack of a real definition for ‘trafficking’ in the Russian Criminal Code, makes it more difficult for victims to access to justice. Women in the North Caucasus also face a greater danger of physical violence and forced, underaged marriage. Their educational rights are endangered. Gender stereotypes and traditional and homophobic values, that have risen everywhere in the Russian Federation, are even more prevalent in these regions, which endangers the full enjoyment of the rights of all women. The Committee asked the Russian Federation what had been done to tackle these inequalities. The Russian Federation affirmed that these regions were also submitted to the human rights standards, and that the government is not responsible for the situation inside of Ukraine.

Geneva International Center for Justice strongly urges the Russian Federation to integrate the prosecution of sexual abuse in public prosecution so that victims have a real access to justice. We also recommend that the existing gendered stereotypes are concretely tackled, since they affect the enjoyment of women’s rights in all spheres, including by enabling domestic violence. The continuing existence of a list of 98 jobs prohibited for women is another example of the harm caused by gender stereotypes in the Russian Federation. This list should be eliminated. Finally, we urge the Russian government to change or repeal the 2019 amendment of the Constitution putting national law before international law, which is a clear obstacle to the implementation of the CEDAW in the country.