Women’s rights in Yemen were discussed during 1825th meeting of the 80th session of the Committee on the Elimination of Discrimination Against Women (CEDAW). The Yemeni delegation pointed to the tremendous obstacles that government programs have been facing due to the protracted conflict with the Houthi militia since 2014. 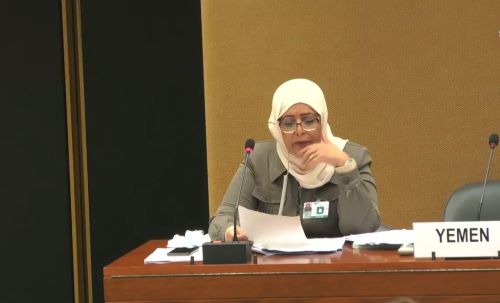 The situation of women’s rights in Yemen is hardly improving. The delegation affirmed its willingness to advance women’s rights in Yemen and its commitments to implementing the ratified international legal instruments. However, they emphasized the obstacles that the war has been posing. The delegation reminded the committee that the Houthis’ effective control of the capital in Sanaa since 2014 has prevented to safe delivery of humanitarian aid, and has left families without assistance. The estimated number of people in dire need of assistance in Yemen amounts to 14 million. Women have been mostly affected by food shortages, displacement, income and education disruption, and destitution.

The delegation claimed to have made progress regarding political representation and the reactivation of the national dialogue and committees dedicated to women’s rights. The delegation blamed the Houthi militia for hindering progress, specifically because of its recruitment of women in the Zainabiyat, a Houthi brigade raiding schools and towns, kidnapping women and girls and converting them into soldiers. Yemen expressed its feeling of helplessness in facing such issues, especially due to the growing territorial control by the Houthis. The Houthis also prevent girls from going to schools and refuse to pay the teachers’ salaries in the areas they control, another issue that the delegation brought up as far outside the reach of the government.

CEDAW committee experts emphasized the importance of including women in peace and reconstruction processes, showing that efforts for women’s rights should not wait for the resolution of the conflict but will actually enable sustainable peace to be implemented. Experts deplored the clear setback that the war is forcing onto the women of Yemen: women represent a working potential for the country’s reconstruction, a potential which is largely left untapped.

The discussion revolved around the obstacles to the implementation of CEDAW articles. The experts pointed out that Houthi control of North Yemen should not prevent the Southern government from legislating in favor of women’s rights. Specifically, experts mentioned the problem of nationality, as Yemeni women who marry outside the Muslim faith lose their nationality or fail to pass it down to their children. Other legislative issues concerned the draft Constitution of 2014, which frames women as “the sister of man with duties and responsibilities”, underage marriage, women’s access to employment, social protection and education.

The delegation answered that issues of legal developments arose from the main source of law in Yemen, being Islamic law. However, experts accused the delegation of using religion as a justification for cultural patterns, and several of them argued that nothing in Islam should prevent women from having an equal position in society.

Geneva International Center for Justice believes that the Houthis pose a real threat to women’s enjoyment of basic rights and freedoms. Specifically, instances of gender-based violence and sexual exploitation has been brought to light by various reports and needs to be halted. Moreover, the government cannot continuously hide behind the religious predicaments to justify the lack of improvement of women’s legal rights in Yemen. Considering the expert’s interventions, Islam itself does not constitute a barrier to gender equality and therefore cannot be used as a façade for a lack of political will to improve women’s rights.