On 31 October 2003, the General Assembly adopted the United Nations Convention against Corruption and requested that the Secretary-General designate the United Nations Office on Drugs and Crime (UNODC) as secretariat for the Convention’s Conference of States Parties under resolution 58/4.

The Assembly also designated the 9th of December as International Anti-Corruption Day, to raise awareness of corruption and of the role of the Convention in combating and preventing it.  The Convention entered into force in December 2005.

Corruption is the single greatest obstacle to economic and social development around the world. Every year $1 trillion is paid in bribes while an estimated $2.6 trillion are stolen annually through corruption. This does not just steal money from where it is needed the most; it leads to weak governance, which in turn can fuel organized criminal networks and promote crimes such as human trafficking, arms and migrant smuggling, counterfeiting and the trade in endangered species.

Corruption is a complex social, political and economic phenomenon that affects all countries. Corruption undermines democratic institutions, slows economic development and contributes to governmental instability. It attacks the foundation of democratic institutions by altering electoral development, perverting the rule of law and creating bureaucratic dilemmas whose only reason for existing is to seek bribes. 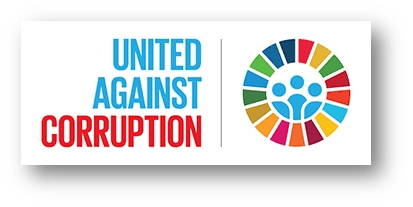 Private sector companies should initiate a zero-tolerance attitude towards corruption and put policies in place covering issues such as gifts, supply chains and whistleblowers, in order to promote a fair and just environment. Through their actions and attitudes towards corruption, the business community can promote fair competition by working together and supporting countries in developing and strengthening the public anti-corruption infrastructure.

The media and citizens around the world are joining forces to fight this crime. Many civil society organizations are working hard to raise awareness, channel information from citizens to the State and exert pressure for political commitment against corruption.

A former United Nations Deputy High Commissioner for Human Rights has also been vocal on this issue. Ms. Flavia Pansieri, on the occasion of a side-event on sketching a human rights approach to corruption, remarked that throughout her career in the United Nations she had witnessed the devastating impact of corruption on societies and how difficult it is to rectify corruption, especially where it is common and has worked its way to the top of the chain of command.

Ms. Pansieri noted that there is no internationally agreed definition of the term “corruption”, so its meaning is to some extent determined historically and culturally and changes over time. That’s why states are requested to have a broad legal meaning that is structured in the same way as with bribery and embezzlement. She was pleased to note that scholarly literature looks at the multiple connections between human rights and corruption,

In its 2015 final report on the issue of the negative impact of corruption on the enjoyment of human rights,  the Advisory Committee recommended that the definition of corruption not only include the three specific elements, “abuse”, “entrusted power” and “for private gain”, but that it should also include as an example the abuse of illegally claimed power that can lead to corruption.

•    Corruption in the Public Sector can happen in any public organisation like governments, administrations and legislatures and in the judicial system. In this case the state is responsible for any human rights violation that happens.

•    Corruption in the Private Sector can happen when private companies bribe state officials or other companies (commercial bribe) or when they accept a bribe. In this context the non-state actors are themselves responsible for the acts of corruption they perform.

Although there is corruption in the private and public sectors, the state still has the duty to protect against any human rights violations arising from acts of corruption from both sectors.

In what respect does corruption have a negative impact on the enjoyment of human rights?

a)    A violation of human rights may occur as a result from a corrupt act;

Developments over the years have established that there is a clear linkage between the negative impact of corruption and impairment of the enjoyment of human rights. 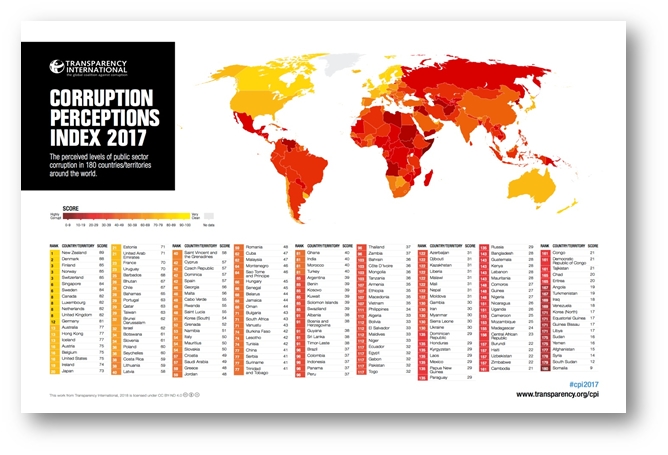 Classifications of the possible violations of human rights caused by corruption;

a)    Individual negative impact: most of the time there are direct violations of the human rights of the individual who is affected by corruption. The impact on individuals can either be direct or indirect effect from corruption.

b)    Collective negative impact: this impact not only affects individuals but also groups of individuals. It can be said that vulnerable groups such as women, children, disabled people, elderly people, the poor and minorities are the people mainly affected by corruption. On 13 March 2013 at the Human Rights Council’s panel discussion on the negative impact of corruption on the enjoyment of human rights, the former High Commissioner for Human Rights referred, as an example of the negative impact of corruption on the enjoyment of human rights, to vulnerable groups’ access to justice being undermined. Sometimes, corruption is only one element of a human rights violation or one factor aggravating an already existing human rights violation concerning specific groups. For example, if the right to education of certain vulnerable groups is already violated as a result of discriminatory access requirements, the demand by an official for payment of a bribe compounds the human rights violation. Another example is persons deprived of their liberty, who can be victims of corruption, and at the same time, of inhuman or degrading treatment.

c)    General negative impact: Corruption can affect a society at large, meaning that not only individuals and groups are affected by corruption but there is also a negative impact on society. Two main aspects are mentioned frequently in discussions of the negative impacts of corruption on human rights. Firstly, the financial and economical resources affected by corruption. Corrupt practices redirect the funds from development, reallocate the funds that may have been used for the enforcement of human rights, and reduce the available resources for the progress of the economic, social and cultural rights. Secondly, this aspect is related to democracy and the implementation of the rule of law. If corruption reaches the highest authorities, the people’s confidence in the government and in the order of democracy would be damaged.

Corruption and human rights: the “non-victims”

When looking at corruption and human rights the main focus is on the victims of corruption and the negative impact on the enjoyment of human rights, but there are other actors or people involved that shouldn’t be disregarded such as:

Journalists – play a very important role in spreading information, raising awareness and fighting against corruption. The information they provide is an essential precondition for transparency and responsibility. They always come under pressure because of their reporting. They may be prosecuted, defamed, harassed or even attacked. States are obliged to guarantee freedom of expression but also any other human rights that may be violated by means of threats or attacks against journalists.

Whistle-blowers - Whistle-blowing can be a valuable element in the fight against corruption in both public and private entities. Although a number of elements need to be examined about the behaviour of whistle-blowers, they can play an important role as insiders who bring incriminating facts to the knowledge of the public.

Your NO Counts campaign

The Your NO Counts campaign, aimed to help promote the international Anti-Corruption Day (9th December), started in 2009. 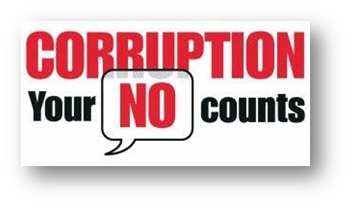 Its goal was to increase awareness of corruption and to raise the public profile of anti-corruption work.
In 2010 the Your NO Counts campaign’s main message was how corruption affects education, justice, health, democracy, prosperity and development. The slogan was created to encourage people to take a stand against corruption with the phrase “your no counts” meaning saying NO makes a great impact.

Corruption is a global problem that requires global solutions. GICJ recommends keeping citizens engaged in fight against corruption at local, national, international and global levels, in line with the scale and scope of corruption and to make use of the architecture that has been developed and the platforms that exist for engagement. Countries that suffer from chronic fragility, conflict and violence are often the ones that have the fewest internal resources to combat corruption. The international community must identify ways to leverage international resources to support and sustain good governance in states and companies across the globe.