This update has been developed by Geneva International Centre for Justice (GICJ) in order to give a clear idea about the situation in Iraq to help Decision Makers with respect to the cases of Iraqi refugees and asylum seekers. GICJ regularly tracks and addresses issues of justice and accountability pertaining to human rights in Iraq. GICJ is an international, independent, non-profit, non-governmental organization, headquartered in Geneva, Switzerland, that maintains partnerships with various NGOs, lawyers and a vast civil society network within Iraq and across the Middle East region. Through these channels, GICJ receives documentation and evidence of human rights violations and abuses in Iraq as they occur. GICJ reports on human rights violations to various human rights bodies within the United Nations system, and brings them to the attention to all member states through its regular participation at sessions of the Human Rights Council. 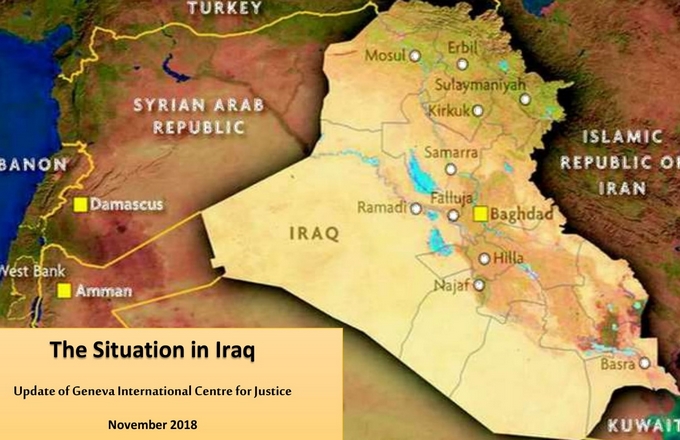 The current situation in Iraq is dire. Innumerable human rights abuses occur daily, spread across the entire country. The abuses include torture and other forms of cruel and inhumane treatment, enforced disappearances, arbitrary detention, media intimidation, suppression of peaceful demonstrations, lack of food and safe water supplies, and an absence of basic services, including access to health care and to education. Although Iraq produces millions of barrels of oil every day, the government fails to allocate even the minimal amount of resources necessary to protect civilians from starvation, disease and uncontrolled violence.

Many of the grave human rights abuses in Iraq are systematically perpetrated, on a large scale, by the government itself, both through its own security and military officials and through its officially-sanctioned militias. For example, GICJ has documented situations in several cities in Iraq where sectarian persecution has led to the targeting of specific families, especially Sunni Arabs, resulting in the mass arrests, disappearances and executions of men and boys from those families by government-affiliated groups. Many face criminal charges without a fair trial and with a high likelihood of conviction. With many charges being brought under Iraq’s vague Anti-Terrorism Law, conviction all too often brings execution even for alleged offences of a non-violent nature.

So far, defeating ISIS has resulted in the destruction of cities and the empowering of militias and outlaw groups at the expense of the security and well-being of the ordinary people. Militias are targeting all those who criticise their behaviour and deplorable human rights records.  As a result, many Iraqis, including those whose families have been persecuted, tortured, convicted and executed, do not feel protected in their country, so they have left Iraq seeking safety and stability wherever they can find it. It is well known that the Iraqi government is rife with corruption, and the rule of law is absent. The justice system lacks transparency, is heavily influenced by the government and militias, and does not respect due process. This means that victims of human rights abuses effectively do not have access to justice in Iraqi courts despite the supposed guarantee of rights by the Iraqi Constitution.

Based on the current situation, it is dangerous for those who have left Iraq to be forced to return because of the very real possibility that they would become targets of sectarian persecution, enforced disappearance, torture or other forms of ill-treatment, or even execution by the government and its affiliated militias. This applies not only to those who were persecuted themselves but also to those whose family members were subjected to the regime. To avert the eyes of the international community away from the government’s failure to protect human rights, to hide total dissatisfaction on the part of the people and to increase its legitimacy, the Iraqi government has been providing assurances to some European countries that the situation has improved. By doing so, the government aims to trick these countries and refugees themselves into thinking that it is safe to return, only to persecute them.

For example, there have been cases in which applications for asylum were rejected because it was not the applicant himself who had been persecuted prior to fleeing Iraq but rather members of his family. However, these persons who had been lucky enough to flee the country to avoid being persecuted themselves are now being sent back under the false pretext that they do not face any risk of irreparable harm. Contrary to this opinion, the same fate that met their family members awaits them too if they are returned.

GICJ notes with deep concern that some political leaders in a number of European countries have started implementing such policies which aim at reducing the number of refugees and asylum seekers in their countries, and which in reality, in other words, stand for sending them back to their countries of origin, including Iraq. These policies correspond to what has been promised in their electoral campaigns. Their practical implications include reducing social assistance to refugees, imposing on them unnecessary security restrictions and preventing them from travelling. For that, we call on all these governments to bear in mind that they are under an obligation to protect those refugees, especially those who have no alternative places to go to and are left at their responsibility. They all deserve to be treated with dignity, respect and no distinction based on race, colour, sex, language, religion, political or other opinion, national or social origin, property, birth or other status.

In addition, forced return or repatriation violates the customary international law principle of non-refoulement, which is articulated in Article 33 of the 1951 Convention Relating to the Status of Refugees, Article 3 of the 1984 Convention against Torture and Other Cruel, Inhuman or Degrading Treatment or Punishment, and stems implicitly from Article 7 of the 1966 International Covenant on Civil and Political Rights as interpreted by the Human Rights Committee. This principle is, in particular in respect of those European countries that are State parties to the 1950 Convention for the Protection of Human Rights and Fundamental Freedoms (European Convention on Human Rights), enshrined in Article 3 thereof.

Following all of the above stated, GICJ hereby appeals to all states who host Iraqi refugees to comply with their international obligations, in particular with the principle of non-refoulement, and not to forcefully send them back to Iraq despite any possible pressure, diplomatic or other assurances provided by the government. Upon their return, these people would face persecution, be often subjected to ill-treatment and at times executed, following proceedings that do not encompasses guarantees of a fair trial.

GICJ remains informed of the situation on the ground and is ready to provide any additional developments.

Click here to read Urgent Letters and Appeals on Iraq by GICJ.