Conducted in Geneva, Switzerland, the workshop was designed to train a group of Palestinian lawyers and human rights activists on the functioning of the United Nations human rights system and mechanisms. The strengthening of the participants’ ability to effectively engage with the relevant UN bodies and the gaining of a deeper understanding of the international human rights mechanisms, in particular of those related to the situation in Israel and the Occupied Palestinian Territories (OPT), was the overarching aim of the training.

On the first day, Mr. Naji Haraj, GICJ Executive Director, introduced the program, including all units and topics to be presented during the training, and highlighted the relevance of each topic in relation to the work of the trainees.

Furthermore, the participants received an overview of the United Nations and its establishment and goals. Mr. Haraj gave a presentation about the history and mandate of the UN bodies, including the establishment of the League of Nations and the subsequent creation of the United Nations. In this context, the participants were provided with a detailed explanation of the UN Charter, the main UN organs, and the status of the International Court of Justice. The main organs of the UN were discussed and light was shed on the development of the field of human rights within the United Nations 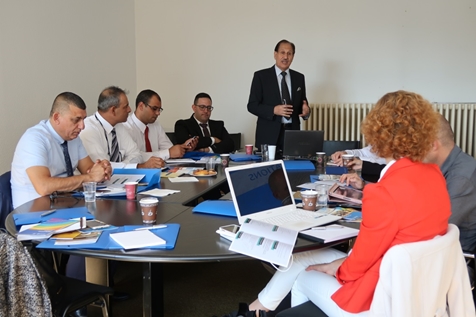 Elaborating on the UN human rights mechanisms in further presentations, the Executive Director focused on the Office of The United Nations High Commissioner for Human Rights (OHCHR), the Human Rights Council (HRC), and the Special Procedures. In this context, he highlighted the importance of the role of NGOs within the UN system, and the ways in which these can interact with the UN bodies, in particular with those operating in the field of human rights.

The training continued with an analysis of the mandate and composition of the UN Human Rights mechanisms, starting with the role and responsibilities of the High Commissioner for Human Rights and his office. Particular attention was devoted to the functioning and structure of the UN Special Procedures, to the difference between the mandates, and to the ways in which mandate holders perform their responsibilities. Mr. Haraj also explained how NGOs and civil society can bring issues to the attention of the Special Procedures mandate holders and request action, including country visits and inclusion of addressed issues in their reports to the HRC.

As a continuation of the theoretic presentation of the human rights mechanisms, the trainees received extensive information on the work of the Human Rights Council, including the mandate of the previous body (Human Rights Commission) as well as the circumstances that led to the establishment of the new body (the Human Rights Council) in 2006. Details on the mandate of the Council, the permanent Agenda, the membership, the regular and special sessions, the decision-making process, the participation of the NGOs in the Council (prior and during the sessions), and the ways in which NGOs can submit written statements and deliver oral statements were also provided 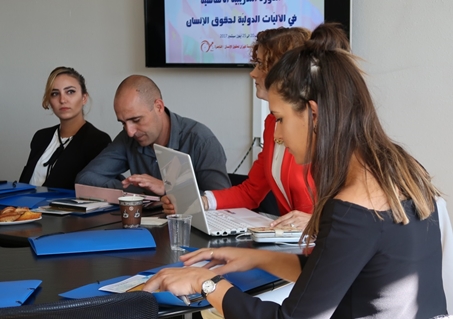 On the same day, the participants were provided with an introduction to the main human rights treaties and with details on the focus and main articles of the two Covenants – the International Covenant on Civil and Political Rights (ICCPR) and the International Covenant on Economic, Social and Cultural Rights (ICESCR) – as well as on the mandate and work of the respective UN Treaty Bodies. By ratifying one of these treaties, a State bounds itself to international obligations and has the duty to guarantee the enjoyment of the rights set out in the treaty by everyone under its effective control.

On the following day, to complement the theoretical insights, the group visited the UN Office in Geneva and attended the 36th Human Rights Council session during the discussions on Universal Periodic Review outcomes under agenda item 6. Here, the participants had the opportunity to experience the interaction of UN stakeholders, Member States, and civil society representatives in the discussions – and witnessed the adoptions of the outcomes of the Universal Periodic Reviews of Bahrain, Ecuador, Tunisia, Morocco, Indonesia and Finland, as well as the outcomes of the United Kingdom, India, and Brazil. 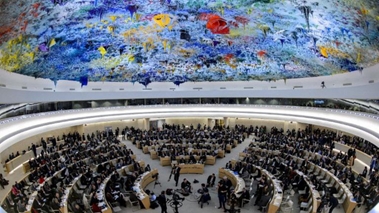 To experience one pertinent way of NGOs’ contribution to the Council, the group attended a side event co-organized by GICJ and several other organizations. During the event, the trainees got acquainted with the way in which panelists share their insights, discuss human rights situations in the respective States with the audience, and develop recommendations. At the concluding part of the side-event, the training participants actively engaged with the panelists and offered their own insights and recommendations to improve the human rights situation.

In continuation of the theoretical training, GICJ’s Executive Director presented the Universal Periodic Review (UPR), through which the Human Rights Council periodically reviews the fulfilment by each Member State of their human rights obligations and commitments. The Executive Director highlighted that the UPR process provides for the participation of all relevant stakeholders, including non-governmental organizations (NGOs), national human rights institutions (NHRIs) and regional mechanisms. 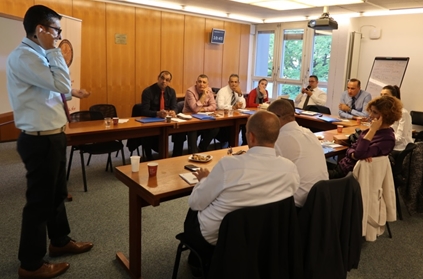 The International Court of Justice was detailed as a crucial organ whose role is to settle, in accordance with international law, legal disputes submitted to it by States and to provide advisory opinions on legal issues referred to it by authorized UN organs and specialized agencies. On this regard, Dr. Amara discussed the question of the Wall Advisory Opinion that was referred to the ICJ in 2004. To deepen the participants’ understanding of the UN human rights treaties and their relevant bodies, as well as the Special Procedure mechanisms, Dr. Amara shared with the participants his organization's, Meezaan, advocacy record that included UPR submission, individual complaints, and written statements. 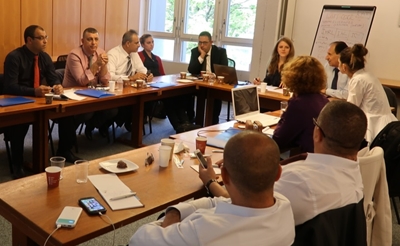 Afterwards, Ms. Lisa-Marlen Gronemeier, the coordinator of the training program at GICJ, conducted a practical training on the interaction with the UN human rights mechanisms. She illustrated civil society engagement with the Human Rights Council in the form of written and oral statements, and explained how actors can write letters and urgent appeals to the Special Procedures, Universal Periodic Review, and Treaty bodies. Following the presentation on the purpose, the contents and structure, as well as on the submission and publication of contributions, the participants worked in small groups to draft their own statements and letters and subsequently presented them to the panel. Some of them would later have the opportunity to deliver their statements at the Human Rights Council.

On Sunday, 24th September, the participants had the opportunity to visit the International Red Cross and Red Crescent Museum. They were invited to a guided tour through the permanent exhibition named “The Humanitarian Adventure”, which presents three contemporary problems through three distinct spaces: Defending human dignity, Restoring family links, and Reducing natural risks. In the exhibition” The Humanitarian Adventure”, the trainees could follow the path through the history of humanitarian action, following the traces of Henry Dunant’s reflections, the 1864 Geneva Convention, and the establishment and development of the Red Cross.

In the space of “Human dignity”, they could witness the strife for respect for the life and integrity of individuals. Particularly, they could explore the notions and struggles surrounding the respect for human dignity through cultural relicts and gain a sense for the need for constant vigilance in the face of arising challenges and crises.

In “Restoring Family Links”, the participants could grasp human beings as social beings, who emerge through their relationships with others. When these are broken, fundamental identification and stability in the lives of individuals crumble alongside them. The exhibition space visualized to the visitors how sending and receiving news and finding loved ones are dire needs – particularly during crisis situations.

In the area of “Reducing Natural Risk”, the participants engaged in a joint activity to take action to save lives and preserve resources in the face of natural catastrophes – thereby demonstrating human experience of and resilience to natural disasters and epidemics. On 25th September, in order to deepen their practical knowledge on the work of the Human Rights Council – particularly with regards to the situation of human rights in the OPT, the trainees attended the Council discussions on 7 and 8, namely the General Debates on the Human rights situation in Palestine and other occupied Arab territories, and on the Follow-up and implementation of the Vienna Declaration and Programme of Action. The General Debate under Item 6 (Universal Periodic Review) was also held. As part of the practical activities of the training, several participants were given the chance to prepare and deliver oral statements at the Council. 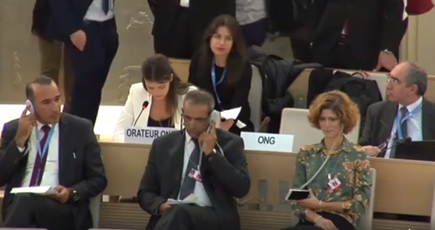 On the same day, the participants visited the Office of the High Commissioner for Human Rights, where they had the opportunity of meeting Mr. Mohammad Ali Alnsour, Officer in Chief of the Middle East and North Africa Section (MENA). Mr. Mohammad Ali Alnsour explained to them the work of the OHCHR and of its regional offices around the world. Furthermore, the Officer in Chief provided intriguing insights into the work of the MENA section and its engagement on the ground in the Middle East and, in particular, in Israel and the Occupied Palestinian Territories. The group had the possibility to pose relevant questions and delve deeper into the activities of UN Human Rights Officers.

On the last day of the training, the participants attended the continued discussions on Item 8 and Item 9, which included the General Debate on Racism, racial discrimination, xenophobia and related forms of intolerance, and the follow-up and implementation of the Durban Declaration and Programme of Action (DDPA). Some participants had the opportunity to deliver oral statements. 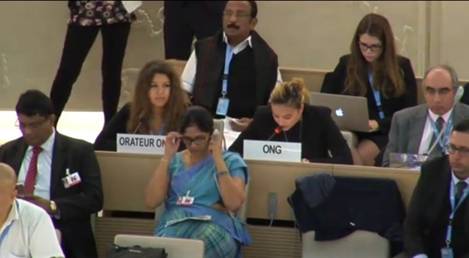 In the face of rising tides of racist violence and xenophobia in many parts of the world, the debates around Items 8 and 9 were heated yet insightful. In this regard, the participants could witness States’ and civil society’s interaction with the DDPA. Adopted at the 2001 World Conference against Racism in Durban, South Africa, the DDPA is an encompassing, action-oriented document that outlines specific measures to combat racism, racial discrimination, xenophobia and related intolerance. 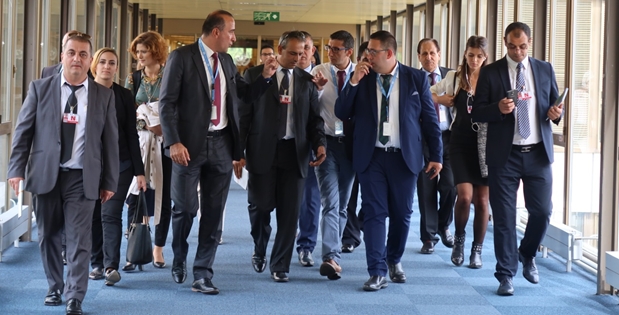 In the concluding part of the training, the group had the possibility to interact with GICJ to share their assessment of the content and the most relevant aspects of the course. Moreover, the participants were asked to evaluate the training methods and the received knowledge. The trainees expressed their high appreciation of the training, describing is as unique experience to receive deep insights into the UN system and its human rights mechanisms. The trainees also agreed on the relevance of the information and knowledge gained with regards to their professional activities. GICJ is also grateful for the valuable suggestions that will allow for further improvement of the training program.

Finally, a closing ceremony was organized, during which each trainee received a certificate in recognition of the successful completion of the workshop on International Human Rights Law and Human Rights Mechanisms.