The workshop, which took place in Geneva, Switzerland, was designed to train a group of Palestinian lawyers on the functioning of the United Nations human rights system and mechanisms. The aim of the training was to enhance their ability to communicate with the relevant UN bodies and to allow them to gain a deeper understanding of the international human rights mechanisms, in particular of those related to the situation in the Occupied Palestinian Territories.

On the first day, Mr. Naji Haraj, GICJ Executive Director, introduced the programme, including all units and topics to be presented during the training, and highlighted the relevance of each subject with regards to the work of the trainees. Furthermore, he focused on the importance of the role of NGOs within the UN system, and on the ways in which they can interact with the UN bodies, in particular with those related to human rights.

On the following day, the trainees received a presentation about the history and mandate of the UN bodies, including the establishment of the League of Nations and the subsequent creation of the United Nations. In this context, the participants were provided with a detailed explanation of the UN Charter, the main UN organs, and the status of the International Court of Justice. The presentation also included information related to the process that led to the establishment of the International Criminal Court as an independent international body responsible for prosecuting those accused of crimes against humanity and war crimes. 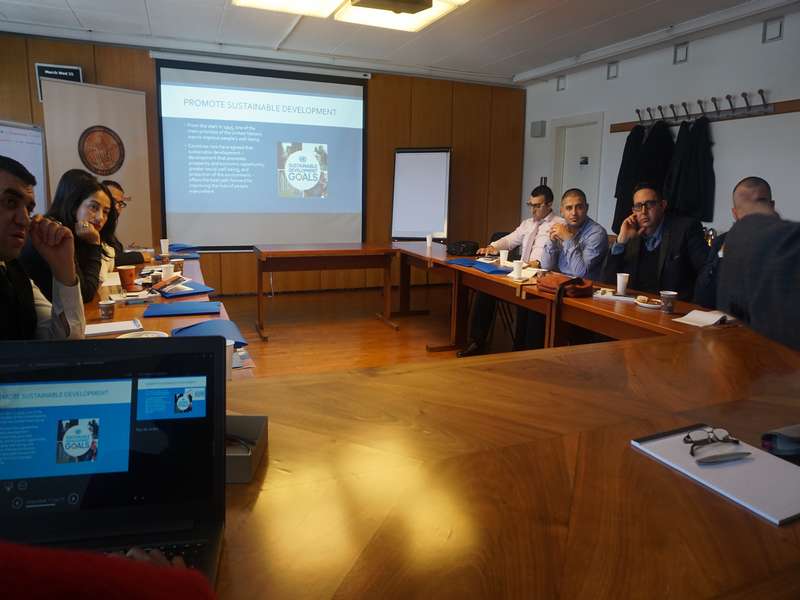 The training continued with an analysis of the mandate and composition of the UN Human Rights mechanisms, starting with the work and role of the High Commissioner for Human Rights and his office, which was established following the Vienna Declaration. Particular attention was devoted to the functioning and structure of the UN Special Procedures, to the difference between “country” and “thematic” mandates, and to the ways in which mandate holders conduct their work. GICJ Executive Director also explained how NGOs and civil society can request country visits, and how they can interact and communicate with the different Special Procedures.

As a continuation of the theoretic presentation of the human rights mechanisms, the trainees received extensive information on the work of the Human Rights Council, including the mandate of the Human Rights Commission and the circumstances that led to the establishment of the new body (the Human Rights Council) in 2006. Details on the mandate of the Council, the permanent Agenda, the membership, the regular and special sessions, the decision-making process, the participation of the NGOs in the Council (prior and during the sessions), and the ways in which NGOs can deliver oral statements were also provided.

On the same day, as part of the practical learning activities included in the training programme, the participants attended the Human Rights Council during the presentation of the report of Ms. Rita Izsák-Ndiaye, Special Rapporteur on Minority Issues, and assisted to the subsequent Interactive Dialogue during which Member States, Observer States and NGOs engaged with the mandate holder, expressing their opinion on the report and on the work of the Special Rapporteur. 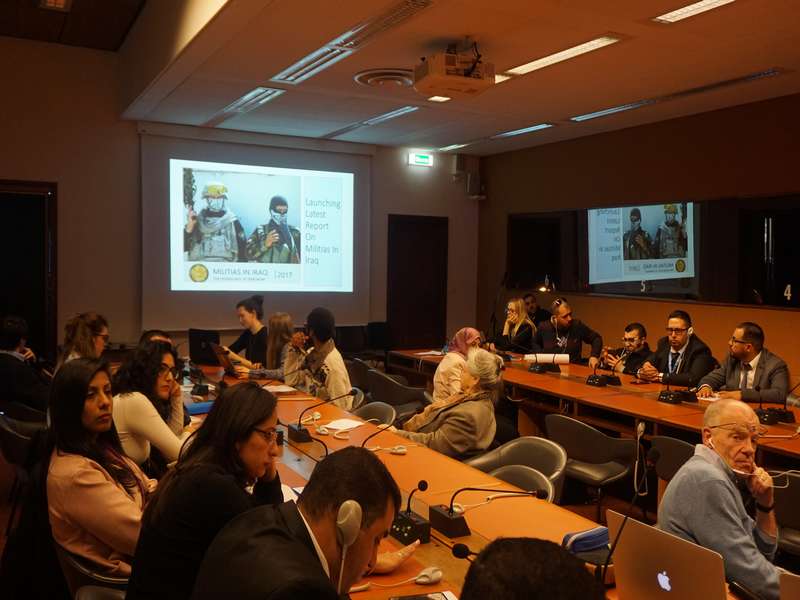 On the third day, the group attended the side event on Human Rights Education entitled “States obligations in preventing incitement to hatred and hate speech” co-organised by GICJ and the International Organization for the Elimination of All Forms of Racial Discrimination (EAFORD). The side-event aimed at shedding light on the negative impact of incitement to hatred and hateful messages promoted by national media and academic textbooks. Such practices, in fact, perilously increase violence, fuel hatred and have the power to shape the minds of new generations. Dr. Nabeel Ali Mohammad Alatoom, expert in Iranian policies, Mr. Ahmed Al Quraishi, policy analyst, researcher and writer, and Mr. Tahar Boumedra, former UN human rights chief at the United Nations Assistance Mission for Iraq (UNAMI) and adviser to the Secretary General’s Special Representative for Iraq, were the high-level panellist who presented their findings and opinions to the audience.

On the same day, the participants had the opportunity to visit the Office of the High Commissioner for Human Rights where they were received by Mr. Mohammad Ali Alnsour, Officer in Chief of the Middle East and North Africa Section (MENA), who briefed them on the work of the OHCHR and of its regional offices around the world. In addition, he provided extensive explanations on the work of the MENA section and its engagement on the ground in the Middle East and, in particular, in Israel and the Occupied Palestinian Territories. The group had the possibility to ask relevant questions and gain precious insights on the activities of UN Human Rights Officers.

On the following day, Mr. Tahar Boumedra, former UN high-level official, introduced the main human rights treaties and provided details on the focus and main articles of the two Covenants – the International Covenant on Civil and Political Rights (ICCPR) and the International Covenant on Economic, Social and Cultural Rights (ICESCR) –  and on the work and the mandate of UN Treaty Bodies. As he explained, the ten treaty bodies are committees of independent experts that monitor the implementation of the core international human rights treaties related to the protection and promotion of rights of women, children, migrant workers and persons with disabilities as well as to the abolition of practices such as enforced disappearance, torture and racial discrimination. When a State becomes party to one of these treaties, it bounds itself to international obligations and has the duty to ensure that everyone in the State can enjoy the rights set out in the treaty.

Later that day, the trainees attended the side event co-organised by Geneva International Centre for Justice (GICJ), the Meezaan Organization for Human Rights, the International Organization for the Elimination of All Forms of Racial Discrimination (EAFORD) and International-Lawyers.org entitled “Israeli Settlements and Violence in the Occupied Palestinian Territories and Israel”. The event examined the interlinkages between Israel’s overall policy of Judaization in historic Palestine, hence in Israel and Occupied Palestine with a focus on the West Bank and the Negev, particularly through unabated settlement construction. Precious insights and testimonies of cases of Israeli violence where given by Mr. Naser Dawabshih, representative of the Dawabshih Family and the Palestinian village of Duma, and by Mr. Ra’afat Badran, father of 15-year-old Mahmoud Badran who was killed by Israeli forces. Dr. Daud Abdullah, director of the London based research institute Middle East Monitor and Ms. Lisa-Marlen Gronemeier, human rights officer at Geneva International Centre for Justice (GICJ), focused on the status of implementation of UN resolutions in the OPT and on the role of the international community and of international institutions in the Palestinian question. 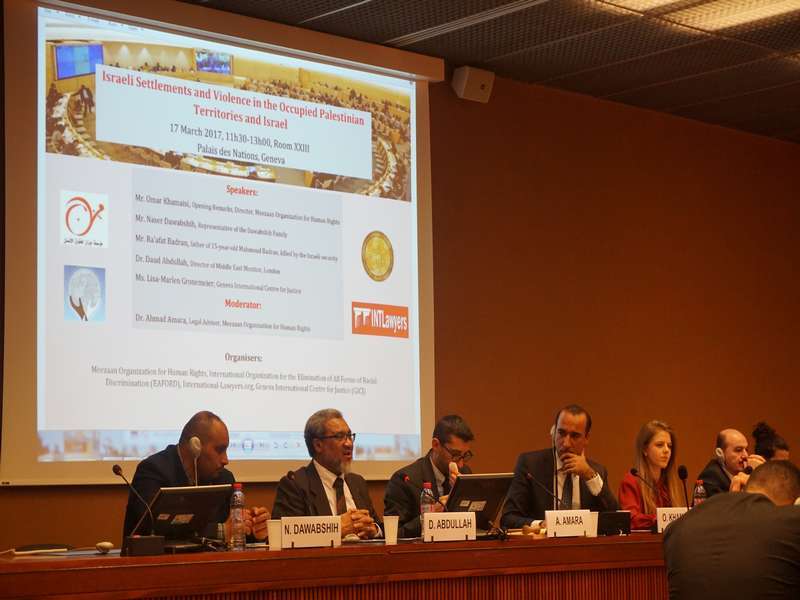 On March 20, in order to deepen their practical knowledge on the work of the Human Rights Council with regards to the situation of human rights in the OPT, the trainees attended the Council discussion on Item 7, including the Interactive Dialogue with the Special Rapporteur on the situation of human rights in the Palestinian territories occupied since 1967, and the General Debate on Item 7 (Human rights situation in Palestine and other occupied Arab territories). As part of the practical activities of the training, some of them were given the chance to prepare and deliver oral statements.

The concluding part of the training included a review session during which the content and the most relevant aspects of the course were revised. Furthermore, during the final stages, the participants were asked to express their evaluations and assessment on the training. The trainees agreed on the importance and the relevance of the information and knowledge gained during the workshop for their professional activities. Moreover, they expressed the desire to participate to the future, more advanced trainings organised by GIC. In conclusion, they generally provided positive feedbacks and useful suggestions that will allow GICJ to further improve the programme in the future.

Finally, the training ended with a closing ceremony, where all trainees received an individual certificate for the successful completion of the workshop on International Human Rights Law and Human Rights Mechanisms.