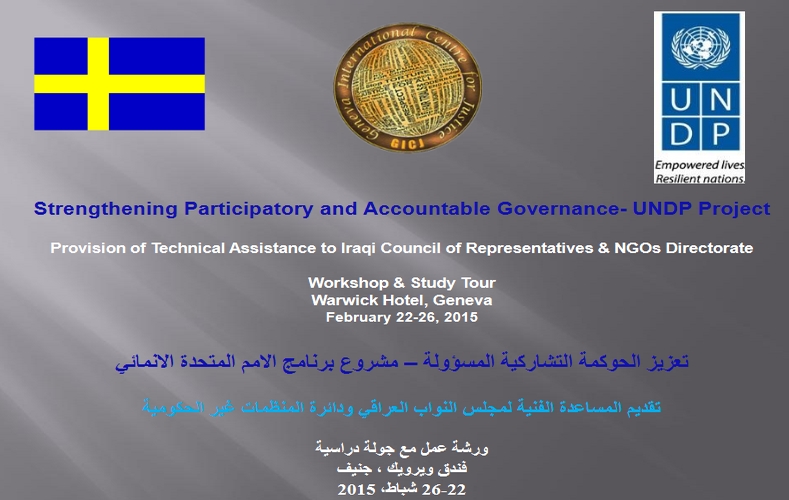 Geneva International Centre for Justice (GICJ), in collaboration with the United Nations Development Programme (UNDP), organised a workshop on strengthening the operational, legislative, outreach, and oversight capabilities of the Iraqi Council of Representatives, as part of the United Nations Development Programme project on “Strengthening Participatory and Accountable Governance”. The five-day programme took place at Warwick Hotel in Geneva, from 22 to 26 February 2015.

The aim of the programme was to present participants to internationally-renowned experts’ experience and knowledge, on the role of Parliament in the protection of human rights, promoting inclusiveness, and participation of civil society in legislative and oversight processes.

The agenda kicked off with the opening session in which Mr. Naji Haraj, Executive Director of GICJ and Ms. Nahid Hussein, Project Manager at UNDP/Iraq, introduced the concept and objectives of the workshop. The President of GICJ, Mr. Hans von Sponek, former United Nations Assistant Secretary General and UN Humanitarian Coordinator, took the floor with a presentation under the title “Iraq and the UN: An Evolving Relationship – Observations of a Former UN Official” and assured the assembly of his unshakeable commitment to engage in a constructive exchange of views in order to get an accurate and up to date picture of the situation of Iraq. 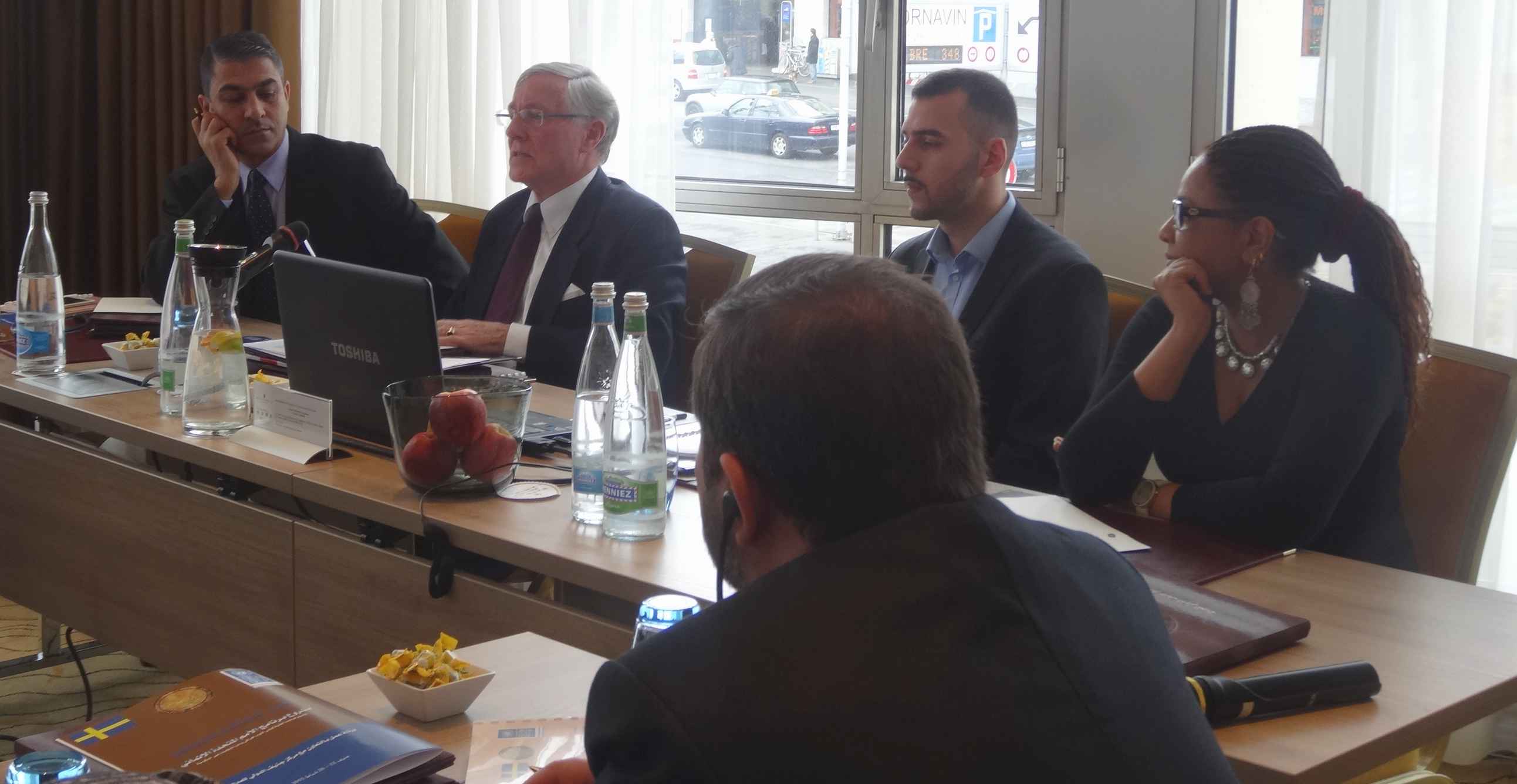 Mr von Sponeck then stated that the importance of ‘knowledge’ is a straightforward issue. The inside (Iraqis) and the outside (external partners) must learn much more about each-other, historically, politically, economically, socially and of course, culturally.

Iraq, in turn, must appreciate why the outside  world, e.g., here in Europe, is so sensitive about the role of religion, the issue of sectarianism and ethnicity, the pursuit of law, the questions of the death penalty and extra-legal executions and more generally of human rights.

Through-out the five days, the delegation had the opportunity to meet with high level personnel from the Office of the High Commissioner for Human Rights (OHCHR), the Inter-Parliamentary Union (IPU), the International Committee of the Red Cross (ICRC), among others. Briefings delivered contributed to deepening the knowledge of participants, shedding light on the importance of the concept of ownership, and the role international stakeholders play in this regard.

Interesting exchange of opinions between the delegation and speakers took place on one hand, and among the delegation on the other. The five-day programme served, as a result, a hub of open dialogue between national and international actors to promote, in the end, effective oversight and governance of the legislative authority. 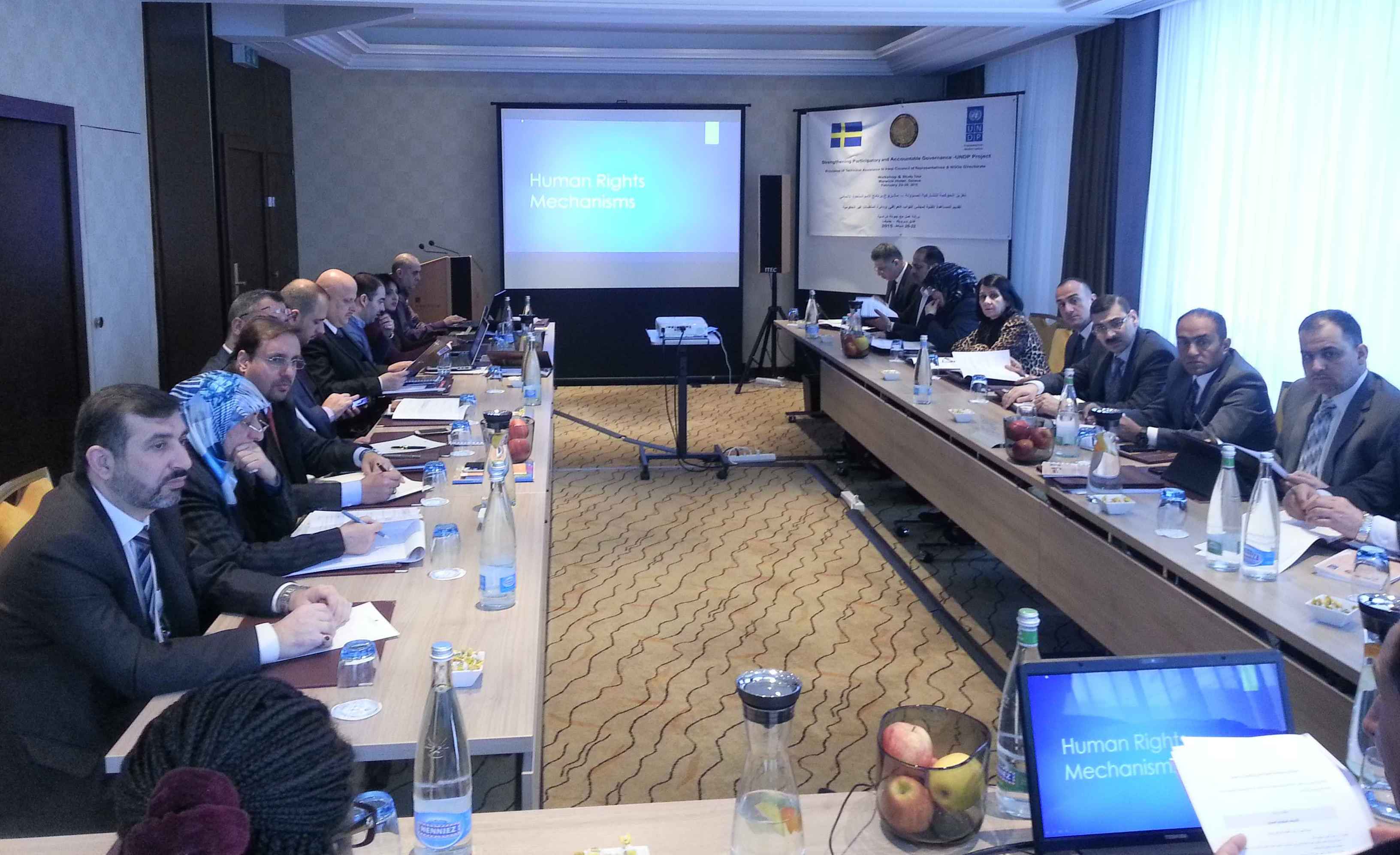 Following this presentation, GICJ organised a visit to the Office of the High Commissioner for Human Rights during which a Human Rights Officer for Iraq presented the role of the Middle East and North Africa (MENA) section in monitoring the human rights situation in Iraq. The Chief of the Rule of Law, Equality and Non-Discrimination Branch at the OHCHR then gave a presentation on promoting the rule of law in Iraq.

The Inter-Parliamentary Union and the ICRC

The morning session was dedicated to the work of the Inter-Parliamentary Union. An overview of the IPU mandate was provided by the Director of the Division of Programmes together with the Senior Advisor to the Secretary General at the IPU. 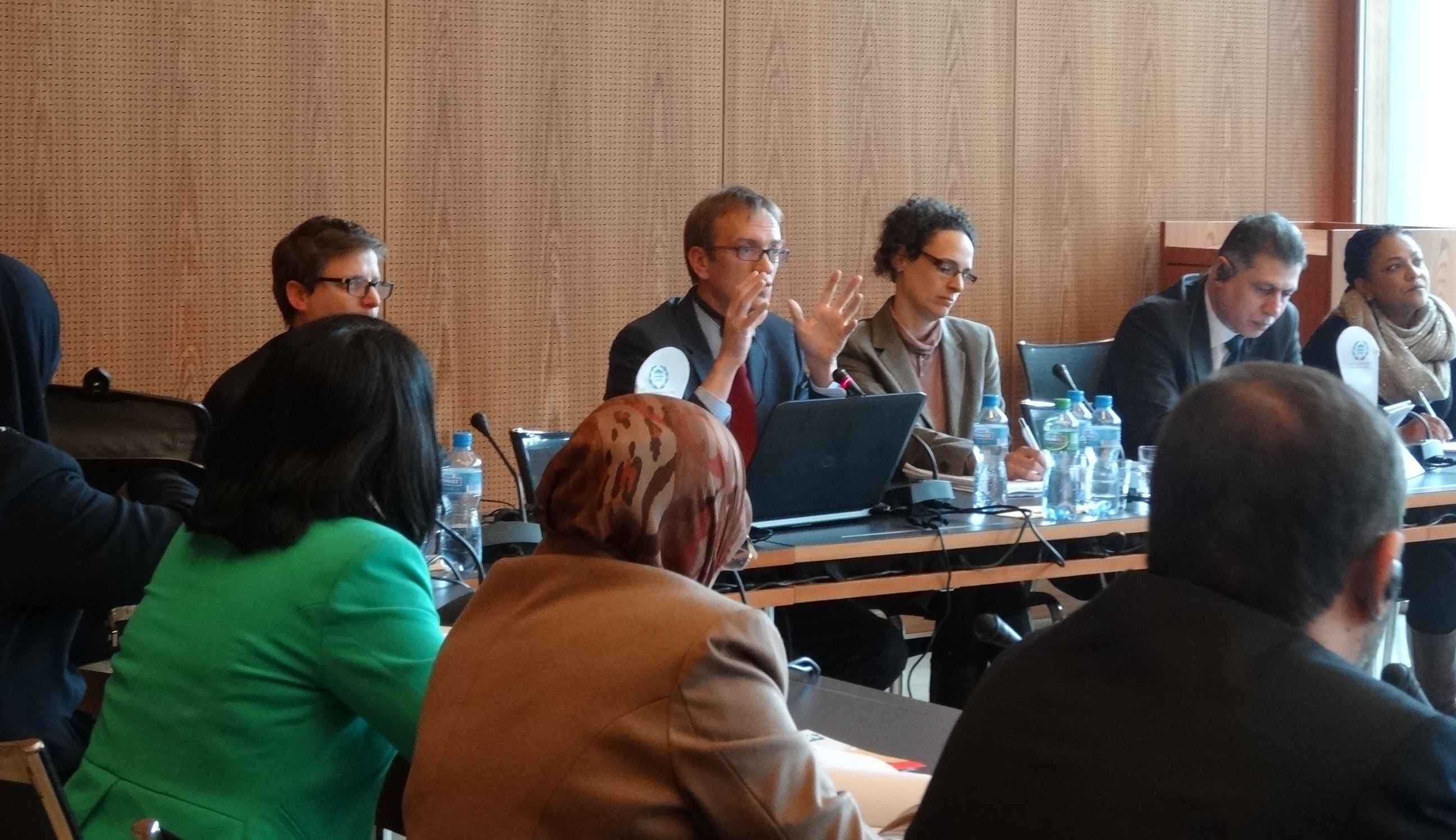 A member of the UPR Division of the OHCHR presented the role of parliamentary committees in implementing UPR recommendations, and Mr Naji Haraj from GICJ talked about the UPR and means of cooperation between non-governmental organizations and national parliaments. 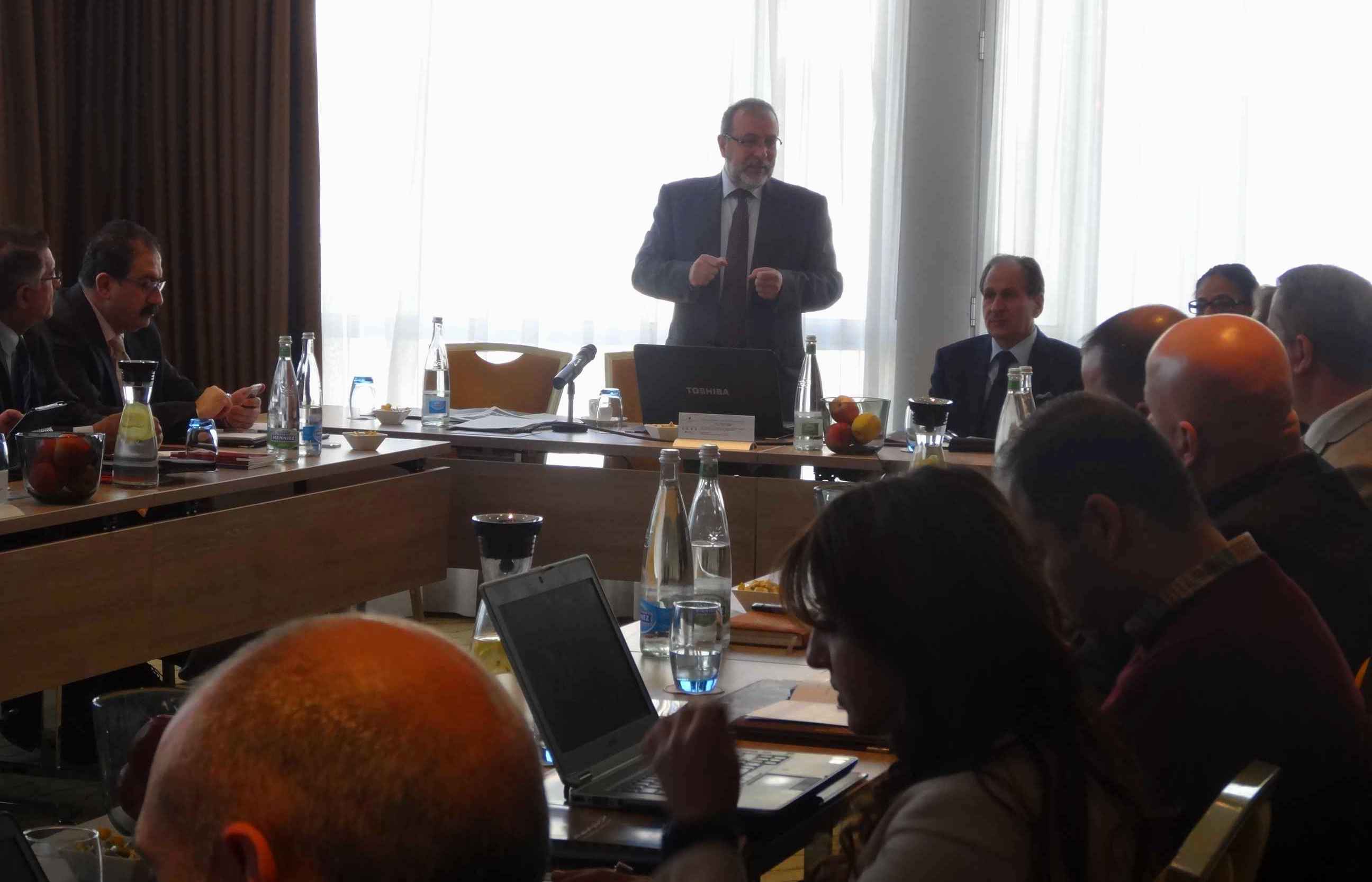 The afternoon session was made of a presentation by an Associate Expert at the OHCHR on Iraq issues before the United Nations treaty bodies and a presentation on the role of parliamentary committees in response to Iraq’s treaty obligations, and how to harmonize national legislation with the Treaty obligations of Iraq by a Member of the UN Working Group on Enforced or Involuntary Disappearances.

The participants were introduced to the work of the CEDAW Committee and attended its session, after what GICJ organised a discussion on the different subjects covered by the programme during the week. The programme ended with the closing ceremony during which each participant received a certificate of attendance to the workshop. 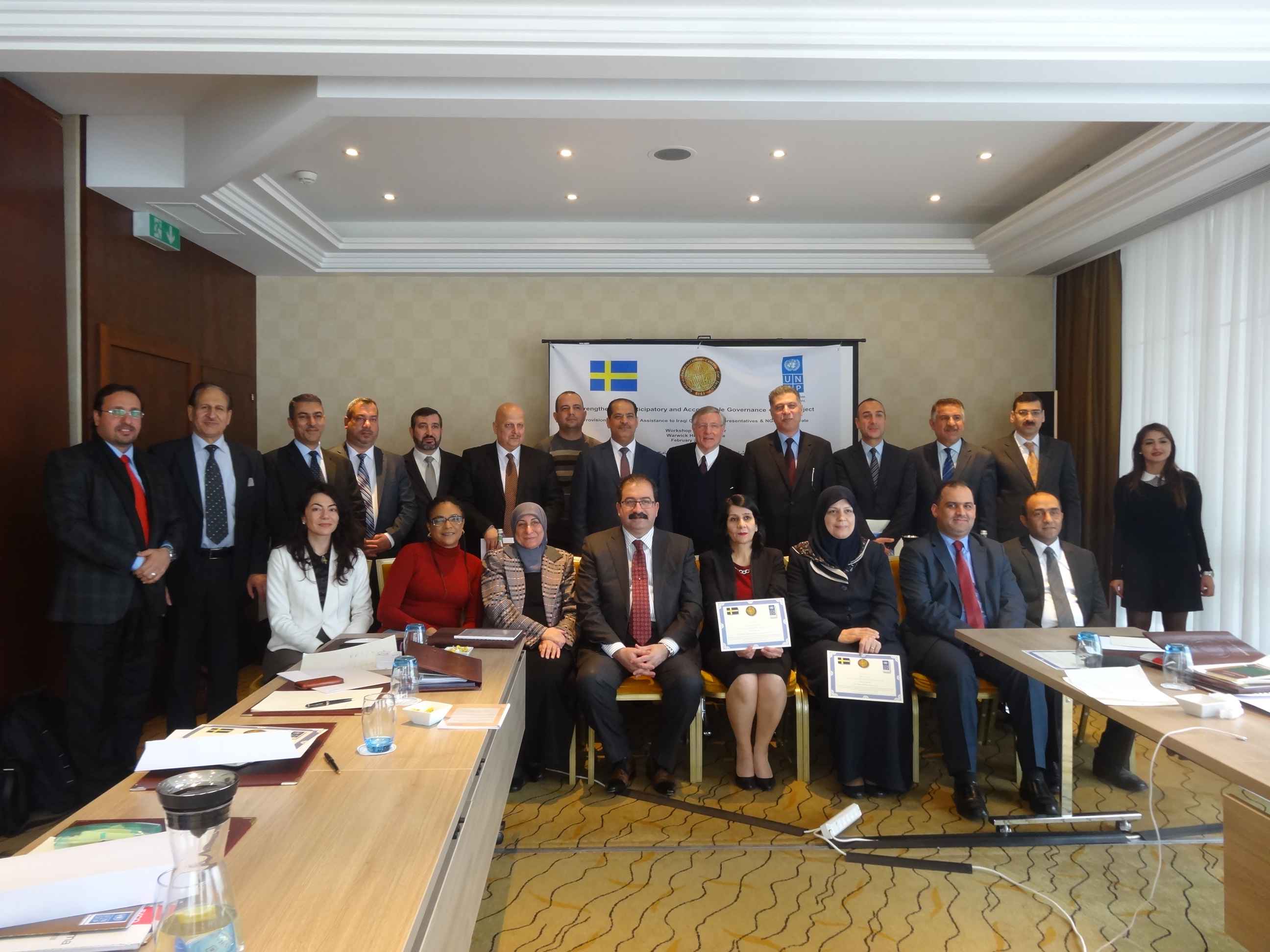 Pictures taken during the workshop: