With this comprehensive, analytical report, Geneva International Centre for Justice wishes to provide a general overview of the Syrian civil war, one of the deadliest conflict of our decade, and on its repercussions on the civilian population – and on the entire world.

After years of growing discontent and internal tensions, the protests against the Syrian government intensified in 2011, and quickly escalated into a civil conflict. Six years after, the number of parties involved in the fighting has grown exponentially, and the frontlines have shifted repeatedly – thus further complicating the achievement of diplomatic settlements. In its report, GICJ analyses the involvement and the actions of all stakeholders – the Syrian government, rebel groups, terrorist organizations and international coalitions – as well as their strategical and political interests in the region.

While providing a comprehensive overview on the political and legal context of the conflict, GICJ focuses its research on the human rights situation in the country and on the impact of the conflict on the civilian population. The report explores the violations and abuses committed by all parties to the conflict, including the crimes of torture, use of prohibited weapons (including chemical weapons), arbitrary arrest, enforced disappearance, unlawful detention of activists and human rights defenders, summary executions, attacks on medical facilities, denial of humanitarian access, and prolonged sieges. Moreover, GICJ devotes particular attention to the conditions of women, children, and persons with disabilities – some among the most vulnerable segments of the population.

In its report, GICJ also analyses the basic needs of the over 13.5 million persons trapped in the war-torn country. While the majority of the population continues to face problems linked to the lack of medical facilities, food, shelter, water and sanitation, international agencies and local humanitarian workers are not able to meet the population’s needs nor to provide the needed support on a sustained and timely manner because of severe operational challenges.

Furthermore, the report also examines the devastating consequences of the six-year-long conflict, which triggered negative consequences and worsened the already fragile conditions of a developing country and a modernising society. The level of economic and social development has been pushed back of twenty years, and the next generations will inherit the rubbles of a once dignified country. Thousands of families live in extreme poverty, the lack of employment opportunities is sinking many into debt, children are out of school, and an entire generation risks to be completely annihilated. Moreover, the incessant fighting and the widespread violence forced over 4.7 million people to leave their country, and caused the forcible displacement of 6.3 million civilians.

In the concluding section of the report, GICJ evaluates the involvement and the role of the United Nations in this context. In addition to setting up an independent Commission of Inquiry to investigate and report on the crimes committed in the country, the UN appointed a Special Envoy – Mr. Staffan de Mistura – who is leading the efforts aimed at achieving peaceful settlements. However, despite the international concern and involvement, the situation on the ground remains dramatic, and immediate action is needed to prevent a further deterioration of the conditions of civilians.

With this report, GICJ wishes to highlight the urgent need for concerted action to speed up the peace process and achieving lasting peace. The violence and abuses endured by the civilian population must immediately cease, and justice and accountability for the victims must be granted. 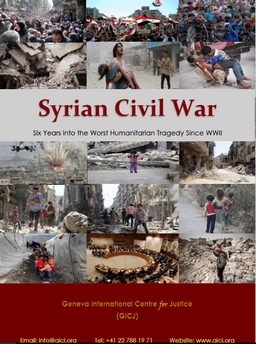