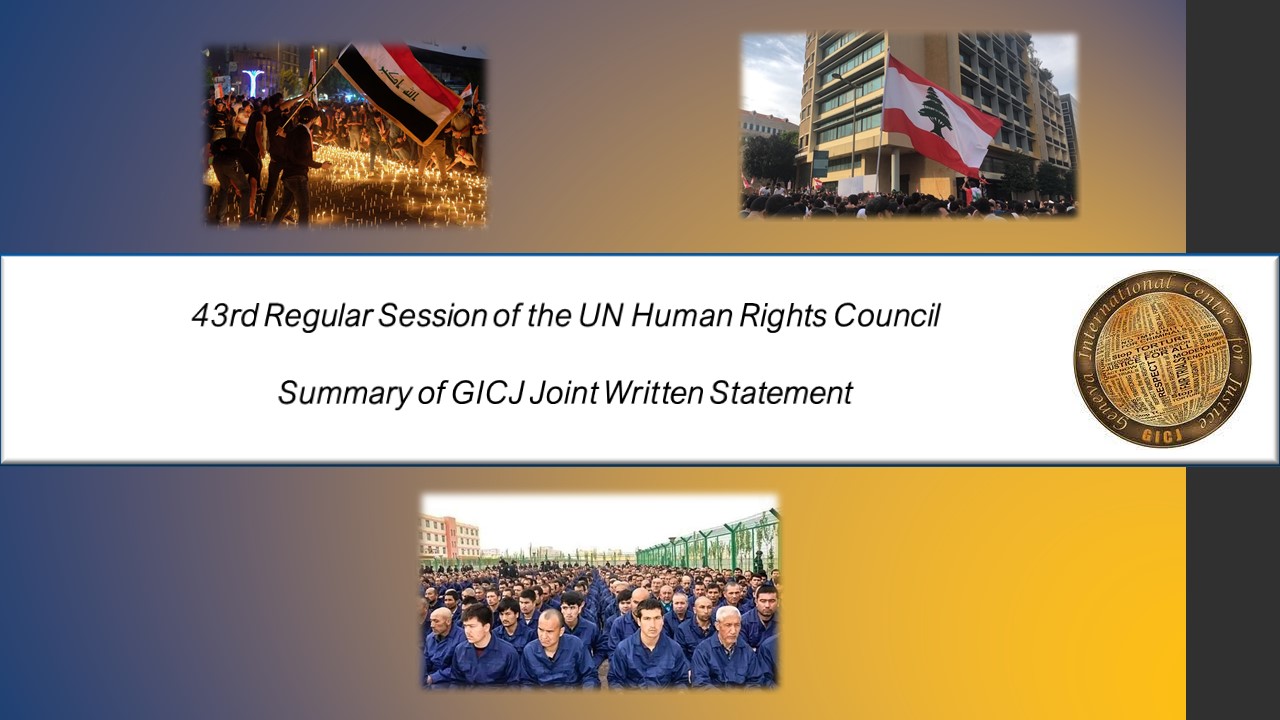 Geneva International Centre for Justice (GICJ) submitted 11 joint written statements with other NGOs prior to the 43rd Regular Session of the United Nations Human Rights Council (HRC). The statements covered several specific country situations and other human rights violations across the globe.

The plight of Human Rights Defenders and Journalists in Iraq

Throughout the anti-government demonstrations plaguing Iraq since the beginning of October 2019, threats, kidnappings, and assassinations of civil activists and media personnel have continued to make headlines. Indeed, tactics of protest suppression have stretched far beyond the indiscriminate targeting of demonstrators, with growing numbers of human rights defenders and journalists being killed under mysterious circumstances or forcibly disappeared, with their dismembered remains often being uncovered nearby. It is almost certain that such activities are being carried out either by the government’s own security personnel or by independent militias. This statement considered this practice of assassination and forced abduction of activists and human rights defenders over the course of the 2019-2020 demonstrations. Its objective was to urge the United Nations (UN) and the international community to recognise that such tactics are both longstanding and prevalent in Iraq: enforced disappearances, kidnappings and assassinations have been a systematic and strategic feature of the Iraqi system for many years. More importantly, perhaps, this statement aimed to highlight that such tactics have become an important and worrying feature of the demonstrations, and to demand that perpetrators are prosecuted, and the illegal and criminal acts are terminated as soon as possible.

The persisting situation of Enforced Disappearances in Iraq

Although Iraq has ratified the CED, entered into force on 23 December 2010, it has not yet provided any effective legislation to implement it. We cannot even find a clear definition of “disappearance” in Iraqi law. The situation in Iraq is admittedly complex and the eradication of enforced disappearances will be a long-term challenge. But such an endeavour must start with the fight against corruption and impunity that has been plaguing the country for decades. The government of Iraq must cooperate with UN Human Rights mechanisms if it ever hopes to one day finally find a permanent peace.

Since the beginning of October 2019, Iraq has been racked by protests demanding the overhaul of the corrupt, sectarian-based political establishment that has been in place since 2003. Such protests, with hotspots in the Shia-majority areas of Baghdad and the Southern cities of Basra, Najaf, and Karabala, have been met by violence. Since the very beginning of the demonstrations, protestors have been directly targeted by the government security forces and militias, whose attacks have been both indiscriminate and intentionally fatal.1 This is despite the fact that the peaceful nature of the demonstrations has been maintained from the start.2 This has been directly noted by Jeanine Hennis-Plasschaert, Special Representative of the Secretary-General in Iraq. The press and civil activists have also been targeted by assassination and abduction attempts.

This statement will cover such tactics of violence, which have undeniably constituted a grave violation of international human rights law. Its objective is to urge the United Nations (UN) and the international community to recognize the gravity of the protestors’ situation, and to encourage efforts to both prosecute perpetrators of violence and to work towards the protestors’ eventual aims.

The “Peace to Prosperity” plan and International Law

Under the pretence of a detailed economic vision for the future of Palestine, the Trump administration proposed a “solution” for the ongoing conflict between the state of Israel and the state of Palestine. The plan, called Peace to Prosperity released on January 28th, 2020, claims having peace and a better future for Palestine and its citizens at its centre, yet it violates existing international law, and restricts the human rights of the Palestinian people.

The so-called solution rather resembles a political favour meant to support the Israeli Prime Minister Netanyahu in the upcoming election, than a serious and well-intended proposal for peace and development.
The fact that Palestinian leaders were not consulted in the drafting process of the proposal reveals the true intentions behind the plan. The proposal depicts a dystopian future for the Palestinian people, and a way to further restrict the development of Palestinian economy and statehood. It aims at strengthening the position of Israel in the region.

The plan proposes a future in which Palestine acts as a sovereign state with a functioning economy, but the measures the plan recommends could not be any further from that. If the plan in its current state would be implemented, Palestine would not gain any form of state sovereignty but be economically and politically depended, or in other words, supressed, by the United States of America (US) and Israeli government.

The economy of Palestine declined considerably after the establishment of the Israeli state in 1948. The conflict between Israel and Palestine has led to fragmentation of Palestine, whereby the Palestinians are physically and politically divided. This fragmentation is above all the result of the Oslo Peace Agreement, which laid the foundations for the isolation, and Israel’s economic and political control of the Occupied Palestinian Territory (OPT).

On the one side there is the Palestinians in the Occupied Territories, who do not hold Israeli citizenship and who are not subject to Israeli law. On the other side there are Palestinians with Israeli citizenship who live inside Israel. They make up about one fifth of Israel’s population. While the conflict has separated Israeli Palestinians from other Palestinians, the Israeli government has blocked the former from its political community. The Palestinians living in Israel are considered second-class citizens. This culminated with the adoption of the Basic Law in 2018, which emphasized the Jewish nature of Israel at the expense of its democratic character, thereby reinforcing over 60 laws that discriminate against Israeli Palestinian economic, political and cultural rights.

The most striking fragmentation is in East Jerusalem. The wall dividing and separating East Jerusalem has weakened the political ties between the residents in Ramallah and the West Bank. This is also evident in the region's economy: over 5,000 small and medium-sized companies have been closed in the years following the construction of the Wall, and the share of people living in poverty has increased from about 60% to 80%.

The illegality of Israeli settlements in the Occupied Palestinian Territory

The issue of settlements has received a lot of attention throughout the years by United Nations bodies and the international community. Following the Oslo Accords, Israel enjoys joint security control over Area B of the West Bank and full control over the security, planning and construction in Area C, the latter constituting 62 per cent of the West Bank. Based on this information, Israel has control over a substantial part of the Occupied Palestinian Territory. Thus, Israel decides which laws are to be applied, and has chosen to implement military law to the Palestinian population. Israeli settlers, on the other hand, are under the criminal legal system of Israel. This practice is against international humanitarian law and human rights law.

Violations of the right to freedom of religion in China

The Uyghur population located in Xinjiang Uighur Autonomous Region, China (Xinjiang) faced and faces ongoing human rights violations carried out by the Chinese government solely based on Religious beliefs and cultural heritage. After the terror attacks of 9/11 a clear rhetorical shift is notable. While previous riots, protests and deaths were blamed on a specific Organisation, the East Turkestan Islamic Movement, China officially suggested the existence of the Uyghur to be a terrorist threat to China.1 This rhetorical shift establishes a clear link of Islam and violence, a link that violates national as well as international law. 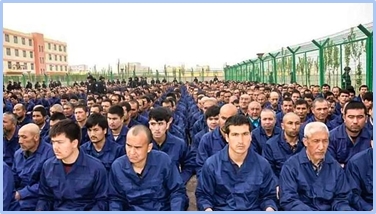 Under the pretence of combating terrorism, China actively supresses the Uyghurs right to access Islamic knowledge and education. This suppression becomes evident in a tightening of Chinese legislation over the past years. The wearing of religious symbols and engagement in religious activities has been outlawed in all educational institutions in Xinjiang. Furthermore, activities that contribute to the peaceful performance of religion were labelled as “illegal” and “extremist”. Certain ways of wearing a beard or selection of names contribute to the “spread of religious fanaticism” according to China.

It is assumed that Uyghurs and other Turkic minorities are being held in so-called counterextremism centres and/or forced in so-called “re-education camps” for political and cultural indoctrination. Interviews with victims of those detention centres claim prison like conditions as well as torture.

Lebanon is currently facing a major environmental problem regarding pollution and environmental degradation. The situation violates a number of human rights: the rights to life, to health, the rights of the child, as well as, the right to live in a healthy and sustainable environment. Lebanon’s environmental degradation and the problems associated can be traced back to what seems to be the root of all problems in Lebanon: corruption and sectarianism. Waste management is a profitable business and a big proportion of money invested to solve Lebanon’s environmental problems goes back into the pockets of politicians and their associates. Thus, the current unprecedented protests have united all different sections of the society with the aim of ending once for all the sectarian nature of Lebanese politics and widespread corruption.

Today, racism and racial discrimination is an overlooked and under-acknowledged human rights violation and threatens the lives of millions of people across the globe. Governments have failed in their decades-long commitments towards eliminating the scourge of racism and racial discrimination. Furthermore, they have also failed across the globe in taking the necessary steps and adequate measures toward properly implementing existing international laws that protect humans against racially based violence, hate crimes, institutionalised racism, and other such race-based acts and fears.

This written statement addressed current instances of racism and racial discrimination that persist in today’s society, which continues to devastate innocent individuals, families, and communities. It also addressed concerns that have allowed this scourge to perpetuate in the 21st century

Children exploitation in situations of conflict and Humanitarian

Violence against children is a major human rights problem. The impact of violation, abuse and/or neglect in childhood is detrimental to physical, psychological and reproductive health throughout the life-course, yet the high costs to society are avoidable. There are clear risk factors for violence at the level of the individual, family, community and society. According to the World Health Organization (WHO), each year, at least 55 million children in Europe suffer some form of physical, sexual, emotional or psychological violence and these abuses have been widely unreported.

Whether it is during natural disasters, armed conflict or protracted humanitarian situations, crises are accompanied by inequalities and impoverishment impacting on child development. Existing vulnerabilities, from gender-based violence to discrimination and lack of economic opportunities are exacerbated during such crises.

Regrettably, these contexts result in children risking being exposed to sale, trafficking and other forms of exploitation, whether in their homes, communities or in places where migrants or refugees reside, including reception centres or refugee camps in source, transit and destination countries. Girls become victims of sexual exploitation, including sexual slavery, forced marriage, forced pregnancy and prostitution.

This statement specifically raised concerns about violence against children and its forms in the scenarios of conflicts and humanitarian crises where children are the victims, and offered a further analysis on the grievous situation in post-invasion Iraqi.