Interactive Dialogue with the Special Rapporteur on trafficking

On June 29 2021, the Special Rapporteur on trafficking in persons, especially women and children Ms. Siobhán Mullally, had the occasion to present her report for the 47th regular session of the Human Rights Council. She focused her report on the non-punishment principle.

Trafficking in persons remains a serious challenge in our societies, especially for the most vulnerable groups of people such as women and children. In her report, the SR emphasized on the legal issues that surrounded the prosecution of perpetrators. Indeed, victims of trafficking are too often punished for illegal acts committed when being trafficked. Moreover, the risk of being punished for these acts increases the fear of victims and prevents them from seeking legal support. In this context, it is essential for states to implement the non-punishment principle as it can avoid victims to be targeted instead of perpetrators. Still, according to Ms. Mullally, the implementation of this principle remains very limited and in most countries victims remain at risk of being involved in unfair trials and eventually punished. Punishments may take many forms, plus they can have a lifelong impact on victims.

Participating countries overall demonstrated their strong support of the non-punishment principle. States such as Egypt, Liechtenstein and the United Arab Emirates notably mentioned specific conventions and initiatives implemented on a national scale to prevent human trafficking.
In her concluding statement, Ms Mullally underscored how introducing a non-punishment law into national policies and laws allowed to ease access to support for victims and to ensure that perpetrators are punished. She also highlighted the impact the Covid-19 pandemic had on human trafficking : in the context of an economic crisis, more vulnerable groups such as women and children are more likely to be victims of trafficking. Given the current global crisis, it is vital that states implement all required efforts in order to stop human trafficking and especially implement the non-punishment principle for victims of trafficking.

Opening remarks by the Special Rapporteur

The Special rapporteur on trafficking in persons, especially women and children, Ms. Siobhán Mullally thanked the president and the delegates for the opportunity of presenting her report on the implementation of the non-punishment principle. She highlighted that she benefited from submissions by state and non-state actors from all regions. In the beginning of her presentation, she reiterated that rights to assistance and effective remedies of the victims must be recognized. According to her, the non-punishment principle is at the center if these rights, which means that victims of trafficking must not be punished for illegal acts committed when being trafficked. In fact, the perspective of potential punishment would only increase the overall fear of victims and prevent them from seeking protection. This critically undermines the fight of impunity because punishment rather targets the victim than the perpetrator. The SR made clear that the failure to respect the non-punishment principle is linked to serious human rights violation such as unfair trials. 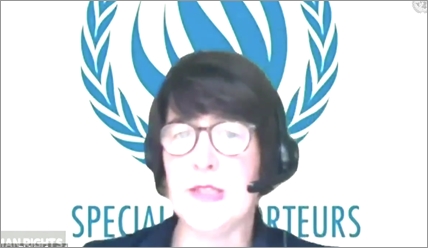 Siobhán Mullally, the Special Rapporteur on trafficking in persons, especially women and children.

Unfortunately, the implementation of the principle remains limited. Furthermore, punishment of victims hinders their recovery. Those who are at risk of punishment are also at heightened risk of re-trafficking. She called on states to facilitate the victim’s access to justice. Moreover, the SR witnessed structural racial discrimination in the justice system. She emphasized that the principles of international law against all forms of discrimination are in particular important for the implementation of the non-punishment principle. The fact that foreign nationals are over proportionally represented in national crime systems indicates that victims of trafficking are also victims of punishment. Especially, women are at risk of the consequences of trafficking. The SR is concerned by the finding that the disabilities of victims are often ignored. Instead, states must ensure equal protection and equality before the law for everybody. It is their obligation to guarantee non-discrimination, such as adequate accommodation for victims with disabilities.

Overall, she stressed many times that states have to be aware of the fact that punishment may take many forms and that it can have a lifelong impact. One form of punishment may also be the exclusion of asylum, which is a human right itself. For all these reasons, states must ensure full implementation of the non-punishment principle. This means the relief of any sanctions imposed, and the provision of legal aid to enable full recovery of the victims. Punishment in the way of deprivation of nationality leads to statelessness, which is directly linked to a heightened risk of trafficking.

Particularly, she highlighted that the international community must ensure that children being victims of trafficking are not double victimized, but primarily treated as victims. States must prioritize their reintegration. Also, child victims should not be punished in order to break the cycle of trafficking, especially child trafficking. Instead, family reunification must be prioritized. Following that, she pointed to the decisions by the European Court for Human Rights, which found that prosecution of victims of trafficking constitutes a danger for their social and psychological recovery. Furthermore, they should have the right to a fair trial. Ensuring that is a positive obligation of the state. In fact, this obligation even heightens when the victim is a child. Finally, the SR closes her presentation by thanking everybody for their attention and looking forward to a fruitful dialogue.

Australia (on behalf of a group of countries) : The representative of Australia highlighted how the increased use of technology was further enabling exploitation, as it prevents victims from seeking support services. Australia also asked the SR to know more about the ways in which states could work with civil society and businesses in order to prevent trafficking.

European Union : the EU representative mentioned the EU’s 2021 strategy to counter trafficking. He notably pointed out how bringing perpetrators to justice while protecting victims represented a core part of this strategy. The representative also mentioned how gender inequality victimized women and children, and asked the SR how the digital environment could promote education and access to information  in order to prevent the trafficking of women and children. 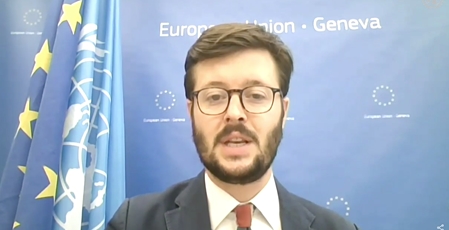 Rocco Polin, the representative of the EU.

Egypt (on behalf of the group of Arab states) : The representative expressed his concern about trafficking being observed in Arab states. He stressed that the Covid-19 pandemic had exacerbated these crimes, which particularly affect women and children. Lastly, he mentioned the efforts demonstrated by Arab states in order to counter trafficking, especially the Arab convention, established in order to combat these crimes and bring their perpetrators to justice.

Sweden (on behalf of the group of Nordic and Baltic countries) : The representative stressed how situations of conflict or of humanitarian urgency exacerbated the risks of trafficking being perpetrated. She also mentioned the importance of the non-punishment principle in combating trafficking : we must increase the efforts demonstrated in protecting victims’ rights and preventing traffickers from evading criminal liability. Lastly, the representative asked the SR what needed to be done in order to firmly establish the non-punishment principle while bringing perpetrators to justice. 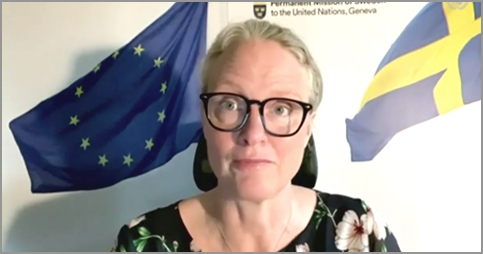 Anna Jardfelt, the representative of Sweden

Sierra Leone: The representative stated Sierra Leone aligned with the African group’s statement, while stressing the critical importance of the non-punishment principle : victims must not be stigmatized or punished, and corrupt officials who facilitate trafficking must be prosecuted.

United Arab Emirates: The representative reiterated the UAE’s efforts to prevent trafficking. He stated that the national strategy aimed to guarantee justice for victims by implementing the principle of non-prosecution and to improve international coordination on the matter. He also stated that measures such as the building of shelters had been established by UAE in order to assist victims of trafficking.

Mohammed Alshamsi, the representative of the UAE

In conclusion, trafficked persons are victims, especially women and children. State parties should take all necessary measures in order to grant a full application of the Non-punishment principle, beside the early identification, protection of victims and setting a recovery plan to victims based on non-discriminatory behaviour (religion, ethnic, gender, disabilities). Punishment can take many forms including, detention, arbitrary arrest, deprivation of nationality or excluding of refuges.

Considering that states should not punish the victims of trafficking for their illegal entrance of residency in a state is essential as a first step to help victims of trafficking. The incorporation of the Non-punishment law into national policies and laws will facilitate the overall process for governments in order to conclude a full process with victims, and enable victims lodging complaints against perpetrators, and ensure about the remedies provided by states. Frontline workers are key element in this process, therefore, providing training for those who are in direct contact with victims of human trafficking such as police boarders is very crucial.

The impact of the Covid-19 pandemic has showed a high rise in human trafficking, vulnerable group like women and children are more likely to be trafficked and re-trafficked specially with economic crises occurred and the lack of job opportunities available. The impact of the Covid-19 pandemic for victims of human trafficking is actually severe and has long term effects, especially for those who might be re-trafficked. Concerning online trafficking, states should take preventing measures in this regard, and use the digital environment in order to raise awareness about trafficking and help victims. Joint cooperation between states, institutions and online business holders will affect the risk of human trafficking in the digital environment during the corona pandemic.

GICJ is extremely concerned by the observations put forward by the SR: it is particularly concerning to hear that the increasing use of technology rather encourages perpetrators than it helps victims of human trafficking.

We firstly urge all member states to ensure that the non-punishment principle is implemented without any conditions for victims of trafficking. Secondly, we call on states to improve mechanisms aimed at identifying victims and providing them with immediate support. Lastly, we call on states to establish concrete measures in order to help victims reintegrate into society and provide them with long term support, especially on the economic and mental terms.