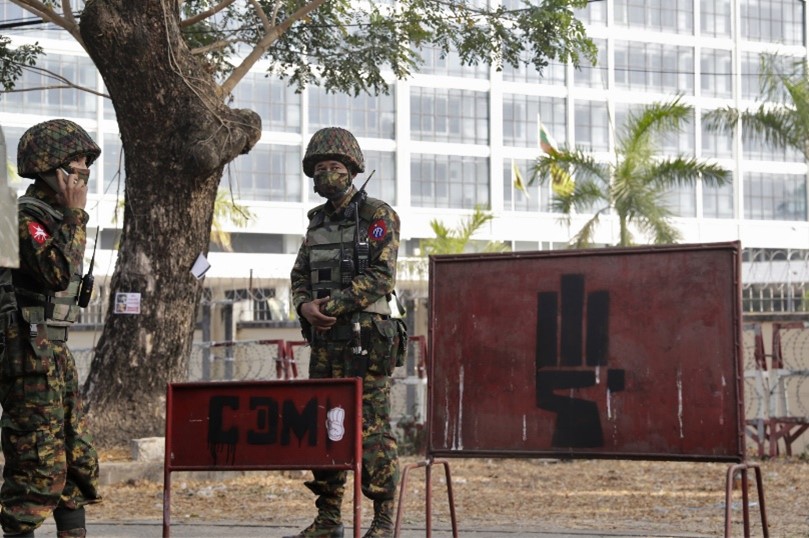 As protests and resistance to the military regime continues, government violence intensifies in Myanmar­. Over the last week, the military seems to have resorted to burning villages to death.

Since the civilian-elected government was overthrown by the military in last February, human rights violations are multiplying. Protestors have been opposing the regime, slowly organizing resistance. A militia reportedly ambushed a unit of the Myanmar military on December 7th with an explosive device. The security forces retaliated with the arrest of six men and five boys aged 14-18, in a raid of their village of Done Taw. Eleven bodies were later fund burnt to death.

This is not the first incident of this kind. Along with other forms of violence targeting civilians, the security forces have rammed vehicles onto protesters and firing live ammunition. The torching of villages is particularly recurrent: in Chin state and Kayah state, sources report over ten different incidents involving the torching of shelters, places of worship and individual residences. The OHCHR said in a press release that the security forces of General Min Aung Hlaing have disrespected their international legal obligations to the civilian population of Myanmar. Currently, at least 10 600 people are detained arbitrarily, and over a 1300 have died due to the regime’s violent policies.

As a result, the people of Myanmar observed a nationwide silent strike on the 10th of December, to protest the grave violations of fundamental rights performed by the government. Around 8000 police officers and soldiers have even joined the protests, forming an anti-junta force to oppose the government. In  the state of Kalay, they have formed the “Kalay Police Service” as a parallel institution of law enforcement which already controls over 50% of the area.

The organization of anti-junta armed groups could lead to a nationwide civil war. Fighting is already intense between militias and the military in the Kalay state. Geneva International Centre for Justice (GICJ) urges the international community to help the people of Myanmmar to restore civilian rule and halt all human right violations. Under such circumstances, the people are left with no choice but resistance. GICJ urges the UN and the international community to effectively pressure Myanmar to end military rule and abide by international law.