Bombing Iraqis is Not the Answer

To justify the war against Iraq, the US and UK promoted a media campaign to create the perception that Iraq had Weapons of Mass Destruction (WMD) which posed a tangible threat to its neighbours and the West. Although the perception was based on disinformation, it became a reality with public opinions, and had well documented devastating consequences on both Iraq and the Iraqi people. 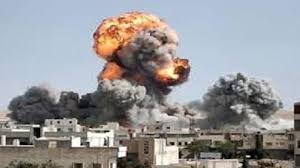 The demonization of Saddam Hussein eclipsed the moral conscience of the International Community and this directly paved the way for the invasion and destruction of Iraq. Hundreds of thousands of Iraqi civilians were perished and displaced.

Unfortunately, to date the US Administration continues to bury its head in the sand, pretending that Iraq post Saddam Hussein is a functioning democracy, threatened by the ISIS religious extremists. This perception is also wrong, and if pursued would have devastating consequences on Iraq and the welfare of the Iraqi people. For the record, Iraq is a failed state run by the Iranian created, funded and controlled Dawa Party. Theocratic Iran continues its religious regional ambition started by the Islamic Revolution of Ayatollah Khomeini. The Iraqi regime is one of the most corrupt in the world, and its record on human rights is second to only that of the Tehran Government. It is not qualified in protecting Iraq’s national interest or security.

Therefore the sensible way forward to address the problems in Iraq is not more bombings; such actions will certainly prove counterproductive on many levels. It will force ordinary Iraqi citizens to seek refuge and offer protection to ISIS as their champion. Witnessing Iraqi civilians being bombed and killed on a daily basis will give coherence to the ever present danger of radicalising waves of young generation, being hounded by relentless demonisation of the Islamic faith and associating the faith with terrorism by far right groups. It will not degrade the capability of ISIS as such groups will, whenever threatened, melt with the population simply by taking off their black hoods and therefore cease to be a target for the bombers. Inviting Arab governments to participate in this bombing campaign of Iraq is a strategic error of political judgement. It will incite the citizens of these countries to destabilise their governments, who have not been forgiven for joining the US first campaign of invading Iraq. It will also provide a cause for ISIS to export with vengeance its campaign of terror to these countries.

Iraq needs an Independent Sovereign Secular State, where there is no room for religious or political extremists. An inclusive Government of National Unity that represents Iraqis from all walks of life and is capable of defending the interest of the people and the territorial integrity of Iraq.

For this to happen, the US and UK need to open dialogue with Iraqi opposition groups. These include Political Parties, Tribal Leaders and Military Councils which represent members of the former national Iraqi army uprooted by Viceroy Paul Bremer for allegedly belonging to the Baathist Party.

The purpose of the dialogue is to put an end to Iranian militias roaming the streets of Iraq.  Transition of power must be without Iranian interference. Over the past few years, Iranian militias massacred and crushed peaceful demonstrations by Iraqis opposing the brutal sectarian regime of Nouri Al- Maliki but were unfortunately totally ignored by the outside world.

Iran should be persuaded to stop interfering in Iraq’s affairs in return for better terms from the West on the current issues of sanctions, nuclear file, security of the gulf and oil policies. The former prime minister of Iraq, Nouri Al-Maliki, could not have maintained power without the support of Iran’s Shi’a militia.

During the 80s, the US and its allies helped create Al Qaeda to fight a holy war against the presence of the Soviet Union in Afghanistan. When outlived their usefulness, Al Qaeda was abandoned by the US and accused of being a terrorist organisation. It was an ingredient of terrible, yet powerful US propaganda that cited a non-existent Al Qaeda presence in Iraq as one of the causes for the invasion of Iraq.

Having been placed in charge of the US’s “surge” forces in Iraq in 2007, General Petraeus helped create “Al Sahwa” (the awakening), a group of US-funded Sunni fighters and tribal leaders charged with fighting Al Qaeda in the country. Those Al Sahwa members who were not killed by Al Qaeda were however abandoned by the US and felt increasingly alienated and suffered by Maliki’s government and its Shia militias.
Members of the National Council for the Awakening were handed over in 2013 by the U.S departing army to the Maliki regime, with the promise that their salaries would continue to be paid and that they would be integrated in Iraq’s army and security services. Maliki negated on these promises and the Sahwa were virtually non-existent. Sunnis formerly serving with the group either became unemployed or joined the Islamic state of Iraq and Syria.

Having supported ISIS to overthrow the regime of Bashar al-Assad in Syria, but failed in its objective.  ISIS was left to its own devices, and was able to exploit the political vacuum created by an Iraqi regime imposed on Iraq by a US Sectarian constitution.
The current debacle of ISIS in Iraq and Syria, is the result of US policy. The US allies, in particular the UK, should be sceptical and not shy away from being seen to be critical of the US failed policies in Iraq. It is the only way for lessons to be learned, that by practising the politics of ignorance, the lives of ordinary human beings are destroyed.