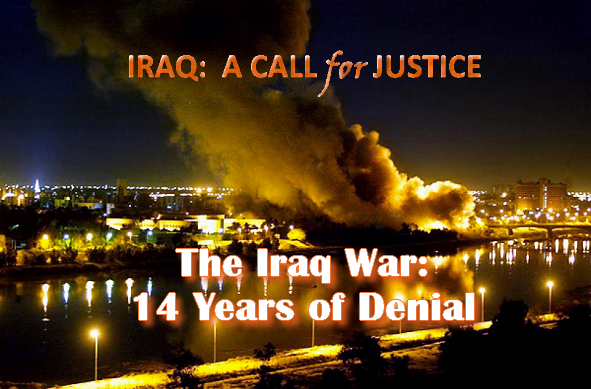 On 20 March 2017, 14 years will have passed since the illegal invasion of Iraq in 2003. Yet, as the eyes of the world’s media have shifted elsewhere, it’s easy for some to forget that today, Iraq is in ruins. 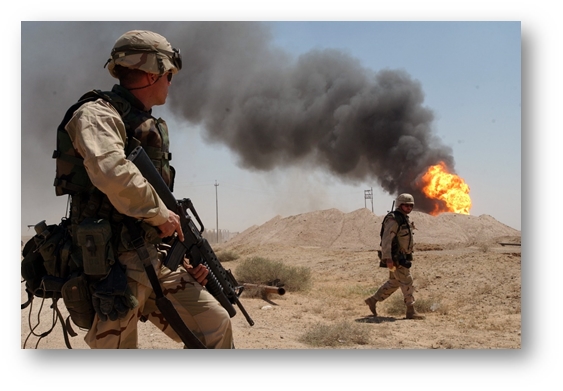 This situation is the culmination of two events: the UN sanctions imposed on Iraq in 1990, and the invasion and subsequent occupation in 2003. These two events brought this country to its knees, while millions of Iraqis had to suffer the indignity of watching. Now their country, their home, has changed unimaginably - into the state of chaos we see it in today. For those who remember Iraq as it was, or for those who will now never know, GICJ has documented and investigated these events and continuously reports to the relevant UN bodies and international community - with the ultimate goal of achieving accountability and justice, with the hope of restoring, one day, some of the dignity these events took away.

In 1990, the UN Security Council imposed a near-total financial and trade embargo on the Republic of Iraq. They began 6 August 1990, four days after the invasion of Kuwait, and although Iraq had retreated by February 1991, the sanctions stayed largely in force until May 2003 - and remain in part today, including continued reparations to Kuwait.

Throughout this period, the Security Council, led by the US and the UK, rejected Iraqi appeal, after appeal, to lift the restrictions. They were the toughest and most comprehensive sanctions in history; considered by many to be in clear violation of international law. While economic sanctions, by their very nature, are designed to inflict economic hardship on civilians, their result was a dramatic fall in living standards, the collapse of infrastructure, and a serious decline in the availability of public services.

In 1993, the UN Food and Agriculture Organisation (FAO) warned that the economic sanctions risked widespread starvation in Iraq. In 1995, this situation was confirmed by the FAO, who found over half a million Iraqi children might have died as a result of the economic sanctions imposed, with the mortality rate for children under five having increased fivefold since 1990. Leading to a conclusion from the FAO report that the sanctions challenged “the moral, financial and political standing of the international community.”

The sanctions showed how innocent civilians were used as pawns by the West - with the deaths of 1.5 million Iraqis they caused not just overlooked, but openly accepted. When the former US Secretary of State Madeline Allbright was asked whether she thought the deaths of half a million children were worth it, she “...we think the price is worth it.” Yet this statement begs the question, of what exactly these deaths were worth - were they worth the total obliteration of a once modern and proud country?

With Iraq crippled by the sanctions, it proved an easy target for the US and the UK to lead an unprovoked and illegal invasion on the 20 March 2003. Yet it is sad to say that almost 14 years later, the war-mongering elites responsible can be almost certain they will enjoy immunity - with even an apology seeming like a distant hope.

The Iraq War was more than a mistake, it was based on lies and false . In the lead-up to the invasion, the US and the UK attempted to gain popular support for a war on Iraq by falsely claiming that Saddam Hussein was developing weapons of mass destruction. Throughout 2001 to early 2003, the Bush Administration built on this case to publicly justify their illegal invasion of Iraq, culminating in a speech by of State, Colin Powell, to the UN Security Council on 5 February 2003, in which he asserted that "there can be no doubt that Saddam Hussein has biological weapons and the capability to rapidly produce more, many more" and that there was “no doubt in my mind” that Saddam was working on producing nuclear weapons. 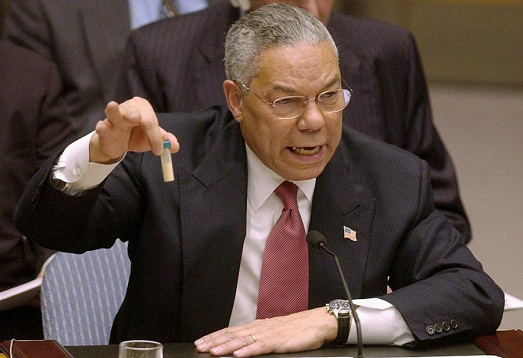 US Secretary Colin Powell addresses the UN Security Council, 2003:
“There can be no doubt that Saddam Hussein has biological And he has the ability to dispense these lethal poisons and diseases in ways that can cause massive death and destruction.”

However, following the invasion of Iraq, no weapons of mass destruction were found - and the rationale used to justify the invasion was found to be unequivocally false. Further to this, as the US and the UK failed to secure the necessary UN support for their invasion of Iraq, they began it without a Security Council Resolution. This meant that not only was the war waged on a falsified pretext, but it also broke the UN and a gross violation of international law.

This dark milestone in the history of Iraq began with a US operation entitled “Shock and Awe”, which involved an overwhelming number of devastating airstrikes on Baghdad, that were allegedly intended to destroy the Iraqi command structure and paralyse the country’s will to fight back. It took just 6 weeks for US President George W. Bush to give his Mission Accomplished speech. Yet in 2017, it’s clear that far from being the “victory” the Coalition announced, the invasion and subsequent occupation destroyed Iraq, with ISIS being just the most recent materialisation of instability which will haunt generations of Iraqis to come.

As if the deaths and displacement were not enough, the invasion and occupation absolutely destroyed what was once a developed country. The relentless bombing decimated thousands of private and public buildings, including civilian homes, hospitals, schools, shops and businesses, as well as bringing all the main infrastructure to the ground. The consequences of has been the unavoidable deterioration of the public sector, particularly the education and healthcare spheres. This has seen the re-emergence of malnutrition and diseases on a large scale, meaning the development of children both physically and educationally will continue to be stunted for decades to come.

Yet perhaps worse still, the action taken by the Coalition to dissolve state institutions, including the army and security forces, has meant sectarianism and ethnic tension become rife in Iraqi society. The new security force the Coalition established incorporated a large proportion of religious Shi’a militia fighters - who have now become intrinsic to the Iraqi security forces. This has resulted in the persecution of certain sects of the community, who face arbitrary arrests, torture and executions on a sectarian basis, that has now become both systemic and increasingly frequent.

The UN Security Council is at the top of the institutional architecture designed to maintain international peace and security. However, the sanctions it imposed were a punitive measure, and rather than being intended to achieve the disarmament aims of Resolution 687 - the sanctions were a clear abuse of the Security Council’s power. The deaths they caused, and the revelations of corruption and mismanagement regarding their Iraq Oil-for-Food (OFF) Program, as well as over Iraq policy in March 2003, has put a negative smear on the Security Council’s reputation.

The subsequent invasion of Iraq, a sovereign, founding member of the UN, by a US-led Coalition was one of aggression, and without justification. According to the Tribunal of Nuremberg, this is not only an international crime - it is a supreme international crime which contains within itself the accumulated evil of the whole. Not only was the invasion unauthorised, but the occupation violated international law in a number of ways - including the systematic torture and ill-treatment of Iraqi people. Yet the UN failed to take the required action at the time according to its own Charter. Acting only as a silent witness, it also failed to acknowledge the gravity and the consequences of these crimes of aggression - and even today, the UN has still not held those responsible , leaving the Iraqi people to suffer for all these years.

In 2017, looking at the state of Iraq, it seems impossible to imagine how the lesions of individual and collective trauma may be sutured.

Yet it is clear that “truth telling” and bringing those responsible criminal justice, alone, will not be sufficient to remedy the Iraqi people. The first steps to make reparations should firstly, be the investigation and prosecution of all the abuses committed during the war and invasion. All countries, including the US, should ratify the statute of the International Criminal Court, and serious cases must be referred to the Court, for independent investigation and prosecution.

Secondly, those responsible for the invasion must be held accountable for all of the consequences that derived from their actions. A United Nations compensation commission for the Iraqi victims should, therefore, be established. Compensation should include rebuilding the Iraqi government institutions, the infrastructure system, schools, hospitals, private properties and everything that was been damaged during the war and occupation. This should include an environmental clean-up, undertaken and financed by the Coalition forces who are responsible for the use of depleted uranium and other toxic agents, which has resulted in a worrying increase of cancer and birth defects in Iraqi civilians. It should also include the provision of financial and political support to refugees who fled Iraq, and those who have been internally displaced.

Tony Blair and George Bush, the two leaders responsible for the “I will be with you, whatever” Iraq War, have apologised to their own people. Yet the Iraqi people - who should be the true recipients of such an apology - have received no such consideration or thought. This means that in 2017, 14 years on, when an apology seems increasingly unlikely, and Iraq is drifting out of the memory of many, it becomes even more important to obtain justice. The US and the UK left behind a and tortured Iraq. What they have failed to leave behind was any reparations or compensation for their actions, which must only be the start of the enormous debt owed to the Iraqi people - for whom life will never be the same again.

Achieving justice is one of the main goals of GICJ, enshrined in its founding Charter. Since its creation, GICJ has observed and documented human rights violations and sought justice for their victims through all legal means available. When it comes to Iraq, GICJ will continue to campaign for justice until this objective is achieved.

General debate on Item 3 - Promotion and protection of all human rights, civil, political, economic, social and cultural rights, including the right to development.

Alice Wickens from GICJ spoke to the Council on 10 March 2017 in a joint statement with EAFORD, International-Lawyers.org, and GICJ, saying that 14 years ago, the illegal invasion and destruction of Iraq by the United States and its allies resulted in over a million Iraqis dead and countless others without basic needs. She asked the Council to break its silence and insisted that it must take action on accountability.

Ms. Giulia Squadrin from GICJ spoke to the Council on 15 March 2017 in a joint statement with International-Lawyers.org and GICJ on the unlawful US invasion in Iraq. She emphasised that accountability and reparations are crucial, furthermore, that the international community the emergence of brutal Iraqi militias facilitated by US actions.

At the Council, on 15 March 2017, Ms Alice Wickens from GICJ highlighted, in a joint statement with EAFORD and GICJ, that the illegal Iraq war was waged on a false pretext, on one of the founding members of the UN devastating Iraq and shattering its society. She emphasised that Iraqi people deserve , justice, and reparations and demanded the Council to take immediate action.