On 8th March 2022, in the 49th session of Human Rights Council (HRC), Ms Michelle Bachelet (UN High Commissioner for Human Rights) expressed her concerns regarding the persistent impunity for human rights violations and its contribution to undermine human rights in Iran, as well as mentioned two of 2021’s use of force by Iranian authorities against protesters in both Khuzestan and Esfahan provinces. Since the very beginning of the Islamic Republic of Iran in 1979, violations against human rights have continuously taken place. Over the last three years, the economic crisis led to hundreds of strikes and demonstrations, resulting in a shortage of school teachers, retirees, and company workers. The government responded to the actions by using massive power to curb the protest.

Human Rights Restrictions
On 1st March 2022, UN Special Rapporteurs urged the Iranian Government to reconsider the new law on restrictive internet bills[1]. According to experts, the Iranian Parliament is considering a new law known as the “User Protection Bill” to give more control to the Government and army over Iran’s connection to the global internet and will require people to use IDs to access the internet.

UN experts expressed their concerns on the bill and emphasized that the country's laws are already restrictive towards many fundamental rights. The new law could not only limit access to information but will also impede business operations, information technology, science, education, and medicine. Experts went on to say that "It also interferes with the right of individuals to participate in cultural life and have access to cultural resources". Although experts have shared their concerns with the new bill with the Iranian government, the latter has not yet responded to these remarks.

Economic crisis
The country has been facing a severe economic crisis for years, which was exacerbated by US sanctions, leading to the decline of currency exchange rates and increased inflation. Between April and November 2021, the World Bank estimated the inflation rate in Iran at 43 per cent [2].

The increase in prices and the difficult economic conditions impact the daily life of Irani people, amid protests and strikes are continuously calling for change and reform. In the near past, Iran witnessed a series of protests by various professional sectors, demonstrating against dire living conditions.

Ongoing Demonstrations
On 19 February 2022, thousands of teachers participated in demonstrations in more than 100 Iranian cities, protesting against the slackening implementation of reform on wage and pension[3]. In the cities of Isfahan, Shiraz and Mashhad, thousands of school teachers gathered in front of headquarter of Parliament in Tehran and offices of the Ministry of Education. The protesting teachers demanded the release of 15 colleagues who were arrested in previous protests on Saturday. 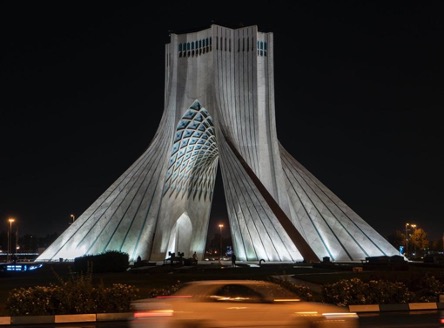 On 13 February 2022, a large number of retirees in Iran demonstrated across the country against their poor living conditions. They gathered in Tehran and other cities such as Rasht, Khorramabad, Isfahan, Mashhad, Shiraz, and Ahwaz. With the spread of protests of professional unions, the security and judicial system run intensified campaigns against teachers, workers, retirees, and union activists. According to reports, teachers in Iranian cities have committed suicide due to extreme poverty.

On 10 February 2022, the date of the 43rd anniversary of the anti-Shah revolution, Irani youth gathered in a number of Iranian cities to call for an end to repression from the current regime. Young people burned the entrances of detention centres (in which torture is practised), large banners with pictures of Ali Khamenei (Supreme Leader of Iran) and Qasem Soleimani (military officer in Islamic Revolutionary Guard Corps, died in 2020). Among these centres was the Public Prosecutor's Office in Tehran, where most of the arrest, torture, and death sentences are decided upon.

The nationwide strike by Iranian teachers, which started against deplorable living conditions on 2 December 2021, resulted in repeated protests on the 11, 12, 13, 23 and 28 of December[4]. Currently, the salary of teachers with academic achievements, such as a doctorate degree, is about 4.5 million rials (about $160) per month.

The protests continued on 29, 30 and 31 January 2022, where thousands demonstrated against the dawdling implementation of wage and pension reforms. The protesters demanded the adjustment of teacher salaries with those of other areas of the public sector, and the immediate release of their colleagues arrested in previous protests.

On the third day, the participants announced a final statement of their protest, asking parliament that their work should be in favour of people, not the government, criticizing the government for its "deflationary, anti-people and anti-teacher budget", and criticizing the imprisonment of activists.

Previous demonstrations
It is noteworthy to mention one of the massive demonstrations against the Iranian government in November 2019, where protests started as a response to increasing gasoline prices but soon turned into demands for the total removal of the ruling system in Iran. The movement included the poorest class of society. Iranian previous Interior Minister Abdolreza Rahmani-Fazli admitted for the first time in May 2020, that 225 people had been killed in the 2019 demonstration, while the opposition asserts that the death was in thousands [5].

The Iranian authorities responded to the 2019 protests with severe repression, and a near-total blocking of the Internet in the country. The government’s actions were more violent than any previous movement. Previous Iranian Interior Minister Rahmani-Fazli said, "We have blocked the internet for the benefit of the Iranian people." News and information were subject to manipulation to suit the government's vision because all media perspectives from newspaper, TV, radio and news agencies are under the government's control. Despite the UN's call for the authorities to not use live ammunition against protesters, videos on social platforms prove the opposite. The actions of the Iranian government did not result in victims. As of today, the fate of thousands of protestors who have been arrested is still unknown.

According to Amnesty International, the highest number of protesters killed in the 2019 demonstrations were in poor neighbourhoods on the outskirts of Tehran, Ahwaz and Kermanshah, losing 167, 57 and 30 demonstrators respectively [6].

Also, 2021 saw an incredible amount of protests in the entire country. Again, many of them were strikes and protests of workers, protests for terrible living conditions and social injustices.

On 23 February 2021, protests and strikes started across Sistan and Baluchestan provinces after Iranian Revolutionary Guards fired at a number of fuel tankers killed ten and wounded five others [7]. Among the others, Iran witnessed at least 271 protests during February 2021, and 99 protests during January 2021 organised by pensioners in 30 cities.

In addition, several sectors in Iran witnessed protests, such as oil, electricity, railway sectors, and the health sector. On 20 June 2021, thousands of employees of oil, gas, and petrochemical industries began strikes and continued for days. Workers from more than 60 companies in  Ahwaz, Bushehr, Hormozgan, Tehran, Isfahan, Azerbaijan, Kerman, and Ilam participated in strikes, demanding a pay raise, back pay, and workplace security [8].

On 15 July 2021, three demonstrators were killed, according to Islamic Republic News Agency in demonstrations in Khuzestan province due to lack of water access. According to Human Rights Watch, Iranian authorities have used excessive force against demonstrators in Khuzestan province [9]. With any kind of criticism from civilians, the authorities responded with excessive force and arrested hundreds of demonstrators, human rights in general, especially rights of assembly going from bad to worse in Iran.

Geneva International Centre for Justice (GICJ) calls the international community to pay more attention to human rights violations that have been applied by the Iranian regime against civilians, and ask for justice for victims of rights of assembly. GICJ is against all sanctions targeting ordinary people and call for urgent solutions for social injustice of employees, workers, and retirees payments in Iran. GICJ shares the Special Rapporteur’s concerns regarding the increasing control of the Iranian government by laws that have a direct effect on human rights. The new bill brings the risk of seriously limiting the inalienable rights of Iranian citizens, such as access to information by limiting access to the internet.