On March 2nd, the UN General Assembly voted in favour of a Resolution, demanding Russia to “immediately, completely and unconditionally withdraw all of its military forces from the territory of Ukraine within its internationally recognized borders.” ‘’The message of the General Assembly is loud and clear: end hostilities in Ukraine”, said Secretary-General António Guterres after the meeting.

The resolution comes after a previous UNSC meeting on the 25th of February, in which Russia vetoed a resolution that would force its troops to withdraw from Ukraine. Two days later, on the 27th of February, President Putin ordered the deterrence forces to get into special combat duty mode, implicating the highest defence readiness conditions for Russia and threatening to resort to nuclear weapons.

Background
Shortly after the recognition of the Donetsk People’s Republic and the Luhansk People’s Republic, the Russian President ordered a “Special Operation” in the territory of Ukraine on the 24th of February. Minutes following his announcement, the Russian military launched a massive invasion of the North, West, and East of Ukraine. Ukrainian journalists reported explosions in Kyiv, Kharkiv, Odesa, Kramatorsk. Due to the failure of Ukrainian air defence and the attacks on cities, inhabitants were forced to hide in anti-missile bunkers and subways. 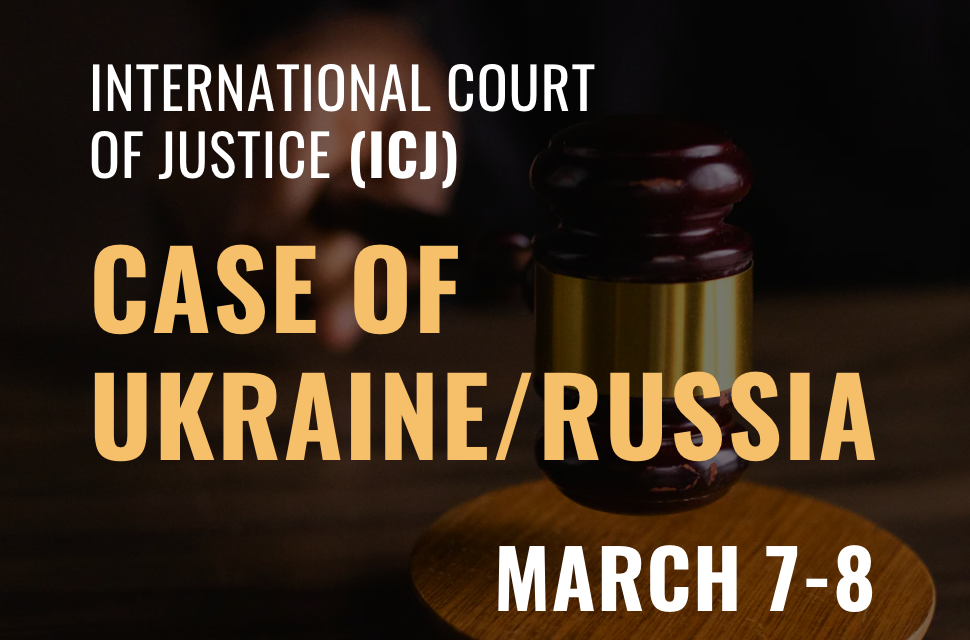 Russia’s Ministry of Defence reported strikes specifically targeting Ukrainian military bases. Nonetheless,  some strikes were carried out on civilian buildings, which is a clear violation of the laws of war. Since the beginning of the conflict, 752 civilians have been killed due to shelling, including several children. People were forced to flee to the West of the country. Romania, Moldova and Poland offered to provide asylum to refugees. Today, most men between the age of 18 to 60 have been mobilised to join the Ukrainian forces, preventing them from leaving the country.

At the UN Security Council 8983rd meeting on the 28th of February, High Commissioner for Refugees, Filippo Grandi informed that there are currently 520,000 refugees from Ukraine in neighbouring countries. According to UNHCR, as of March 2nd, the number of refugees amounted to more than 1 million people. Cities like Cherginov and Kyiv were totally or partially blocked by the Russian army.

Russia and Ukraine’s respective positions
According to the Russian position, the Ukrainian Government is violating the basic human rights principles of the Russian-speaking part of the population. Moscow claims that Kyiv has been killing the citizens of Donetsk and Luhansk for eight years and that Russia must protect the freedom of Russian-speaking people. That is to say, the aforementioned accusations against the Ukrainian Government have not been confirmed by independent mass media, and the  European Commission dismissed the allegation as "Russian disinformation". In addition, President Putin has expressed his concern about the expansion of NATO and said the positioning of missiles in Ukraine to be unacceptable.

On the other hand, Ukraine proclaims the territory of Donbas as temporarily occupied by Russian forces. According to the Ukrainian position, Crimea and Donbas are integral parts of the state. Therefore, the main goal of Ukraine is to stop the military invasion and preserve its territorial integrity.

Response from the International Community
Civil society organisations around the globe condemned the Russian intervention in Ukraine and Belarus's support of Russia. UN Human Rights experts called on the Russian Federation to immediately end its aggression against Ukraine and call off its unnecessary and unprovoked military attacks. On the initiative of the U.S, economic sanctions were imposed on Russia. The sanctions were supported by the E.U, Australia, Canada, Japan, other countries and other entities such as the World Bank. Many countries cancelled all aircraft services, closed their airspace and annulled the country's participation in cultural, musical, and sports events. European countries, Georgia, Azerbaijan, Japan, Kazakhstan, Turkey, and others, as well as the UN, have started to send humanitarian aid to Ukraine. Germany and the United States committed to sending funds to strengthen Ukraine's defence capability.

Legal proceedings
On the 27th of February, Ukraine filed an official lawsuit against the Russian Federation, to the International Court of Justice (ICJ) in The Hague. Ukraine has demanded an investigation to hold Russia accountable for distorting the concept of genocide to justify its aggression. Given the urgency of the situation, the Court announced the case will be considered on March 7-8, representing a swift response to the events. On another note, the International Criminal Court (ICC) Prosecutor, Karim Khan, opened an investigation into allegations of war crimes and crimes against humanity amid Russia’s invasion of Ukraine. The chief Prosecutor warned both sides that any act of genocide, war crimes or crimes against humanity might fall under the jurisdiction of the court. Although Ukraine is not a State Party to the Rome Statute and cannot refer to the Court directly, it has sent two declarations to legally accept the Court's jurisdiction. According to article 8 of Rome Statute of the International Criminal Court, war crimes include intentionally killing civilians or prisoners of war, torture, sexual violence and pillaging. During his announcement about the investigation, Karim Khan emphasised that it would be expedited if a State Party refers to the situation as provided in Article 14. Later, the chief Prosecutor confirmed that he received referrals of the Situation in Ukraine from the 39 ICC States Parties (including France, Germany, the UK, Colombia and others). The work of the office in the collection of evidence has now commenced.

Geneva International Centre for Justice (GICJ) condemns all violations of international law and international humanitarian law. GICJ calls on Russia to stop military actions in Ukraine and to move towards peaceful negotiations. We further urge the international community to take all possible measures to halt the war, protect the people in Ukraine and prevent further human suffering.