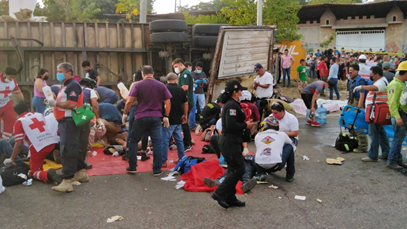 Last Friday, December 9th 2021, Chiapas, Mexico, was the scene of an atrocious accident that led to the death of more than 50 migrants and injured some 107 people, after the truck in which they were traveling overturned, overcrowded and crammed, on their way to cross the border between Mexico and the United States.

Among the victims were men, women and children, mostly from Guatemala, and some from Honduras, Ecuador and the Dominican Republic. These are migrants fleeing poverty and violence in Central America who turn to smugglers who often transport them in extremely dangerous conditions.

The event has prompted calls for the international community to take concrete action to reduce the tragic loss of life during migratory journeys around the world each year. The restrictive policies, increased surveillance, border patrolling and policing causes migrants to use unsafe routes. The International Organization for Migration (IOM) has reported that the death toll in 2021 so far exceeds 4,470. The U.S.-Mexico border in particular is the world's deadliest crossing point. This year alone, at least 650 people have died trying to cross it, more than in any other year since IOM records began.

The state of Chiapas, bordering Guatemala, has witnessed an unprecedented increase in the number of migrants from Central America, many of them smuggled through Mexico. In the 12 months leading up to October of this year, a record 1.7 million migrants, mainly from Mexico and Central America, were detected attempting to enter the United States.

Geneva International Centre for Justice (GICJ) urges that preventive actions be taken to guarantee safe routes for migration. GICJ condemns the smuggling of migrants in all its manifestations, as it threatens the safety and lives of thousands of people every year. State and non-state actors must join forces to dismantle the criminal and organized networks that engage in these illegal practices

Smuggling will keep existing for as long as official, secure and affordable routes are nonexistent for people to reach host states. Smugglers respond to a need for people to cross borders unknowingly, and security policies and extensive border control are one of the reasons why smuggling emerges.

States must adopt concrete policies and mechanisms to address these challenges, and  increase legal and institutional capacities and structures to both provide routes and information to migrants and, at the same time, to investigate and prosecute those responsible for the smuggling of migrants.

The absence or inadequacy of national legislation to suppress the smuggling of migrants in many parts of the world often encourages smugglers to continue their criminal activities without fear of being brought to justice, in a situation of total impunity. It is also crucial that policies aimed at stopping the actions of smugglers are promoted, rather than those aimed exclusively at controlling the passage of migrants and discouraging their arrival, without affecting the organized crime networks and groups that promote and profit from this activity.