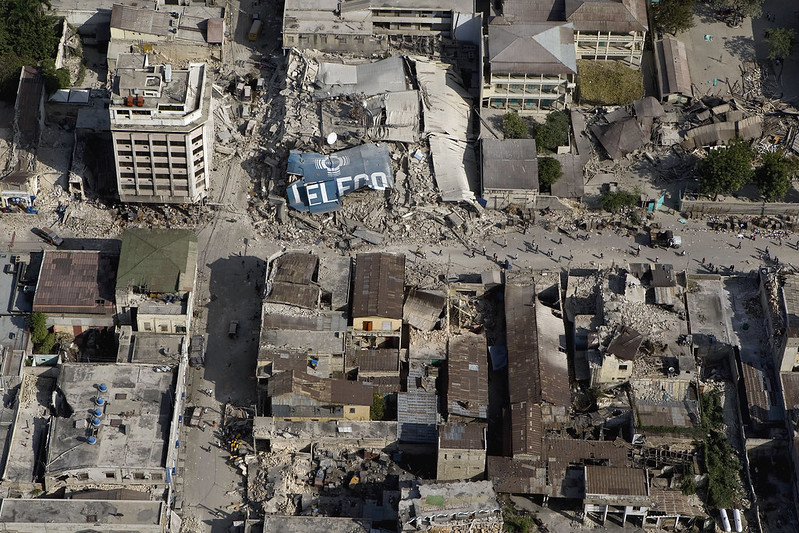 Haiti, the poorest country in the Western hemisphere, has been increasingly battered over the last two decades by constant and devastating natural disasters[1], political and economic instability, exacerbated violence that has increased citizen insecurity, and recently, the assassination of President Jovenel Moïse, which has added further complexity to the scenario of the small island state, whose future is, to this day, still uncertain.

All this has led to a worsening of internal displacements and exodus to third countries. In particular, the earthquake of January 12, 2010, which left the country in ruins, caused the death of more than 300,000 people and internally displaced about 1.5 million;  forced the migration of more than 1.6 million people, representing one-fifth of the country’s population.

At the time, Haitians migrated primarily to South America, especially Brazil, which then demanded cheap labor to build the infrastructure for the 2014 World Cup and the 2016 Rio de Janeiro Olympics; and therefore facilitated the issuance of work visas to Haitians.

It is estimated that between 2010 and 2018, nearly 130,000 Haitian nationals entered Brazil, making it one of the largest immigrant and refugee communities, although fewer than 7,000 were granted refugee status, in part because fleeing a natural disaster does not constitute legal ground for being recognized as a refugee under Brazilian law.

Unfortunately, when Brazil fell into an economic recession in 2014, many Haitians became unemployed, which increased their marginalization and in turn exacerbated racism and xenophobia in the country, a phenomenon that was accompanied, in that scenario of economic decline, by the growing emergence of far-right discourse that fostered racist and anti-immigrant sentiment, and also demanded the restriction of immigration to exclude Haitians and in their case, Venezuelans, from legal protection and national territory.

This led to the gradual movement of Haitians from both Brazil and Haiti to Chile, where then President Michelle Bachelet, as part of Chile's humanitarian response to the 2010 earthquake, had made it easier for Haitians entering the country on tourist visas to obtain work visas once they found employment.

However, as of 2018, Chile was also hit by the right-wing wave and a sociopolitical crisis that has ultimately spread across several Latin American countries and has negatively impacted Haitian migrants' ability to find employment, access services, or otherwise integrate into Chilean society, victims of racial and gender discrimination. Haitians generally faced difficulties in accessing decent jobs, as well as in regularizing their papers.

Faced with this complex situation, Haitians began to migrate in greater numbers from Brazil, Chile and the Northern Triangle of Central America to Mexico and the United States, and from Nicaragua to Costa Rica.

Mexico however had become a host country for Haitians refugees since 2017, after Washington lifted, at the end of 2016, the deportation waiver for Haitian migrants that they had put in place after the 2010 earthquake according to which those arriving undocumented could not be expelled. This caused many Haitians to become stranded on Mexico's northern border, especially in Tijuana, where over the years a Haitian community settled, finding employment opportunities in the maquiladora industry.

However, in Mexico, Haitians also face numerous obstacles ranging from those imposed by language barriers to the more regrettable ones related to racist abuse by immigration officials, other migrants and Mexican citizens themselves, discrimination in employment and housing, social exclusion and isolation.

The emergence of the COVID-19 pandemic marked a decrease in Haitian migration throughout 2020, but in 2021, after the relaxation of health restrictions in most countries in the region, and especially after the assassination of President Jovenel Moïse in July, which plunged the country into a peak of instability and desolation, aggravated only a month later by a new 7.2 magnitude earthquake followed, days later, by tropical storm Grace.

An unprecedented crisis arose, with an increase in the Haitian migration from South and Central America to Mexico on their way to the USA or in search of refuge on the southern border, in Tapachula, Chiapas, the poorest state of the Aztec nation. Thousands of Haitians also set out from their island in makeshift boats for the United States.

In Colombia, thousands of migrants were stranded at the beginning of the year in the municipality of Necoclí, which marks the beginning of the passage to the jungle leading to the isthmus of Panama, through the Darien Gap, and towards the North, in a particularly dangerous crossing due to the presence of criminal groups and human traffickers who control the region and often extort and sexually assault the migrants, mostly women and children.

Today, the scenario is different. In Necoclí itself, a new cluster of Haitian migrants is reported, but in the opposite direction.

The increasing number of deportations to Haiti from the United States by the Biden administration has marked a regression of Haitian migrants to Mexico and the interior of the rest of Central American countries.

Covered by Title 42, a public health order enacted in March 2020 under the Donald Trump administration, the current U.S. government has authorized the collective removal of any migrant and asylum seeker seeking to cross U.S. land borders, without an individual assessment of their circumstances and protection needs, and under the allegation of the need to limit the spread of Covid-19.

This policy constitutes a clear disrespect for the principle of non-refoulement, as it allows the massive and systematic expulsion of potential asylum seekers without due process and individualized assessment to determine their status, violating the norms of international law, and above all ignoring the real situation of violence, instability, lawlessness and humanitarian urgency that prevails in Haiti. An additional element is that these expulsions, supposedly based on public health grounds, have followed a markedly discriminatory and abusive pattern to the detriment, above all, of blacks, indigenous people and Latinos.

Although the Biden administration certainly offers Temporary Protected Status (TPS) to Haitians who were in the United States before July 29, 2021, granting them temporary work authorization and protection against deportation for 18 months, those who have arrived fleeing the situation recently generated in the Caribbean Island, do not benefit from that protection.

Even by resorting to force (supported by the images of the violence unleashed by U.S. Customs and Border Patrol officers in the "capture" of Haitian migrants), an attempt has been made to discourage the influx of Haitian migrants to the U.S. nation. At the same time, the persistence of an abusive and racially discriminatory immigration policy by the current administration of Joe Biden has been noted. According to the IOM, between September 19 and October 9 alone, 7,621 Haitian men, women and children were expelled from the United States on charter flights.

Geneva International Center for Justice (GICJ) urges states to increase efforts to implement social policies for the integration of the migrant communities they receive on their territory, and that these communities are not subject to discrimination and marginalization by state authorities.

We also urge that the flow of migrants and asylum seekers be addressed from the perspective of the protection of the individual, especially in a context of disorderly migration, with a significant involvement of human trafficking networks and migrant smugglers who commit systematic abuses and human rights violations. There is an urgent need for coordinated action by the States of the region to dismantle the criminal networks that have been emerged around these migratory phenomena.

The complex humanitarian situation faced by Haitian refugees, who are fleeing a scenario of extreme poverty, food, climate and political insecurity, must be addressed with a comprehensive, non-discriminatory approach that takes into account, when choosing protection mechanisms, the situation of exclusion and marginalization to which they are commonly subjected.

GICJ urges the Biden administration to put an end to the Title 42 policy under which unlawful removals are being carried out in total disrespect of the principle of non-refoulement, which is a fundamental guarantee for the protection of the individual and human rights. The mass deportations of Haitian migrants only perpetuate the history of racial exclusion of black Haitian immigrants and refugees at U.S. ports of entry.

[1] In the Climate Risk Index, Haiti ranks third in the world. And in the Disaster Risk Index, it ranks 22nd out of 181 countries.