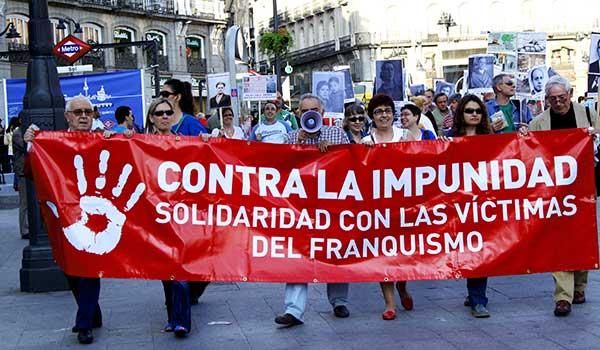 On November 17th, three days away from the death anniversary of Spanish Dictator Francisco Franco, the Spanish coalition government formed by PSOE and ‘Unidas Podemos’ announced plans to register 30 amends to the Democratic Memory Law with the purpose of aligning domestic laws with international law, international customary law and international humanitarian law, under which international crimes have no statute of limitations and for which amnesty laws cannot be granted. The amendment reads: “All the laws of the Spanish state, including the Law 46/1977, of October 15, of Amnesty, will be interpreted and applied in accordance with conventional international and common law, and in particular, with International Humanitarian Law, according to which war crimes, crimes against humanity, genocide and torture are considered to have no statute of limitations nor can be subject to amnesty.”

However, the two parties of the coalition government have reached conflicting conclusions of what this amend would entail. The socialist party (PSOE) has argued that this would not change anything on respect to amnesty while ‘Unidas Podemos’ claimed that the amendment makes the trial of Franco-era crimes possible. The Minister of Democratic Memory, Felix Bolaños (PSOE), has later made clear that the only purpose of this amend would be to reaffirm the Democratic Memory Law making it adequate to international treaties. It has now been revealed that Enrique Santiago from ‘Unidas Podemos’ presented on Wednesday the agreement of the 30 amends to the Memory Law by his own account without the knowledge and the prior approval of its senior associate, the Socialist Party (PSOE). The lack of agreement within the own government signals the great division that still prevails in Spanish society after more than four decades of democracy. The prospects of a successful transitional justice process seem rather bleak if those who advocate for transitional justice do not share an understanding of what path to follow to mend the impunity that the rapid transition to democracy left behind.

The 1977 Amnesty Law and the statutes of limitation are the obstacles that impede the prosecution of the crimes committed during the Civil War and Franco’s regime. The regime came to an end following the dictator’s death on November 1975, upon which all parties involved agreed on the so-called ‘Pacto del Olvido” (Pact of Forgetting) that intended to facilitate a peaceful transition to democracy. The amnesty law was adopted with the wide support of the chamber at the time in a democratic court that counted with ample political representation. Only one party (‘Alianza Popular’) abstained from the voting. The Amnesty Law intended to find forgiveness and move from the politically motivated crimes committed prior to December 15 of 1976. The democratic forces contrary to Franco’s regime at the time hailed this Amnesty Law under chants of “Freedom, Amnesty and Statute of Autonomy”, which were all achieved. Spain, after 40 years of authoritarian rule and repression under Franco, was looking forward to a promising democratic future. That readiness to move forward ultimately drove the country towards total impunity for past crimes.

What is the democratic memory draft law?

The legislation drafted by the left-wing coalition in July 2021 aimed to continue the memorialization efforts that commenced fourteen years ago when Spain passed its first “Historic Memory” law.  The new draft aims to promote the search and exhumations of victims buried in mass graves[1]. These burials continue to be a major source of controversy and division as some believe they should be left untouched while most of the families of the victims argue for the opposite. Moreover, the law, if passed, would create two official remembrance days to honour the victims and those exiled and the victims would be officially registered.

After Franco’s remains were exhumated to be later reburied in a family crypt in 2019, the bill would also re-purpose the mausoleum where Franco had been buried known as “Valle de los Caídos” (Valley of the Fallen). In an attempt to end the exaltation of the dictator and his regime, the mausoleum would become a memorial cemetery holding the remains of those killed on both sides of the civil war.

This news comes about two months after an Interactive Dialogue with the Special Rapporteur on Truth, Justice, Reparations and guarantees of non-recurrence was celebrated in the 48th Human Rights Council Session. There, as reported by GICJ, the Special Rapporteur took notice of Spain’s progress in transitional justice following the announcement of the democratic memory draft law.[2] Praise notwithstanding, Mr. Fabián Salvioli was adamant that all amnesty laws adopted after episodes of military and/or social conflict should be repealed as they constitute an impediment to accountability and they consolidate impunity.

Geneva International Centre for Justice (GICJ) celebrates the commitment of some sectors of Spanish society to fight against the impunity that the 1977 Amnesty Law left. However, we remain concerned that transitional justice is often wielded in Spain as a partisan tool and that often promises are made that have no consequence. Even though past crimes should not be forgotten, transitional justice should be tackled responsibly and unachievable promises should not be made as victims are ultimately re-victimized as a result. Therefore, we call on all political parties in Spain to act responsibly and embrace transitional justice accordingly.

Finally, we would like to note that nothing but a repeal of the 1977 amnesty law will bring truth, justice and reparations to victims of the civil war and Franco’s regime. Aware that this might be perceived as a partisan move and for the sake of avoiding a sense of retributive justice, we encourage the current government to include all stake holders and take a victim-centred approach that ensures national reconciliation. GICJ stands by the remarks made by the Special Rapporteur on the last Human Rights Council Session that the first step towards ending impunity is the repeal of amnesty laws. Only then and ending the statutes of limitation to international crimes can countries really embark on a transitional justice process in line with international standards.

[1] Spain is after Cambodia the country in the world with the largest amount of unmarked mass graves.