The 15 October 2017 celebrates the 9th year of the International Day of Rural Women. This international day was founded on 18 December 2007 by the General Assembly in resolution 62/136. The objective of this day is to recognize: “the critical role and contribution of rural women, including indigenous women, in enhancing agricultural and rural development, improving food security and eradicating rural poverty.”1

Geneva International Centre for Justice (GICJ) wants to commemorate this international day particularly by focusing on all the difficulties that rural women face every day in order to develop and improve their and their countries` situation, and on the important role they play in the food security challenge.  GICJ has the objective of promote and combat for the respect of all human rights, for all populations and in all parts of the world.

This day is one of the three commemorations on which the United Nations celebrate the role of women in development, together with the World Food Day (16 October) and the International Day for the Eradication of Poverty (17 October). These three subjects are strongly interrelated. Indeed, last year the International Day of Rural Women and the World Food Day co-organized a commemoration event that focused on the topic of “Climate is changing. Food and agriculture must too.”

The specific theme for 2017 is going to be: “Challenges and opportunities in climate-resilient agriculture for gender equality and the empowerment of rural women and girls”. According to the UN, climate change can be a factor that will negatively impact the already striking gender inequalities that are present in the agriculture production system today. This is because it will, for example, limit the women’s access to long-term affordable finance. At the same time, women need to be considered as powerful player in order to tackle the challenges that are arising as a consequence of these climatic changes. This is due to the fact that, for example, they tend to take decisions on how to manage and use resources in concern of their children’s and family’s well-being and can therefore play a key role in creating climate resilience.

This is why focusing on reducing the gender gaps that these women are facing and on empowering them can be a way to also build the climate resilience of their countries.

Improving food security - According to the UN, rural women compose more than 25% of the entire world population, and constitute more or less 43% of the total agricultural labour force.2 These data give us an idea of how important these women are for food production and, consequently, how they can and are playing a central role in the fight to try to ensure food security for all people.  However, what is important to notice - and that it is in some way a paradox - is the fact that most of the poor and especially the hungry people live in rural areas, where small agriculture production is dominant. This means that even if these women are playing a key role in the food production and so participating in the challenge to reach food security for everyone, at the same time they are also the ones who are suffering the most from food insecurity today.

Eradicating rural poverty - At the same time, it is also important to point out, as shown again by the UN data, that 76% of the people that are living in extreme poverty conditions live in rural areas3. This is one factor that can explain the fact that they are the part of the world’s population that are suffering the most hunger. In fact, the phenomena of food insecurity and poverty are highly related. Moreover, as show in the FAO report “The State of Food Insecurity in the World 2015”, rural women still face gender-inequalities that limit their ability to contribute to their countries’ development. This fact has important effects on all society’s well-being and furthermore, it is one of the main causes of the low performance of the agriculture production in poorest countries.

Rural women and development goals - Because of their importance and potential as key actors in achieving the Millennium Development Goals (MDGs) in the past years and today the Sustainable Development Goals, rural women should be an important target group of these programs.

According to a UN fact sheet “Facts & Figures: Rural Women and the Millennium Development Goals “, which aims to show in which way rural women are playing a role in the achievement of these objectives, women are limited in their potential contribution to achieving the first goal, eradicate extreme poverty and hunger, because of poor access to infrastructures. In fact, rural women, additionally to the fact that they are the one in charge of the reproductive and household works, need to take care of providing water and fuel to their household. For this reason, they have to reduce their employment participation. What is also interesting to note is that evidences show that if rural women had equal access to productive resources, they would be able to improve the agricultural production in developing countries and also to lead to a reduction of the world’s hungry people by 12 to 17%.4 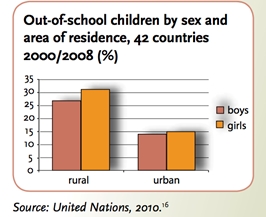 The second goal of the MDGs is to achieve universal primary education, and it is an issue that concerns particularly rural women. Indeed, data show that there is still a remarkable gender difference in primary school, and also between rural and urban children. Furthermore, the graph on the right indicates that rural girls are more probably “out-of-school“ than rural boys. This phenomenon can be explained by factors such as cultural barriers, labour necessities or long school distances. However, the improvement of the rural women educational level should be an important target. Indeed, having a higher educational level can lead to having a better health and producing higher incomes.

Rural women and human rights - During this international day, we should celebrate the important role and contribution that these women are playing every day in order to increase development in their countries and also in the food production. However, another aspect that is important to talk about and that needs to be shown is the difficulties and inequalities that these women are facing while playing their key role. As just mentioned, they are subjected to remarkable gender and area gaps regarding their education, which is an important tool that allows individuals to improve their socioeconomic situation.


Another issue faced by rural women is their difficulty to have and to maintain control of their land rights. According to the World Bank, nearly 70% of the world’s population have difficulties to officialise their land’s propriety because they don’t have access to the land’s registration systems, and women are a group strongly affected by this situation5. This is a particularly important matter given the fact that most of them rely economically on agricultural production to meet their food needs. Moreover, in this period, developing countries are confronted with phenomena such as strong migration or conflicts, and they can have as consequence a high number of females that become the head of their households. In these situations, land right can be a powerful tool that allows them to sustain their families, to increase their socio-economic level and to improve their independence.

Geneva International Centre for Justice (GICJ) holds that education and land right are just two examples of rights that will allow rural women to improve their poverty situation. Indeed, as stated before, because poverty and hunger are two related issues, an improvement of their economic situation will eventually lead even to a better nutritional condition. Progressing rural women’s living standards by improving these conditions is not just a duty because it is their right, but it is additionally an effective way to improve the food production and consequently to reach the fulfilment of the second Sustainable Development Goal. Finally, because of their important role and potential, more efforts should be quickly created and put in place in order to improve their conditions and rights.

Geneva international Centre for Justice is fully committed to the implementation and promotion of all the rural women rights. Equally, GICJ would like to point out the importance of their empowerment, not only to improve their well-being and living conditions, but equally to achieve the Sustainable Development Goals.