Geneva International Centre for Justice (GICJ) expresses deep dismay at the recent visit by the Special Representative of the Secretary-General (SRSG) for the United Nations Assistance Mission in Iraq (UNAMI), Mr. Ján Kubiš, to three militia leaders accused of war crimes and crimes against humanity; especially considering that such behavior jeopardizes not only the credibility of the UNAMI but the United Nations as a whole.

On 27th July 2017 Mr. Kubiš paid a visit to Mr. Hadi al-Ameri, a leading member of al-Hashd al-Shaabi (the Popular Mobilization Commission) and head of the Badr Organisation, known for terrorist acts in and outside Iraq since 1980s. Then on 31st July 2017 he visited Qais Khazaili, the leader of the militia known as Asa'ib Ahl al-Haq (AAH), which is accused of committing grave crimes that outweigh the horrors committed by ISIS. Finally, on the 1st of August 2017, he visited another terrorist suspect, Jamal Jaafar al-Ghanimi also known as Abu Mahdi al-Muhandis, who is the Deputy Chairman of al-Hashd al-Shaabi. According to the information provided UNAMI, Mr. Ján Kubiš met with the three leaders to discuss anti-Daesh military operations, KR-I independence referendum, and political developments in Iraq.

The United Nations Security Council established UNAMI following the US invasion and occupation of Iraq in 2003. Its mandate is to, inter alia, “promote the protection of human rights and judicial and legal reform in order to strengthen the rule of law in Iraq,” and assist the Iraqi government and people of Iraq by “coordinating and implementing programs to improve Iraq's capacity to provide basic services to its people, Effective donor coordination of reconstruction and vital assistance programs through the International Reconstruction Fund Facility for Iraq”.

GICJ receives up to date information from inside Iraq and realizes that the role of the United Nations (UN) and its programs in Iraq has suffered large failures at various levels as well as failing miserably to carry out any of its tasks. Not only are reconstruction programs not going well (if they already exist for that matter) but corruption, from the highest and lowest positions among Iraqi officials since 2003, has drained most of the international grants and aid to Iraq, as well as revenue from the country’s oil imports. Regrettably, the UN has not taken any practical steps to limit corruption but rather has circumvented and probably covered it. Additionally, there has been no improvement towards services that were suffered dur e to the 2003 invasion, the UN was unable to protect the human rights of millions of Iraqis, and also failed to promote a judicial and legal reform as per Article 3 of the UNAMI mandate. What is more is that the judicial system has continued to steadily deteriorate since 2003, and Iraq has shown no sign of the rule of law. Chaos and the rule of militias and criminal gangs prevailed.

In fact, the three individuals met by the SRSG are deeply and primarily involved in the serious violations committed by the militias in Iraq and bear personal responsibility for the abysmal abuses committed and encouraged by the pro governmental militias. They are also known to use the most horrific methods to provoke sectarian violence in Iraq and each is known for their crimes against large sections of the Iraqi people; Abu Mahdi al-Muhandis is even on the list of international terrorists by the US government.

As GICJ repeatedly highlighted in all its appeals and letters to the UN High Commissioner and relevant UN mechanisms, pro governmental militias (and their leaders) in Iraq represent – and continue to represent – a serious threat to the peace and stability in the country. Furthermore, the United Nations and the international community are aware of the heinous crimes and abysmal abuses committed by these militias against the civilian population – in particular during the so-called “liberation campaigns.” 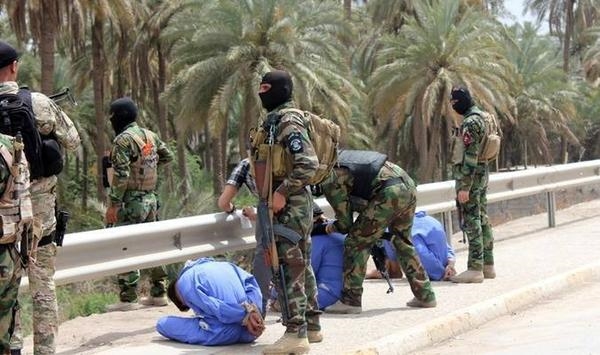 In all their operations, the al-Hashd al-Shaabi militia (lead by the three above-mentioned individuals) conducted brutal and violent abuses, indiscriminately targeting heavily populated civilian-inhabited areas, and committed appalling crimes towards hundreds of thousands of families, that included arbitrary arrests, enforced disappearances, torture, intimidation, summary executions, physical and psychological abuses, as well as brutal torture and verbal abuse against certain targeted people and residents of entire cities. As GICJ has repeatedly condemned the gross inhuman and systematic violations committed against the helpless civilian population during such military operations clearly uncover the sectarian nature of such campaigns. There are unmistakable signs that the entry of militias into any place signifies destruction, theft, and ruthlessness among the population, as is the case within all “liberated” cities such as Jarf al-Sakhr, Dora, Ramadi, Fallujah, Amerli, Tikrit and Mosul.

In light of the heinous crimes and widespread and repeated violations and breaches of international human rights law and international humanitarian law committed by pro governmental militias, it is lamentable that the Special Representative of the Secretary General met with three militia leaders – all of whom are accused of war crimes and crimes against humanity in Iraq – to discuss the political situation of the country. This raises serious questions as these “leaders”, in addition to the crimes committed, engage in hateful speech towards the social, religious, and other minorities in Iraq. Such discourse has harmful and destructive effects on the community and peace as a whole in Iraq, and therefore, meeting them is not expected to have any positive results leading to a better future for Iraq. Furthermore, this also raises serious questions about the goal and mandate of UNAMI as meeting with such persons is in contradiction regarding the said mandate and the Charter of the United Nations.

In conclusion, GICJ believes that the UN should take serious measures to establish an independent international monitoring mechanism in order to hold perpetrators to account for violations and establish a special criminal court for Iraq to ensure justice for millions of Iraqi victims at the hands of militia and terrorist groups. Finally, those victims should be compensated for the suffering and damages done to them.