On the 14th of November 2022, the Universal Periodic Review (UPR) Working Group of the UN Human Rights Council conducted its fourth periodic review of the human rights situation in the Philippines. The country submitted its report on the 8th of August 2022. Taking into account recommendations made by Special Rapporteurs and treaty bodies experts, the Human Rights Council and civil society organisations delivered reports with a compilation of different human rights issues in the Philippines.

As part of the interactive dialogue, participating delegations raised several issues, which the Philippines decided to address and clarify in its responses. Among the topics discussed was the right to life, liberty, and security of persons in the campaign against terrorism, the right to an adequate standard of living, and the right to access education, food, and social welfare. In spite of the country's progress in improving the human rights situation, project “Double Barrel” and the Anti-Terrorism Act have caused potential impacts on human rights owing to their vague definitions and sinister language.

Geneva International Centre for Justice (GICJ) calls for the Philippines to prohibit  all forms of slavery, including trafficking in persons by respecting the economic, social, and cultural rights of women and children. GICJ urges the country to end the anti-illegal drugs campaign and re-consider the Anti-Terrorism Act because they have violated the right to life, liberty and security of persons, and freedom from torture.

The Universal Periodic Review (UPR) is a UN mechanism established in 2006 (Res. 60/251) to examine the progress made by countries in compliance with their obligations under international law. UN member states are examined during each cycle, the current one being the fourth cycle. The Philippines was first reviewed in 2008, in 2012, and finally on 3 May 2017.

The Philippines submitted its country report for the fourth cycle of the UPR in August 2022, in accordance with paragraph 5 of the annex to Human Rights Council resolution 16/21. They emphasised that they fully implemented 200 recommendations while 89 recommendations were considered. These recommendations related to combating discrimination and gender-based violence, maintaining a moratorium on the death penalty, preventing extra-judicial killings, conducting independent investigations, decongesting prisons, further expanding access to justice, protecting human rights defenders and journalists, promoting the rights to education, health, and an adequate standard of living, and upholding the rights of persons with disabilities, indigenous peoples, women, children, refugees, and stateless persons.

Taking into account recommendations made by Special Rapporteurs and treaty bodies experts, the Human Rights Council and civil society organisations delivered reports with a compilation of different human rights issues in the Philippines. Concerns were raised about the country’s cooperation with international human rights mechanisms and bodies, the national human rights framework, as well as the principles of equality and non-discrimination, the right to life, liberty and security of persons, and freedom from torture. The two other concerns expressed by member states of the UN Human Rights Council during the UPR were related to the  right to education and all forms of slavery, including trafficking in persons. Further, attention was given to the rights of vulnerable groups, such as children, women, persons with disabilities, indigenous peoples and minorities, migrants, refugees, asylum seekers, and displaced persons. Finally, the UN expressed concern about the specific human rights situation during the Battle of Marawi in Lanao del Sur Province in 2017.

During this interactive dialogue, the floor was first given to H.E. Mr. Jesus Crispin C. Remulla, (Secretary Department of Justice, Head of the Delegation of the Philippines). Mr. Remulla thanked the UN and the troika for their efforts during the COVID-19 pandemic. He affirmed the universality, indivisibility, interdependence, and interrelatedness of all human rights, respectful of the unique national and regional particularities borne by the diverse historical, cultural, and religious backgrounds in the Philippines. The country has implemented four pillars in order to guarantee human rights, including infrastructure reform and prevention, education of victims and families, social justice enhancement via cultural changes and enforcement, and human rights dignity.

Regarding the recent assassination of prominent journalist, Percival Mabasa, the Philippines are continuously following the Speedy Trial Act of 1998 which requires swift processing of all criminal cases before the courts. The Supreme Court promulgated the 2017 Revised Guidelines for Continuous Trial of Criminal Cases to investigate prolonged pre-trial detention by protecting and advancing the constitutional right of persons deprived of liberty to a speedy disposition of cases. In September 2022, 371 persons, many of whom had already served their sentences, were  released from prison. The government plans to release 5,000 persons by June 2023.

For the rights and welfare of migrant workers, the Philippines enacted a law in December 2021. It calls for the rationalisation of functions of government agencies involved in overseas employment and labour migration, and for the government to appropriate funds. Further, the Philippines has signed several bilateral labour agreements with countries that host large numbers of Filipino migrants, particularly in Gulf countries in order to support labour reforms and advocate the abolition of the kafala system.

Concerning the protection of the environment and addressing climate change, in cooperation with NGOs, the Philippines adheres to the UN Framework Convention on Climate Change and the Paris Agreement on Climate Change and submitted its Nationality Determined Contribution (NDC) in 2021. Moreover, the country is determined to eradicate discrimination, especially violence against women. It enacted the Safe Spaces Act of 2019 which penalises gender-based sexual harassment committed in public spaces, including educational or training institutions, workplaces and cyberspace.

Finally, Mr. Remulla highlighted that the Philippines shall sustain its human rights advocacy in a democratic system of governance under the new administration of President Ferdinand R. Marcos, who won the May 2022 presidential election. The country guarantees the right to equal access to education, food, healthcare, and social welfare. 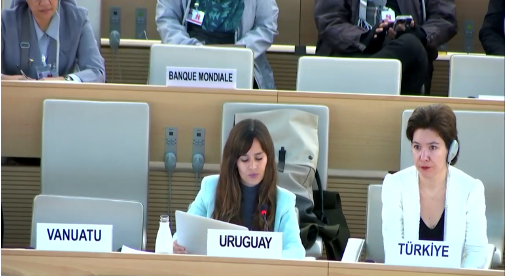 In the first four months of 2020, the killings of persons suspected of drug-related offences, and of human rights defenders increased rapidly. The “Double Barrel” campaign which was initiated in 2016, has caused potential impacts on human rights situations in the Philippines owing to its ill-defined and ominous language. The Philippines Anti-Illegal Drugs Strategy adhered to a holistic and human rights-based approach to illegal drugs and the use of dangerous drugs that led to the incline of capital punishment. Uruguay called on the Philippines to end this campaign immediately, while Argentina and Chile emphasised that the country must reform its legal framework to combat illegal drug usage and protect human rights. In response, the Philippines’ campaign against illegal drugs adhered to internal standards and cooperation. It is a signatory to the three UN treaties that comprise the international legal framework for drug trafficking, i.e., the 1961 Single Convention on Narcotic Drugs, the 1971 Convention on Psychotropic Substances, and the 1988 Convention against Illicit Traffic in Narcotic Drugs and Psychotropic Substances. Further, Mr. Remulla noted that the country has pursued a human rights-based approach to drug control under the UNJP and in partnership with the UNODC, Joint United Nations Programme on HIV/AIDS, World Health Organisation, UN Women, and the OHCHR. 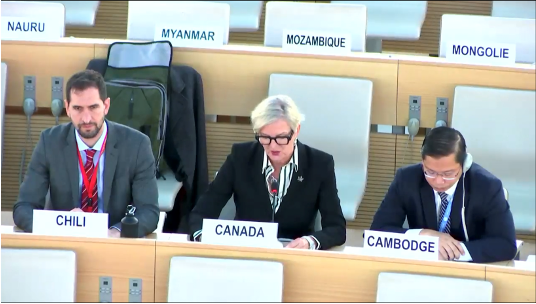 The Philippines has developed a draft basic education plan, that established, inter alia, long-term priorities and provided for increased budgetary allocation. During the Covid-19 pandemic, the Philippines adopted the “Basic education learning continuity plan for the school year 2020-2021 in light of the Covid-19 public health emergency”. However, teachers and students at indigenous community learning centres have been attacked and harassed. Azerbaijan, Bhutan, Brunei, and Bulgaria expressed concern about the negative impact of the Covid-19 pandemic on the enjoyment of the right to education. Canada and Australia called on the Philippines to guarantee the full participation of all indigenous persons in education. As a reply, Mr. Remulla emphasised that the education sector had consistently obtained the largest budget allocation among all NGAs. In 2022, the government launched the medium-term Basic Education Development Plan 2030 for the implementation of both formal education and non-formal education. The country sustained the implementation of the ALS as the main educational inclusion program for marginalised and vulnerable groups.

Prohibition of all forms of slavery, including trafficking in persons 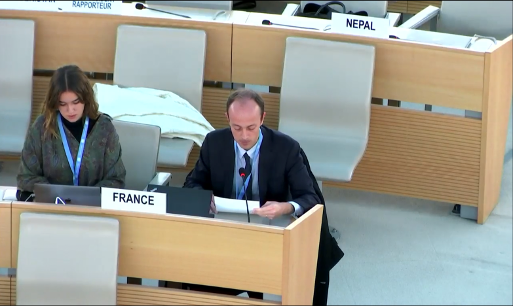 During the Covid-19 pandemic, there had been concerns about an increase in the vulnerability to trafficking and online sexual abuse and exploitation of children. The risks of trafficking faced by women and girls increased. Belarus and Brazil urged the Philippines to combat all forms of slavery, including trafficking in persons. Chile, Cuba, Denmark, Ecuador, Estonia, France, Italy, and Japanemphasised that the Philippines must ratify the International Convention for the Protection of All Persons from Enforced Disappearances as soon as possible. In response, the Philippines passed the landmark Anti-Enforced or Involuntary Disappearance Act in December 2012, making it the first country in Asia to criminalise the practice of enforced and involuntary disappearances. The country enacted the Expanded Anti-Trafficking in Persons Act of 2022 to grant authorities additional tools to combat human trafficking in the online landscape. The Philippines was also a State Party to four Multilateral Treaties, including ASEAN Treaty on Mutual Legal Assistance in Criminal Matters; UNTOC and its Protocols, Convention on Cybercrime, and ASEAN Convention against Trafficking in Persons, especially Women and Children.

Geneva International Centre for Justice (GICJ) calls on the Philippines to reform legal frameworks for the protection and promotion of human rights within the country.  We urge the country to end the anti-illegal drug campaign immediately and provide relevant policies in compliance with international human rights law, such as ratification of the International Convention for the Protection of All Persons from Enforced Disappearances. To conclude, we urge the Philippines to invest in educational infrastructure in order to ensure the full participation of all students in the country.