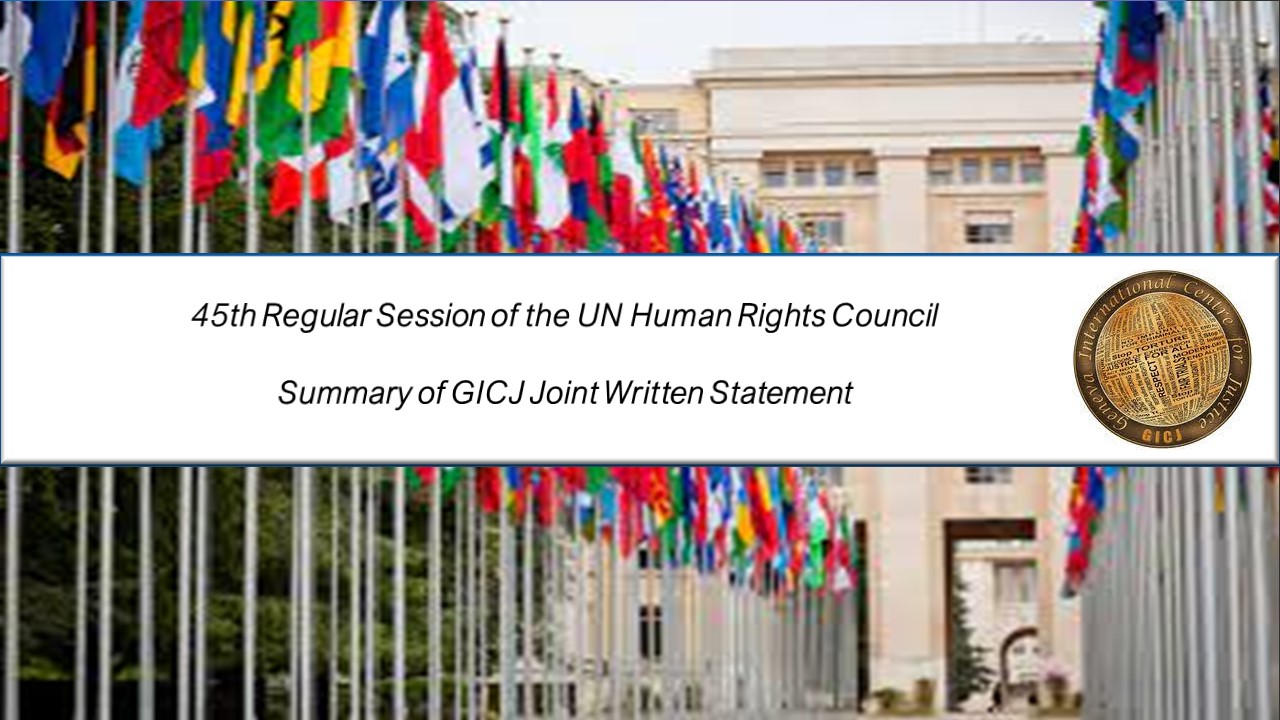 GICJ submitted several joint written statements at the 45th Session of the Human Rights Council. These statements addressed pertinent and persistent human rights situations, violations and concerns. A total of 7 written statements were published and may be read in summary below, with links to their full versions as uploaded by the Secretariat.

This written statement focuses on the situation of political prisoners in Nicaragua, who have become increasingly vulnerable due to the COVID-19 pandemic.

Since 2018, Nicaraguans have been protesting against their government and peaceful protesters have been regularly attacked and detained by national police forces. These arrests had no legal grounds and constitute a violation of international human rights treaties. Released detainees have also reported discrimination against political prisoners in the form of extreme isolation and a lack of access to basic healthcare.

The Nicaraguan government continuously uses a system based on arresting and releasing the same amount of people around a certain time. This allows the government to continue using arrests of political opponents as a strategic tool to inhibit political opposition, while regularly releasing political detainees, in an effort to maintain its public image.

Since the beginning of the pandemic, the Nicaraguan government has been ignoring health recommendations of the WHO. The lack of response of the government has put at risk the health of Nicaraguan citizens, especially that of political prisoners. In fact, prisons are facilitators of the spread of communicable diseases. This is especially the case in overcrowded prisons, where close contact between inmates is unavoidable. Particularly in Nicaragua, the prison overcrowding level is alarming, the current occupancy level of prisons standing at roughly 178%.

We are concerned about the continuous cases of incarcerations of human rights defenders, especially in times of a pandemic.

The Fight against Discrimination is Far from Over

Although the world is constantly progressing the human rights of all individuals, the fight against racism and discrimination is far from over. In recent years, there has been a rise in hate speech and discrimination around the world. Far-right politicians and groups have capitalized off their racist agendas, convincing the masses to adopt a similar mind-set. As a consequence, hate speech and discrimination are slowly becoming normalized, elevating white supremacy and tolerance for anti-migration and anti-white sentiment. With international treaties designed to combat racism, these countries must be reminded of the documents they have signed which prevent this type of discriminatory behaviour.

Adopted by the General Assembly in 1963, the United Nations Declaration on the Elimination of All Forms of Racial Discrimination outlines the body’s views on racism and calls on States to take direct efforts to consistently condemn racism and promote tolerance. Then, in 1965, the United Nations adopted the International Convention on the Elimination of All Forms of Racial Discrimination (ICERD) which is a legally binding document that commits its signatories to the elimination of racial discrimination and the promotion of understanding among all races. GICJ calls on all Member States to sign and uphold both of these international treaties in order to provide justice for discriminatory behaviour. GICJ highlights that in order to respect every human being’s dignity, citizens must not only be held accountable for hate speech and discriminatory actions, but reparations must be given for any victims involved.

Racism has become a disease our world has failed to eradicate and until all countries uphold their duty to fight against racial discrimination in all its forms, racism will continue to thrive. Politicians too often foster a xenophobic climate by blaming immigrants for increasing crime rate and identity loss, despite evidence depicting no correlation. Racist discourse in politics is feeding into the public’s fear of migrants and the rejection of minorities within their society.

GICJ called on the Human Rights Council to urge all Member States to condemn racial discrimination, continue to criminalize groups who preach racial superiority, and hold all citizens accountable for hate speech and discriminatory actions. Further, tangible steps for how States can hold accountable hate speech when committed by politicians and government officials should be provided. Lastly, the Human Rights Council must emphasize the importance for all Member States to implement the Durban Declaration and Programme of Action (DDPA) and promote the commemoration of its 20th anniversary in 2021.

Poverty, migrant status, insecurity, gender inequality, and forms of discrimination based on race, ethnicity, sexual orientation, etc. are all vulnerabilities to trafficking. In fact, traffickers tend to target people exhibiting these vulnerabilities.

Climate change exacerbates these vulnerabilities. Sudden-onset disasters, such as extreme flooding or prolonged, more frequent wildfires cause large-scale displacement within a particular region, during which cases of trafficking are likely to increase.

The communities that are most vulnerable to trafficking-in-persons are also those most affected by climate change. This is particularly true for developing nations, where many live in extreme poverty and are highly dependent on natural resources for their survival. While it should be widely acknowledged that trafficking does occur in developed economies, victims and survivors are most often members of marginalized communities who are facing greater burdens for survival, as it is those with the least power in a society who are the first to be exploited.

In this regard, GICJ urges UN Member States to adhere to resolution 44/7 on Human Rights and Climate Change, adopted by consensus at the 44th session of the Human Rights Council. We also recommend UN Member States to ensure that mechanisms for safe and legal migration are in place to protect the basic human rights of those fleeing violence, destruction, and death due to climate change.

This statement focuses on the continued human rights violations at Xinjiang re-education camps in China, where the Chinese government is arbitrarily detaining millions of Uighurs and other ethnic and religious minorities.

Despite the government’s assertions to the contrary, there are serious human rights violations perpetrated against Uighurs and other Muslim communities in Xinjiang. Those include torture, arbitrary detention, mass surveillance, as well as disappearances in re-education camps.

The “Sinification of All Religions and Beliefs” was a policy officially declared by the Chinese government in 2017, with its ultimate goal being the systemic restrictions on Uighur culture and the practice of Islam.

China’s systematic assimilation policy is a severe violation of internationally recognized human rights, including the right to freedom of thought, conscience, and religion, freedom from torture, as well as freedom from arbitrary detention. As a state party, China is in violation of its obligations under the ICERD, which states in Article 2 that “each State Party undertakes to engage in no act or practice of racial discrimination against persons, groups of persons or institutions and to ensure that all public authorities and public institutions, national and local, shall act in conformity with this obligation.”

In this regard, GICJ urges China to immediately close these detention centres and respect the human rights of ethnic and religious minorities. Furthermore, China should grant unfettered access throughout Xinjiang to the UN experts. Lastly, China should ratify the International Covenant on Civil and Political Rights (ICCPR) and make itself available to a periodic examination by the Human Rights Council.

The Pandemic and the Rise of Authoritarianism

This statement focuses on the increasing shift to authoritarianism during the COVID-19 pandemic, and the long-term threat to democratic institutions and human rights. There is a grave risk of leaders using the pandemic as an excuse to increase domestic power in ways offensive to human rights.

In fact, global leaders have had to take extensive and immediate action to minimize the pandemic. However, some leaders, acting under the guise of public health, have sought to permanently increase their power and crush voices of dissent.

Numerous States have weakened democratic institutions and norms since the beginning of the pandemic. Such action goes well beyond what is necessary to curtail infections, and dismantles fundamental ideals of democracy, such as the free press and governmental accountability.

This statement outlines examples of countries where authoritarian behaviour was reported, namely China, Hungary, Israel, the Russian Federation, Turkey, as well as the United States of America.

The biggest threat to democracy stemming from the pandemic is the attack on freedom of expression. Such conduct is in direct violation of Article 19 of the Universal Declaration of Human Rights (UDHR) and Article 19 of the ICCPR.

In this regard, GICJ recommends the United Nations to act decisively to condemn power grabs that are unrelated to the health crisis at hand. The Human Rights Council should further appoint a Special Rapporteur to monitor and investigate the abuses of governmental emergency powers, and to prohibit such conduct from becoming permanent once the coronavirus has been contained in the country.

Occupied Palestinian Territory: The Right of the Palestinian People to Self-determination

Forced unilateral annexation of a territory violates established international law, including the Charter of the United Nations, the Fourth Geneva Convention of 1949, and the Rome Statute of the International Criminal Court. Despite its clear illegality, Israel has proceeded with illegal unilateral forced annexations in the past. Israel intends to annex parts of the West Bank, and will proceed to do so, unless the international community takes urgent steps to condemn the annexation and force Israel to abandon its illegal plans.

It is imperative that the international community mobilise urgently in a unified response to Israel’s plans for illegal annexation. Mere words are insufficient and countermeasures are required to put an end to the threats of annexation and to demand the end to the illegal occupation.

This written statement sheds light on the violations of human rights by private detention centre operators carrying out these actions under the responsibility of the U.S. Government. The State responsibility of the U.S. government is incurred by the State’s duty to properly supervise and control these private detention centre operators.

The U.S. government has often outsourced the task of detaining migrants to private companies, which are referred to as non-State actors (NSA). As discussed in the statement, NSAs often have a record of abusing the rights of noncitizens who are under their control.

The U.S. government agency Immigration and Customs Enforcement (ICE) has been given the primary responsibility for the detention of noncitizens as civil (pre-trial) detainees, to ensure their attendance at their immigration hearings or for their removal. This agency sometimes delegates this responsibility to NSAs, that make significant profits from running detention centres.

The COVID-19 pandemic has highlighted the inadequacy of private detention centres’ healthcare and health emergency preparedness, which led to an outbreak in several detention centres. The absence of adequate preparedness protocols coupled with inadequate steps to protect detainees constitutes a violation of the right to health of the detainees.

In this regard, GICJ urges the Council to specifically mandate the relevant special mechanisms of the Council to examine and report on the practices of NSAs that are involved in the detention of noncitizens in the United States of America. While we are aware of the Report of the Special Rapporteur on migrants’ rights on this subject, we believe it deserves follow-up based on extensive onsite visits. The Council is also urged to demand that the U.S. government end the violations of noncitizens’ rights by NSAs and to compensate victims for the violations of their rights that have already occurred.