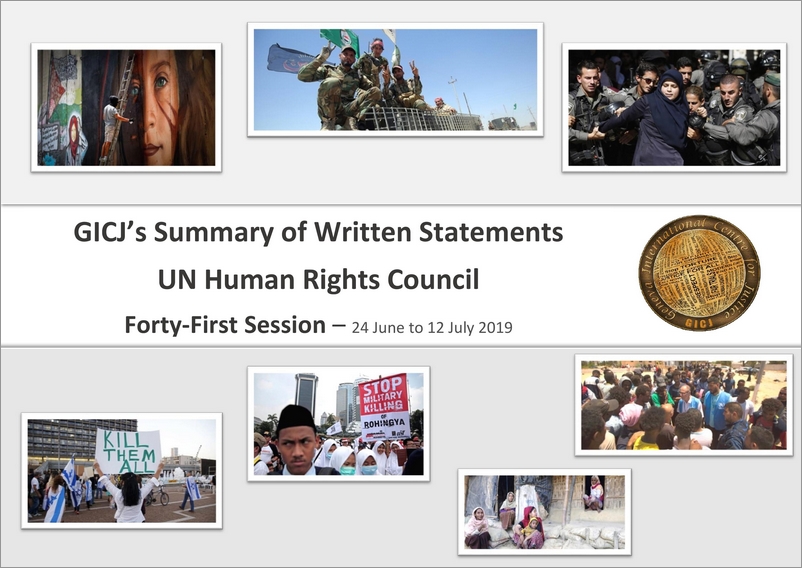 Geneva International Centre for Justice (GICJ) submitted 12 joint written statements with other NGOs prior to the 40th Regular Session of the United Nations Human Rights Council (HRC). Eleven of the statements were published on the HRC website. The statements covered several specific country situations and included recommendations to the Council, member states, and other relevant bodies and stakeholders.

Corruption is dangerously rampant in Iraq, leading to direct human rights violations. This is despite Iraq acceding to the UN Convention Against Corruption (CAC). Iraq is neither honoring its international commitments, nor its duty to safeguard the rights of its people.

Corruption is seen in business, governance; the oil, electricity, and health sectors, among others. It takes various forms -- bribery, illegal government contracting, and fraudulent government staffing (overstating the number of employees to receive and pocket a higher budget for that office).

In addition to causing billions of dollars’ worth of damage, the extent of corruption violates people’s right to healthcare and an adequate standard of living, and children’s right to education. Corruption in the justice system means unfair sentences, a lack of accountability, and people have to pay through their nose to be treated with dignity in the trial process. Finally, discrimination is legitimized through corruption, specifically targeting vulnerable populations.

GICJ is appalled at the scale of corruption in Iraq, and the government’s inability or unwillingness to stem it since 2003. Our report to the UNHRC calls on all stakeholders- the Iraqi government, international community, and the UN itself- to step up and put an end to corruption in Iraq.

Rule of Law in Iraq

Rule of law is a principle of governance in which everyone, including the State itself, is accountable to laws consistent with international human rights standards. However, extensive reporting exposes blatant violations of the rule of law at every level of Iraqi governance.

At the legislative level, elections to the Council of Representatives favor certain ethnicities, and use non-Constitutional methods of selection along sectarian lines. Some laws that the legislative assembly passes violate international law, such as the 2005 Anti-Terrorism Act that allows the liberal use of the death penalty.

Within the executive level, reports have emerged of rampant corruption and bribery. In fact, a former Iraqi minister admitted to it, speaking to the widespread use of corruption, and the difficulty of eliminating it. Additionally, armed militias which enjoy the full support of the government, conduct mass extortion and violation of the human rights of vulnerable civilians in some Iraqi provinces.

Finally, in the judiciary, scant respect is given to rights guaranteed in the Constitution, especially the rights to life, fair trial, and protection against torture. Violating these rights also violates international human rights and humanitarian law. Instead, the judiciary does not provide an effective check on the arbitrary, inhumane, and extrajudicial exercise of power by the state.

Geneva International Centre for Justice (GICJ) condemns this disrespect for the rule of law, and recommends:

Since the outbreak of the armed conflict at the outskirts of Tripoli on 4 April 2019, thousands of persons have been killed or wounded, including innocent civilians. Despite a UN arms embargo and universal agreement that there should be no military support for any of the parties in Libya, some countries have been blatantly ignoring these international understandings.

The situation of returnees and IDPs in Libya is critical. The IOM estimated that since the onset of armed fighting in Tripoli, 66,000 individuals and 13,000 families have fled. In addition, 871 migrants have been returned to Libya and placed in detention since 4 April. The illegal detention of migrants and their placement in often overcrowded detention centres is also a source of major concern, together with the lack of early detection of potential refugee candidates and persons in need of special care.

Geneva International Centre for Justice (GICJ) urgently recommended the international community to enforce the arms embargo and foreign powers to refrain from interfering in the Libyan civil conflict. We appeal to all States concerned to immediately put an end to all returns to Libya, as it violates international human rights law to return Libyans to their unsafe country. Also, considering the large number of IDPs, we call upon the parties to agree upon a humanitarian ceasefire and to allow humanitarian workers to have access to areas where their intervention is much needed to provide assistance to civilians and war victims in accordance with the principles of neutrality, impartiality and independence.

The government of Myanmar has not undertaken any measure to stop the vicious cycle of fighting and violence between the military and ethnic armed organizations with a view to initiating a genuine political dialogue. The persisting climate of confrontation and violence between ethnic groups and the military is not at all conducive to a political dialogue and peaceful coexistence in the country.

The crimes committed against the Rohingyas from the outbreak of violent confrontations between the Tathmadaw (the military) and the Arakan Rohingya Salvation Army can amount to the gravest crimes under international law, including genocide. Genuine justice for victims cannot be delivered as long as the military shields itself behind laws providing for immunity and therefore total impunity.

In addition, the scale of sexual violence, including rape, against Muslim women and girls living in Rakhine, Kachin and Shan States by State security forces is simply appalling and may amount to war crimes under international criminal law.

Geneva International Centre for Justice (GICJ) call upon the government of Myanmar and the international community to:

Since the outbreak of unprecedented violence against the Rohingya and other ethnic minorities, and despite compelling evidence of genocide and crimes against humanity perpetrated at the hands of Myanmar military forces, hate speech, discrimination and blatant violations of the most fundamental rights continue unabated in Myanmar. There continue to be restrictions on the freedom of worship for Muslim faithful, notably in Chauk Township and Rakhine State, and the worrisome increase in inter-religious hostilities could lead to more bloodshed.

A vote was conducted in Chauk Township to decide whether two mosques could continue to be used. Even though a public vote may seem the most democratic way of taking decisions, local, regional and central authorities in Myanmar must respect that a public vote – even if it was organized in strict compliance with the relevant legal provisions – may never justify the violation of fundamental rights enshrined in international human rights treaties. Therefore, a minority can never be denied the right to practice its faith in its sacred places unless the conditions of legality, necessity and proportionality of the restriction are fulfilled. In the present case, it appears clear that the refusal is not justified by any public imperative.

Hate speech against Arabs by Israeli political representatives and people in positions of power has an alarming impact on the Israeli society, since it gives legitimacy to discriminatory behaviours and contributes to widespread xenophobia.

Hate speech can even evolve into violent acts amounting to hate crimes, that are fed by political instrumentalization and manipulation and create misconceptions and fear. Hate crimes against Palestinians very often occur without accountability, largely due to a lack of commitment by the Israeli authorities to prosecute the offences.

During the 41st UN Human Rights Council, Geneva International Centre for Justice called on the Council to take prompt action against the widespread phenomenon of hate speech in Israeli society and to put pressure on Israel to enact and implement specific domestic legislation aimed at criminalizing racist and xenophobic hate speech.

The treatment of human rights defenders (HRDs) by Israel has deteriorated steadily over the years and has now reached an alarmingly serious point. Individuals, groups, and organisations that act to promote and protect human rights in Israel and in the Occupied Palestinian Territories (OPT) are constantly under attack by the Israeli Government.

Israel has constantly implemented practises aimed at keeping foreign nationals out of the West Bank. Among these, the denying of entry permit is a systematic policy aimed at designating as “public enemies” those that oppose the occupation and associated human rights violations. The procedures adopted against HRDs during border controls clearly show that they are aimed at frightening, deterring and dissuading individuals and groups from defending and promoting human rights in the OPT.

Human Rights Defenders are subjected to a criminalization policy by Israel, which is taking place through the prohibition of peaceful protests in the OPT and arbitrary arrests often based on false criminal charges. Furthermore, criminalization results in heavy legal costs for individuals and organizations that are targeted.

Deflecting the attacks against HRDs is a challenge to the international community that requires reorientation from civil society organizations, and everyone concerned with safeguarding human rights in Israel and in the Occupied Palestinian Territories.

For these reasons, Geneva International Centre for Justice in its joint statement urged the Council to take urgent action against the criminalization policy adopted by Israel against human rights defenders, which violates the Declaration on the Right and Responsibility of Individuals, Groups and Organs of Society to Promote and Protect Universally Recognized Human Rights and Fundamental Freedoms.

Palestinian women are subjected to psychological and physical violence during arrest, interrogation, investigation and detention by Israeli authorities, such as sexual harassment and rape. Those cases involve both police officers and officers of the Israeli Security Agency (SHABACK).

There is a lack of data and information about women who have been subjected to rape in detention and prison. This is due to social and psychological factors that prevent the victim from disclosing the circumstances of her arrest and assault.

The practice of subjecting women to abusive and humiliating conditions, as well as to sexual threats, is used by interrogators as a method of putting pressure on detained women during interrogations for different purposes, such as in order to obtain a confession or to gather the information they need.

Geneva International Centre for Justice maintains that these acts are a flagrant violation of international laws and treaties to which Israel is a part. It is necessary to adopt prompt measures aimed at encouraging women victims of such abuses to report those acts as well as at promoting general awareness on the issue. Accountability for those violations that occurred in the past must be guaranteed and prevention measures to avoid future violations must be developed.