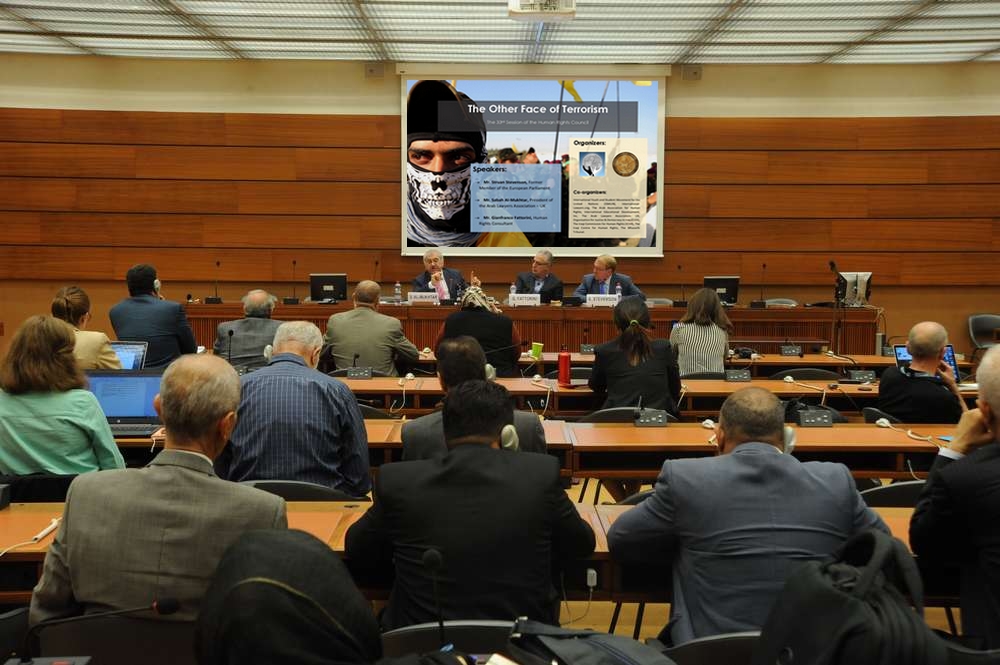 On 15 September, Geneva International Centre for Justice, in cooperation with the International Organization for the Elimination of All Forms of Racial Discrimination (EAFORD) and several other NGOs, organized a side event during the 33rd session of the UN Human Rights Council titled “The Other Face of Terrorism”.

This event aims at analyzing the increasingly concerning role of militias within the framework of combating terrorism in the Middle East, as well as their close connection and ties to regional powers, which, therefore, translate into the failure of states to protect civilians and guarantee peace and stability to their citizens. In this regard, the organizers find that it is important to highlight that terrorism can’t be framed into one specific group or one specific behavior. Doing so, would mean legitimizing all other forms of terrorism, including groups who commit crimes of the same gravity and entity of other officially-designated terrorist organizations.

When thinking about “terrorism”, one, most surely, immediately associates the term with groups such as al-Qaeda and the fairly “new” Islamic State of Iraq and Syria (ISIS, or ISIL), whose acronym is ever so mentioned on national news channels and newspapers. Whereas these terrorist groups are surely committing heinous crimes against humanity, which deserve as much media coverage as possible, there are numerous other terrorist factions that have emerged in the past few years, whose crimes, in contrast, not just do not get as much international interest, but they are not even classified as terrorism.

These factions are hundreds of pro-government militias, which are guilty of committing war crimes, crimes against humanity and genocide on a purely sectarian basis, which include enforced disappearances and arbitrary detentions, summary executions, torture and other degrading treatments and, finally, ethnic cleansing.

Mr Gianfranco Fattorini, Human Rights Consultant and moderator to the event, briefly introduced the subject of the meeting to the audience, then introduced the two speakers of the side event; Mr. Struan Stevenson, Former Member of the European Parliament, and Mr. Sabah Al-Mukhtar, President of the Arab Lawyers Association – UK*.

Mr Fattorini then gave the floor to the first distinguished panelist: Mr Struan Stevenson, who began his intervention by explaining that all Shia militias in the region (especially in Iraq, Syria, Yemen and Lebanon) share something in common: they are all funded by the Iranian regime. Their brutality is as criminal as that of ISIS and the atrocities committed are violent and sectarian. One striking example of this was the military campaign against Fallujah (Iraq) of May 2016, launched under the pretext of fighting ISIS. The military operations which levelled the city to the ground and caused thousands of civilian casualties were openly granted Iranian military advise. The Iraqi Foreign Ministry, Mr Stevenson explained, publicly declared the cooperation with Qaseem Soleimani, commander of the Iranian Al Quds Forces. The crimes these militias commit have been confirmed by the High Commissioner for Human Rights on multiple occasions. 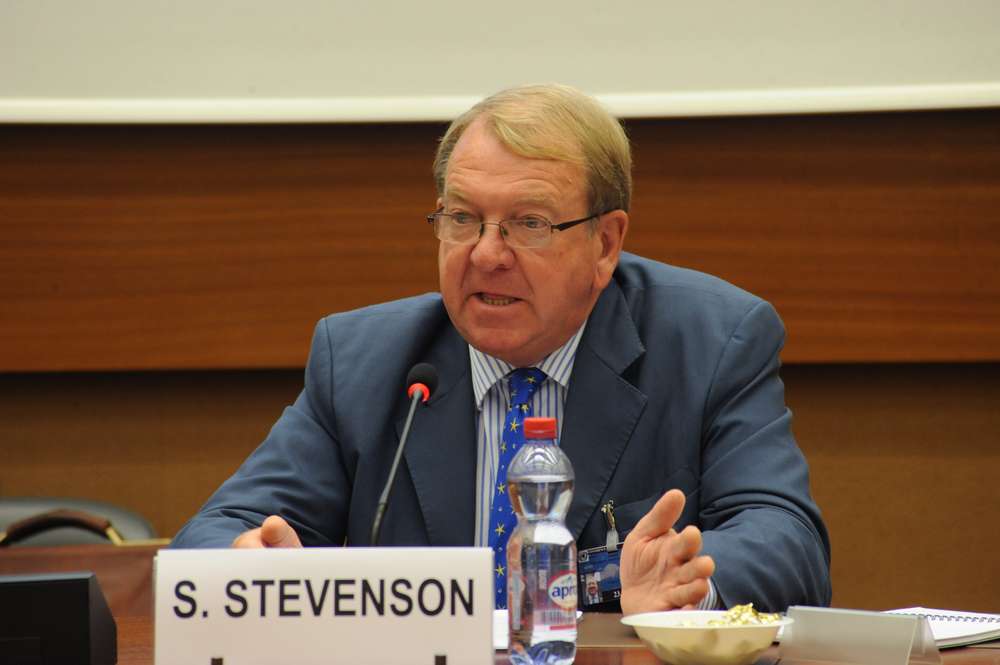 Mr Stevensons then stressed how that of Fallujah is not an isolated case in Iraq: many have been the instances in which we had witnessed the same pattern. Ramadi is perhaps another clear example of the government-promoted policies of violent sectarianism which are tearing Iraq apart. The city was reduced to dust and rubble, while the male population disappeared. And soon enough it will be the turn of Mosul, second largest city of Iraq. If the city was to suffer the same fate, there will be little hope left for Iraq.

The speaker further explained that the presence of militias in the country is a result of the 2003 US administration’s decisions. When US appointed Paul Bremer as head of the Coalition Provisional Authorities (CPA), it was clear that the disaster was unavoidable. He dissolved the armed forces and the security forces and created a dysfunctional “new” security apparatus mostly made of militia members. Later, the growth of militias was to be attributed by former Prime Minister Nuri al-Maliki’ s genocidal policies. Such climate of instability -Mr Stevensons said- opened the door to ISIS in 2014.

Mr Stevensons reiterated that the international community can no longer be silent in front of the atrocities committed by militia units. There is urgent need for real action and reform. For instance, Iraq must re-include the Sunni minority and eradicate corruption as well as reforming the system.

Mr Fattorini then thanked Mr Stevensons for his constructive remarks and introduced the second speaker to the event: Mr Sabah Al-Mukhtar, President of the Arab Lawyers Association – UK.

Mr Al-Mukhtar underlined that the behavior of the international community vis a vis Iraq is at the basis of the current situation. In this regard, he recalled the events of the First Gulf War to denote how the military interventions of the West and the excessive and disproportionate use of force that characterized them, led to the complete destruction of the country. Mr Al-Mukhtar defined what happened in Iraq at the hands of the so-called “Coalition of the Willing” as nothing less than an act of genocide. 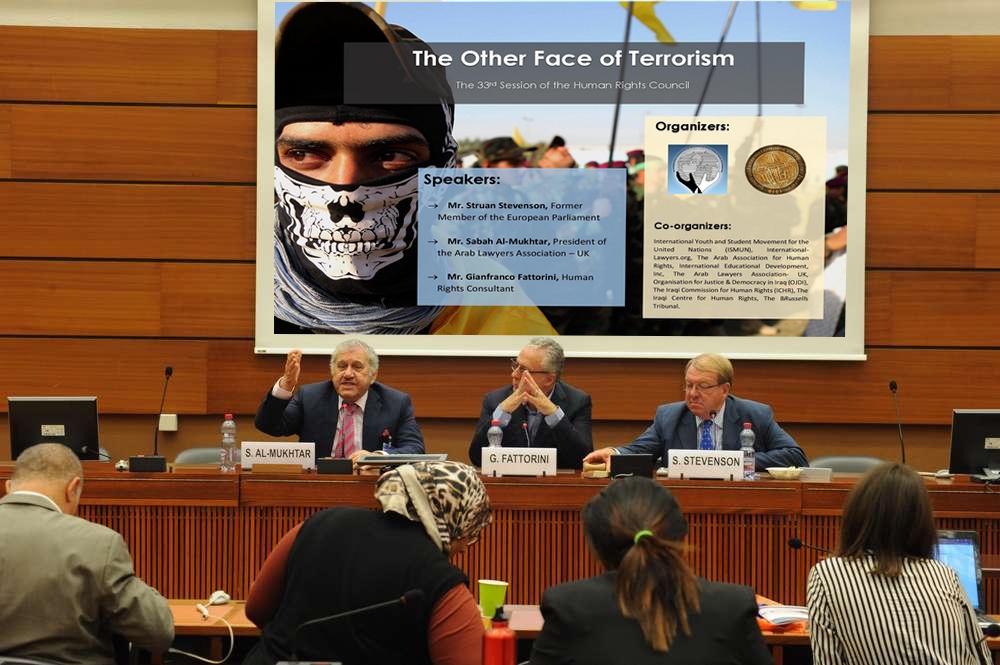 This dramatic combination of factors set the foundations for the proliferation of sectarian militia units which are today committing atrocious crimes. Nevertheless, all the attention only focuses on ISIS. In spite of the fact that UN reports clearly confirm the violations perpetrated at the hands of these armed groups, Mr Al-Mukhtar denounced the selective approach adopted by the international community in these regards.

The speaker finally explained that indeed there are instruments to address the situation in Iraq, as well as in other countries of the region. For instance, the international community must immediately stop dealing with states that support such terrorist groups. In this context, Iran must be pressured to stop all kind of interference into other states’ internal affairs, such as through funding, arming and training militias. In addition, he added, the UN has as a pivotal role in pressuring state responsibility. Contrarily to ISIS, militia members’ identities are in fact well known to the Iraqi authorities so there is a potential for accountability.

Mr Al-Mukhtar concluded his intervention by reminding that “liberation campaigns” in Iraq are a lie: no territory has ever been “liberated” by pro-government militias, but rather reduced to dust.

Finally, the audience welcomed the speakers’ remarks and posed a few questions with regards to Western intervention across the Middle East to remedy the consequences of their actions. Moreover, a query was raised regarding the destruction of cultural sites by militias and the responsibility of the UN, and in particular UNESCO, in protecting and preserving them.

With their appreciation, the speakers concluded the meeting emphasizing that what we are seeing today is a consequence of the wrong policies of the West. These have dramatically affected the region, encouraged the birth and growth of ISIS and provoked the current waves of migration. These countries should now deal with these issues and try to remedy their actions.


Mr. Sabah Al-Mukhtar
President of the Arab Lawyers Association – UK
As a lawyer, and human rights defender, Mr Al-Mukhtar has been an outspoken person against the activities of terrorist groups and warned in many conferences about the rise of militias and associated grave human rights violations. He has also analysed on multiple occasion the role of Iran in the creation and support of these groups and how this is used as a tool to interfere in the internal affairs of its neighbouring countries.


Moderator
Mr. Gianfranco Fattorini    Human Rights Consultant
Mr. Fattorini has been active as a Human Rights  defender in the framework of the UN Human Rights machinery for more than 20 years. Among the many activities, he was Coordinator of the Swiss-Burma Association, President of the Fondation pour l'Expression Associative (Geneva) and Co-president of the French "Mouvement contre le racisme et pour l'Amitié entre les Peuples" (MRAP).