GICJ participated with ISU MPRIMI in organising a side event entitled “Role of Foreign Actors” at the Thirty-Seventh Session of the UN Human Rights Council. The event took place from 12h00 to 13h00 on 8 March, 2018 in Rm XXV at the Palais des Nations, Geneva, Switzerland. 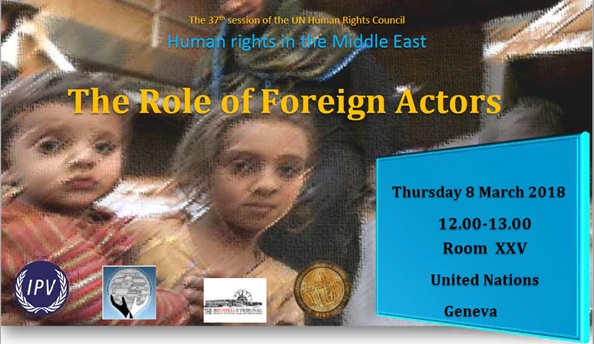 Mr. Ahmed Al Quraishi:      Researcher and writer. As a journalist, he has worked extensively in Iraq, Pakistan, Lebanon, Syria, and the Gulf region over the past 24 years. He is currently associated with in independent, Islamabad-based think tank (projectpakistan21.org).

Dr. Tarek Chindeb:            PHD in, and prof. of International Criminal Law, Lawyer since 1999, member of the Council Directors of the International Union of Jurists.

Mr. Baraa Shiban:              Human rights defender who investigates drone strikes in Yemen and have testified in the US congress on the effect of the drone program on local communities. 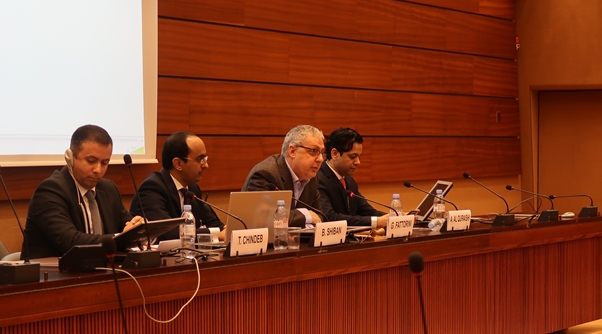 The moderator Mr. G. Fattorini opened the panel discussion by noting some important factors with regards to foreign actors such as the economic side and globalization and that this sometimes creates a protectionist reflex. Often foreign actors are super powers attempting to impose themselves even with the intention of weakening the international system. In such instances finance and manipulation by non-state actors destabilize the region they invade. He ended his opening remarks by mentioning that during the process of destabilization ethnic, religious, and economic fields are being exploited. 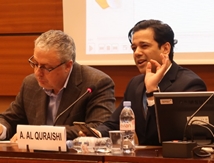 The first panellist to take the floor was Mr. Ahmed al-Quraishi who began by observing that there is another major transformation taking place in Middle East but with a different type of development involving ISIS and a proxy warfare. However, we are witnessing different militias replacing ISIS and are mostly state-backed. While Iran is not the only country to use militias in such a manner the scale of the Iranian project is “breath-taking” especially considering the diversity of fighters and scale of fighting, which is unprecedented and very successful. He went on to say that ISIS has re-shaped the region, which is now being decimated and replaced by small militias. This is an “experiment” that apparently no one has done before and is a new type of threat, which means as Mr. al-Quraishi explained, that people do not know how to respond as they are within the fault-lines and in a very complex situation. Further, Mr. al-Quraishi cautioned that in a few years we will see the Iranian Development as a main threat. Currently, there is a meeting of two “mights” as the West is meeting with foreign countries and local foot-soldiers.

This clash became realised due to the theory that ISIS was formed in Western countries where some orchestrators used asylum laws and freedoms in the West to formulate and create ISIS theories and then related them back in their countries; the foot-soldiers evidently embraced such ideas. He went on to note that after the decimation of ISIS the new development is the rise the rise of Iran-backed militias who are now replacing ISIS. Additionally, there are key developments on this aspect from foreign actors. Looking back at important historical junctures it is necessary to acknowledge that the US invasion in Iraq was a major changing point as well as the combination with international coalitions in Iraq; ISIS became prominent when these two proxies were recognised.

Mr. al-Quraishi further went to speak on how the situation of Afghanistan was a great success for Iran especially as a long-term project involving Iran, Russia, and India that formed a Northern alliance forming a low key but important foot hold. He additionally noted the importance of the establishment of Hezbollah in Lebanon, the 1983 blast, Bahrain, and the 1979 Revolution in Iran as small but critical chapters in the formation of the Iranian Development. Iran has a huge project across the region and is doing an impressive job as they have the added advantage of the clergy, mullahs, and the religious factor that no one can replicate. This means that they have the ability to recruit citizens of other countries willing to fight and further Iran’s interests. He noted that no one else has had such diverse fighters from the Middle East and beyond. Furthermore, in education institutions speakers address students to indoctrinate and recruit them by speaking on issues such as Syria, however, as Mr. al-Quraishi reports, the students adamantly refuse to listen to them demonstrating that Iran is facing trouble recruiting locals. On the other hand recruits from Pakistan, for example, are very convinced and do not believe that they are fighting for Iran but for something much larger.

In conclusion, Mr. al-Quraishi noted that one moves into a sectarian debate when encountering militias. Finally, despite seeing the US proxies in Libya among many other serious issues the scale of the Iranian project is amazing and very difficult to encounter and solutions are seemingly very far-fetched and when Iran uses the religious factor as an excuse it becomes even more difficult to cleanse these actors. 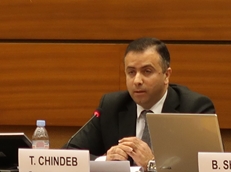 The second panellist, Dr. Tarek Chindeb, on the outset made a call to confirm the terrors in Iran and said the sectarianism and extremism will be hard to confront especially since these factions are challenging the government and killing and committing atrocities without any responsibility and full impunity. Iran has struck Iraq and Yemen and is using these instances to send a message to other countries. Turning to the issue of proof that Iran is involved in striking the said countries, Dr. Chindeb referred to United Nations Security Council (UNSC) Resolution 2213 that confirms that Iran used Houthi militias as well as Iranian made arms and weapons that were used in destabilizing the region.

The Syria example, however, is the more painful and leading example in the region as there are also interventions and interferences by various countries and women and children are now being killed by bombardment by Russian fighters who also use chemical weapons. Dr. Chindeb went on to say that since the Syrian revolution there has been much struggle and suffering and areas have even been described as slaughterhouses. Additionally, several international organizations have confirmed that the Syrian government has been killing its citizens since 40 years ago.

On the scale and intensity of the atrocities, Dr. Chindeb revealed that reports by the Commission of Inquiry in Syria confirmed the use of chemical weapons and that these violations were associated with various forms of foreign interventions:

•    The first was the Iranian interference where all Iranian leaders confirmed that they were the ones who wanted to protect the Syria regime by sending fighters to slaughter Syrians. Dr. Chindeb noted that we have witnessed these crimes being committed by militias. Moreover, they have contributed to mass abuses, crimes against humanity, and the ethnic cleansing of Syria.

•    Secondly, the Hezbollah interference by the request of Iran as well as a numerous fighters who killed about 30,000 Syrian people without any accountability.

•    Third is the role of Russia who not only gives political support in the Security Council as they have used their veto power eleven times but have also used navy power and on the ground troops who kill and commit many crimes against humanity. Over 1 million Syrians have died due to these violent actions.

Regarding the role of so-called terrorist groups, UNSC Resolution 2401 confirmed that the military intervention by Russia should stop. Putin, however, said he would stop for only five hours a day in order to allow children to flee and seek care, moreover, Iran still has much of the power. Dr. Chindeb noted that Al-Qaeda and Daesh (so-called ISIS) were created after the Syrian revolution as before there was no ISIS/IL who fought on behalf of the regime as it was a proxy war. He said that we know this to be the case as there were made agreements in Mosul and other cities that demonstrate that these terrorist groups fought on their behalf and their documented fighters were used by Iranian authorities and militias to extend the fighting. Additionally, they said that their violent actions were necessary and there was an alleged statement saying that “when a person is ready to kill their own people it is very easy to lie”. Dr. Chindeb went on to say that the lie of ISIL and Al-Qaeda was created by the regime for the aim of creating other terrorist regimes. The crimes against humanity, war crimes, and other atrocities by the Syrian regime was done with the involvement of Iranian militias and there should be international conditions to condemn the perpetrators and bring them to justice otherwise the systemic killings will continue.

In conclusion, Dr. Chindeb said that terror has been exposed based on the cooperation with Arab States. Furthermore, Iranian authorities boast that they have captured terrorists, in other words ISIS, from several cities. However, this is the exportation of a revolution and they say that religion orders them to carry out these horrors in order to confuse the public. 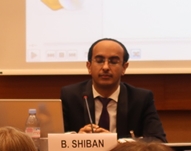 The final speaker, Dr. Baraa Shiban, demonstrated that when everything is put into context in order to realise the real threat in the region it is evident that the use of proxies in certain states and recruitment of foreign actors can be used to further a specific agenda.

Dr. Shiban then looked at the effect of the Iranian Project inside Yemen taking into account activities that occurred in the 80s, 90s, and up until today’s civil war that does not appear to have an end in sight. This is due to a weak central government that marginalizes people especially from decision-making processes. He said in 1985 the Houthi visited Iran and considered joining the brigade to fight Saddam Hussein. This demonstrated that Iran could recruit a foreign brigade to fight a Middle East country. However, the Houthi members became unpopular with local communities and eventually clashed.

With regards to Yemen he then pointed out that through observing the Yemeni society it is possible to see small traces of Houthi influences. Yemen, by following the Arab Spring, has a transition period that led to a draft constitution with participation from everyone including the Houthis. However, in 2014 the UNSC had a meeting to issue Resolution 2140 in order to neutralize all states with activity in Iran including a UN panel of experts to identify individuals and entities that were going to obstruct the transitional period inside Yemen. To demonstrate the relationship the links between Iran and Yemen, Dr. Shiban pointed out that in the group of experts’ January 2017 Report Iran was mentioned 75 times and in their January 2018 Report Iran was mentioned 111 times. The group of experts identified links between arms in Yemen to Iran who also presented short range missiles and unmanned vehicles to Houthi and other militias and provided advisors as well. This is how Iran started creating small militias He also said the panel traced manufacturing evidence in Iran with Farsee labelling and the medium-sized unmanned vehicles have identical designs to those manufactured by Iranian industries. The report went on to provide other such links with tanks and other missiles.

Dr. Shiban concluded by explaining the activities and role of Iran in Yemen who also staged the coup that led to the creation of a civil war. Reiterating what al-Quraishi said, when the government clamps down on its people they will be accused of targeting minorities and as soon as the government takes power the amount of arms and weaponry support increases making it impossible for the state to cope with the strength of the militia. Today in Yemen the militia is stronger than all components despite being a minority.

Watch the full side-event in Arabic or English.