The 49th Regular Session of the Human Rights Council,

Item 4 - Interactive Dialogue on the OHCHR Report on the Situation of Human Rights in Belarus in the Run-Up to the 2020 Presidential Election and in its Aftermath (HRC res. 46/20)

At the 32nd and 33rd  meetings of the 49th session of the Human Rights Council, held on the 17th of March, Ms Michelle Bachelet, United Nations High Commissioner for Human Rights, discussed the human rights situation in Belarus in the run-up to the 2020 presidential election and in its aftermath. The High Commissioner highlighted the human rights violations committed in Belarus since the presidential election in 2020 including the use of arbitrary detention, torture, police brutality, and illegal convictions.  Mr Andrei Taranda, the Belarusian representative to the UN, denied all allegations and characterised the report as “politically biased”.

Ms Bachelet’s report on the current human rights situation in Belarus, received widespread support from the Human Rights Council with the exception of the Democratic People's Republic of Korea, the Syrian Arab Republic, Venezuela, and the Russian Federation who considered the recommendations given by the High Commissioner to be an “interference to the internal affairs of a sovereign state”. Ms Bachelet called on the Government of Belarus to release unjustly detained civic activists and provide an enabling environment for the promotion of fundamental human rights.

The longest-ruling president of Europe, Alexander Lukashenko, has presided as the Belarusian head of the state since 1994. His political career has often been criticised by independent NGOs and states due to persistent violations of human rights and his reelection to the role in 2020 was accompanied by mass protests throughout the country. Independent organisations characterise his presidency as a usurpation of power leading citizens of Belarus to accuse the Central Election Commission of falsifying the results of the election. Protests in Belarus began on the night of August 9-10, 2020 in connection with the announcement of the official electoral results. Since the first days of the protests, witnesses have reported the use of excessive violence to disperse demonstrators while detainees, including women and teenagers, reported systematic beatings in prisons. As a result, in 2021, many protesters received criminal convictions for participating in the protests. States and organisations around the world have condemned the actions of the Belarusian government and president Lukashenko himself. The 2020 presidential elections have not been recognised by the majority of the international community.

Michelle Bachelet, the United Nations High Commissioner for Human Rights (UNCHR), presented the report on the situation of human rights in Belarus in the run-up to the 2020 presidential election and in its aftermath (A/HRC/49/71). She declared that the Office of the High Commissioner for Human Rights has found considerable evidence of human rights violations committed between 1 May 2020 and 31 December 2021. All security forces in the country, including the National Security Council, were involved in the conflict in all 6 regions of Belarus. She noted that protesters were beaten by security forces until they lost consciousness and at least 3 protesters died during mass protests.  Belarusian authorities have denied responsibility for the deaths. Ms Bachelet stated that between May 2020 and May 2021, at least 37,000 people were arbitrarily arrested and detained. Furthermore, between 9 and 14 August alone, approximately 13,500 were arrested including 700 children. 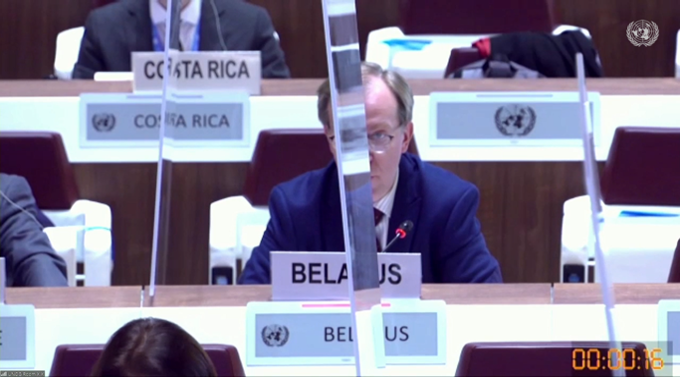 Mr Andrei Taranda, the Belarusian representative to the UN, speaking on behalf of the country concerned, claimed that Belarus had already provided the Human Rights Council and other international organisations with relevant information relating to the 2020 presidential election. The representative accused western countries of undermining  the legitimately elected government of Belarus with unrelenting campaigns of direct threats relating to economic sovereignty, economic sanctions, daily fake news, and political pressure. He criticised the adoption of resolution 46/20 claiming that it is filled with unfounded accusations and false conclusions that do not relate to the human rights situation in Belarus. Belarussian delegate claimed that the recommendations of the resolution aimed to support any organisations against Belarus and argued that this practice was incompatible with the principles of the United Nations, which aimed at violating the sovereign rights of the State and interfering in its internal affairs. Representative of Belarus said that his country did not recognise the resolution, which was in flagrant violation of the UN Charter, and undermined the independence of the High Commissioner for Human Rights. On the emergency landing of a RyanAir flight in Minsk, the Office of the High Commissioner had disseminated fake and fabricated information about the forced seizure of a passenger. The speaker of Belarus said that the suspension of the flights of European airlines to Belarus had overnight denied millions of Belarus citizens and those of other countries their freedom of movement. The ambassador of Belarus has raised the point of order several times to ask the delegations to use official UN terminology and speak only about the issue on the agenda. Delegates from several countries accused Belarus of supporting the Russian invasion of Ukraine and called the current government a “regime”. The President of the Human Rights Council called the delegations to focus on the subject of the agenda. Meantime, he reminded the participants that all delegations have their right to freedom of expression.

Iceland on behalf of Nordic-Baltic countries expressed concern about human rights violations committed in Belarus and condemned the Russian invasion of Ukraine as well as Belarus’s involvement in it. The European Union accused Belarus of detaining at least  1,100 political prisoners in inhuman conditions and subjecting them to torture. The delegate of Lichtenstein highlighted the violations of freedom of expression, freedom of assembly, and freedom of associations in Belarus.

Representatives of different countries, such as Germany, Finland, France, Australia, Belgium, Poland, and the U.S. strongly condemned the detention and torture of civilians as well as other unacceptable human rights violations perpetrated by the Belarusian authorities. Moreover, the delegates criticised the Belarusian government for its involvement in the Russian aggression toward Ukraine. They called on authorities within Belarus to take necessary measures to combat human rights violations. However, the representatives of the Democratic People's Republic of Korea, the Syrian Arab Republic, and Venezuela did not agree with their colleagues and assessed the report of the High Commissioner as political interference in the internal affairs of Belarus. The delegate of the Russian Federation accused the UN human rights institutions of providing a biased and politicised viewpoint within the High Commissioner's report claiming that it was based on questionable methods and unverified testimonies that presented a unilateral and oversimplified analysis of events in Belarus.

Numerous NGOs expressed their deep concern about the detention of human rights activists in Belarus. They were particularly concerned about the closure of almost 275 civil society organisations, noting that targeted attacks by the government against human rights activists and organisations pose a threat to the democratic development of the country. Many NGOs claimed that guilty verdicts handed down by the courts against demonstrators underline the lack of judicial independence within the Belarusian legal system. Representatives reminded the Council that the use of arbitrary arrest and detention, as well as torture, are not acceptable in any country. Many Belarusians fled the country due to threats made against their lives. The speakers from NGOs thanked the High Commissioner for the work carried out  by her office in identifying systematic human rights violations in the territory of Belarus. They called on the Republic of Belarus to prevent the continuation of human rights abuses and urged the government to promote and protect human rights law. Additionally, the speakers criticised  Belarusian authorities for supporting the Russian invasion of Ukraine and called for a cessation of hostilities.

Ms Bachelet thanked the delegations for their participation and gave concluding remarks. Many delegations raised the issue of accountability for human rights violations in Belarus. The High Commissioner noted that the issue of accountability is fundamental for the analysis of what has occurred in order to provide recommendations and reduce the chances of such violations being repeated in the future. In the best case, this process should occur at a national level where the Government would assume the protection of human rights and guarantee the right to remedy. Ms Bachelet acknowledged that there was little prospect of achieving accountability within Belarus for the human rights violations that took place in the country. Therefore the report contains recommendations addressed to the government of Belarus and other recommendations for the states to act in universal extraterritorial jurisdiction in accordance with international standards to take action to advance accountability in these particular circumstances. The report was focused on human rights violations and identified clear abuses that could constitute international crimes with the report calling for a further assessment of these troubling offences. Ms Bachelet encouraged the government of Belarus to meet its obligations under international human rights law, including the obligation to effectively, independently, and promptly investigate human rights violations and take actions to hold perpetrators to account. The High Commissioner discussed the importance of providing justice and effective remedies to victims and lamented the fact that the situation is not improving. The Office of the High Commissioner has set a clear picture of ongoing violations. She highlighted that collecting, analysing, and preserving evidence is key for accountability and prevention. Several delegates asked Ms Bachelet about the human rights violations in connection with the situation in Ukraine. She informed the Council that her office has received several complaints about ongoing repressive measures taken against civil society organisations and civic activists. She noted the detention of 800 participants in an anti-war protest held in Minsk despite the peaceful context of the event. The High Commissioner informed the Council that the United Nations will continue to monitor the human rights situation in Belarus.

Geneva International Centre for Justice (GICJ) condemns all ongoing human rights violations in the Republic of Belarus. We express our deep concern about the arbitrary detention and torture of civic activists, journalists, and human rights defenders in Belarus. The widespread display of public grievance in the aftermath of the 2020 presidential election has highlighted the desire for democratic improvements within the country. We call on the government of Belarus to respect fundamental human rights and ensure independent and fair investigations into the mistreatment of all detainees. GICJ condemns illegal arbitrations based on political prosecution and police brutality during mass demonstrations as well as in detention centres. Citizens of Belarus should be allowed to fully exercise their rights to freedom of expression, assembly, association, and speech without hindrance. We welcome the work of the High Commissioner for Human Rights and hope that the recommendations contained within her report will be implemented by the Belarusian authorities.