On the 8th of March, the UN Human Rights Council (HRC) held an interactive dialogue with the Special Rapporteur for cultural rights, Alexandra Xanthaki. During her opening remarks, Ms Xanthaki spoke of the importance of cultures for the development of individuals and societies and the realization of all human rights. She conveyed her objectives for her mandate, including raising awareness and promoting the cultural rights and freedoms for migrant artists, gay, bisexual, transgender, intersex and disabled artists as well as cultural rights of marginalized communities. Speaking about the ongoing Russian aggression in Ukraine, Ms Xanthaki said that any justification of war must step away from rhetoric that denies the cultural identity and history of a nation, as these are important elements of the right to self-determination. The Special Rapporteur reiterated the joint call by all United Nations Special Rapporteurs to end the war in Ukraine.

During the interactive dialogue, speakers emphasised the promotion of cultural rights through the inclusive participation of persons in vulnerable situations.  Numerous states underscored the right to freedom of artistic expression including the opportunity to express opinions and beliefs through art in any media. State representatives highlighted that in many countries, cultural professionals were being denied the right to participate in public life, and blasphemy laws among others were being used to deny artistic expression. Women, cultural practitioners, and ethnic minorities, in particular, were suffering from restrictions on their right to artistic expression. Egypt concluded that culture represented soft power and needed to be freed in order to uphold cultural and civilizational identity.

The mandate in the field of cultural rights is a part of the Human Rights Council Special Procedures, which was first established in 2009. The scope of the tenure is dictated in the Human Rights Council’s Resolution 10/23. The Resolution also sets out the contours of the legal framework that the Special Rapporteur is required to use. At the core of this legal framework is Article 27 of the Universal Declaration of Human Rights, which recognizes that everyone has the right to freely participate in the cultural life of the community, to enjoy the arts and to share in scientific advancements and its benefits. Also supporting the Special Rapporteur’s mandate is Article 15 of the International Covenant on Economic, Social and Cultural Rights, which creates legally binding obligation for the parties to this Convention to ‘recognize the right for everyone: (a) To take part in Cultural life; and to (b) To enjoy the benefits of scientific progress and its application. These provisions, in conjunction with other human rights instruments, are essential to understand the full responsibility placed on the Special Rapporteur for cultural rights, which includes the realization of substantive equality in the exercise of cultural rights. The Special Rapporteur is also guided by Article 27 of the International Covenant on Civil and Political Rights, which requests that States Parties  ensure that persons belonging to minorities “shall not be denied the right, in community with the other members of their group, to enjoy their own culture, to profess and practice their religion, or to use their own language.”

The Special Rapporteur emphasised that culture is a positive element drive for the realization of human rights. The recognition and protection of cultural rights is described as a tool for affirming one’s identity and ultimately, a tool of empowerment. Tangible Manifestations of culture are identified in the report as an essential factor of the right to cultural life. This sentiment was substantially strengthened by the international Criminal Court in 2006 after a member of the public was found guilty of committing a war crime by destroying a cultural heritage. In her report, the Special Rapporteur expressed her intent to continue the work on preserving cultural and commemorative structures for the elimination of elitist and biased historical narratives.

Ms Xanthaki also expressed her commitment to exploring further the benefits of protecting rights to intangible culture, including rights to expression, cultural practices, values, views, customs and traditions, as their manifestations need to be protected for the well-being, health and development of the individual and the society. The report makes a distinction of intangible culture from traditional values, which have been mistakenly equated often by elites, particularly male-dominated elites.

Lasty, the Special Rapporteur highlighted her commitment to further unpacking the relationship between natural diversity, the environment and cultural rights, since maintenance of natural environments has been linked as a vital element for the preservation of culture. In addressing this concern and all other concerns alike, the report invited all stakeholders to participate in the ongoing discourse on promoting cultural rights and to help build resilience in the social societies  regarding violations.

The interactive dialogue invited speakers to express sentiments on the agenda and work methods set out in the report, to address the particularities of cultural life within their own states and recommend to the Council, as encouraged by the Special Rapporteur, good practices for delivering the objectives set out for this tenure.  Essentially, the interactive dialogue enabled states to expand on the Special Rapporteurs report from their own unique national perspectives.

Alexandra Xinthaki, Special Rapporteur on Cultural Rights began her opening statement by stating that all eyes are focused on  Ukraine, as Russian aggression continues to unfold. Ms Xinthaki called for all military actions to remain sensitive to the diverse cultural and religious heritage of Ukraine and to recognize the full and multipart identity of the state. She urged states to welcome and accept, without discrimination, those who are fleeing from war and to prevent the of cultural life as they prepare to welcome an unprecedented number of refugees. Ms Xanthaki also called on the international community to recognize and not diminish the cultural identity of Russian citizens as their culture is politicized in the wake of the unprovoked aggression in Ukraine. She articulated the various objectives for her mandate, which includes addressing and promoting the cultural rights of migrants and vulnerable individuals and safeguarding the different manifestations of culture, whether tangible or intangible, as they all are vital components to cultural life. Additionally, she invited all stakeholders and actors involved in this journey to come forward and share good practices and advice on how to further the right to cultural and related rights. 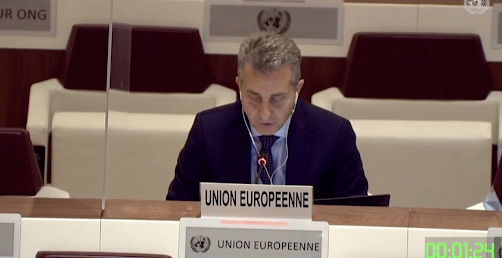 The distinguished representative of the European Union welcomed Ms Xinthaki’s report. He expressed the EU’s dedication to strengthening the right to culture and highlighted actions taken by the regional institutions to promote cultural rights, including measures taken to include the persons in vulnerable situations in the decision-making process. One such measure is the Creative Europe Programme, which aims to safeguard, promote and develop European culture, linguistic diversity and heritage, while placing a special focus on supporting women and socially marginalized groups. The representative ended their marks by asking the Special Rapporteur if they see any potential in using digital technology to further cultural rights in her mandate. 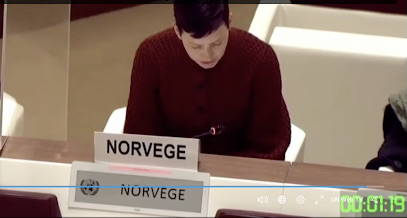 The delegate of Norway spoke on behalf of the Nordic Baltic countries declared that they place great importance on all human rights including the rights of each person to access and participate in cultural life without any discrimination. The delegation stated that the right to freedom of artistic expression, includes the right to express ideas, opinions through arts or any media of one’s choice.  It was highlighted that in many countries artists and cultural workers are subjected to censorship, discrimination and prosecution and are thus unable to practice their right to artistic expression and cultural life. Women artists, cultural practitioners and minority groups were said to be disproportionately subjected to cruel treatment such as harassment, prosecution and imprisonment as a result of their work. The delegate emphasised that culture is an important aspect in life, for all members of society regardless of their gender, ethnicity, sexuality or disability. Lastly, the representative ended her statement by asking the Special Rapporteur how the right to culture could be guaranteed for marginalized individuals and groups. 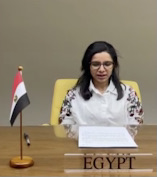 The delegate for Egypt welcomed Ms Xinthaki’s report and wished her success during her mandate. When speaking of the importance of culture, the delegate stated that culture represented soft power and needed to be freed in order to uphold national identity. It was asserted that Egypt is committed to elevate the level of cultural enjoyment as set out in Egypt’s 2030 agenda.

The person speaking on behalf of Egypt added that while the pandemic obstructed progress in other areas of life, it did not hinder the development of the right to culture in Egypt. They stated that Egypt had continued to inaugurate and promote events remotely during the pandemic, therefore extending the reach of these creative expressions to those who would not have had the resources and capability of participating before remote access was enabled. Egypt’s commitment to defend and uphold cultural freedom by disseminating the value and importance of social culture was likewise reaffirmed.

The representative of Fiji extended her gratitude to the Special Rapporteur for her report and the work completed under the mandate to mainstream cultural rights through the realization of its indivisibility and interdependence with other rights. Cultural diversity was stated as one of Fiji’s greatest strengths, for they recognize that the shared cultural exchange between people across the globe is one of the greatest ways to foster deeper understanding and harmony. The country’s representative added that in Fiji, the management of coastal resources such as fisheries and ecosystems consist of a governance system that incorporates indigenous culture and traditions. This is done to ensure such traditions are accurately reflected in mechanisms that aim to safeguard the environment. The practices which stem from Fiji’s ancestors and forefathers were said to support and foster conservation and sustainability. Emphasis was placed on combating climate change, as it has already severely undermined the cultural heritage and identity of Fiji. The rapidly rising sea levels have forced coastal communities to relocate, severing the connection indigenous communities have with their land and the connection that completes their cultural identity. Finally, a call for the Council and international community to strengthen their commitments to fight against climate change for the sake of cultural and other human rights was made.

The Geneva International Centre for Justice (GICJ) warmly welcomes the fruitful and productive statements, which have emphasised the importance of cultural rights for the development of communities, societies, and other human rights, including the right to equality and non-discrimination. GICJ supports all the efforts taken by states to realize cultural equality and freedom. We call on all states to fulfill their obligation under international law to safeguard the right to culture, whether through its tangible or intangible manifestation, while placing a special focus on vulnerable groups who are often persecuted for participating in cultural life.  Furthermore, we urge all states to cooperate with the Special Rapporteur during her mandate and further reiterate the invitation made by Ms Xinthanki for stakeholders to recommend good practices and conduct that may help realize objectives set out in her report. Ultimately, GICJ wishes Alexandra Xanthaki success during her tenure and hopes to see close collaboration between her and states in addressing concerns that relate to an individual’s often intangible, but vital right to cultural freedom.