ITEM 2 – HC oral update, followed by a presentation of reports on OHCHR activities in Colombia, Guatemala, and Honduras

On 8 March 2022, during the 49th regular session of the Human Rights Council, the High Commissioner, Ms Michelle Bachelet, delivered a comprehensive oral update on the recent developments of the human rights situation in Colombia, Guatemala, and Honduras, alongside Cyprus and Eritrea. The High Commissioner called on the authorities to prioritise strengthening the rule of law, in particular access to justice, the promotion of civic space and citizen participation. The importance of economic, social, and cultural rights was emphasised as well as the adoption of measures to progressively achieve their full realisation. The promotion of equality and non-discrimination of persons in situations of vulnerability was highlighted alongside the prevention and early warning of social conflicts and human rights violations.

The statement by the Honduran delegation focused on the protection of women’s rights, LGBTQI people’s rights, human rights defenders and environmentalists. The government's commitment was guaranteed in terms of dismantling the process of political persecution of human rights activists, communicators, justice and life defenders. The Secretary of State reaffirmed the government’s strong will to respect indigenous peoples and stressed that in the first months of Castro’s presidency, the first political prisoners have already been released.

On 4 May 2015, the United Nations High Commissioner for Human Rights signed an agreement with the Government of Honduras, concerning the establishment of a country office. In accordance with its mandate, the office of the High Commissioner for Human Rights in Honduras (OHCHR-Honduras) monitors the situation of human rights in the country and provides capacity-building and technical assistance to state institutions. It also engages with national human rights institutions and civil society organisations, with the overall goal of enhancing the promotion and protection of human rights in the country.

The High Commissioner’s report was submitted to the Human Rights Council under article V, paragraph IV, of the agreement between the High Commissioner and the Government, with particular emphasis on institutions, enhancing the rule of law, the fight against impunity and security policies in a context of violence and insecurity, the situation of human rights defenders, indigenous peoples, women, and economic and social rights.

Ms Bachelet introduced her report on Honduras (A/HRC/49/21), describing the human rights situation monitored from 1 January to 31 December 2021. The report is based on the information collected and analysed by the OHCHR on the ground and through information provided by state authorities. It also includes information provided by civil society, victims, and other stakeholders.

The High Commissioner reiterated her commitment to support Honduras in strengthening the protection of human rights for all people and urged the authorities to implement a number of recommendations, including the implementation of a criminal policy with a human-rights-based approach, the improvement of the independence of the judiciary, the protection of women and girls from gender-based violence and the guarantee of the rights of LGBTQI people. 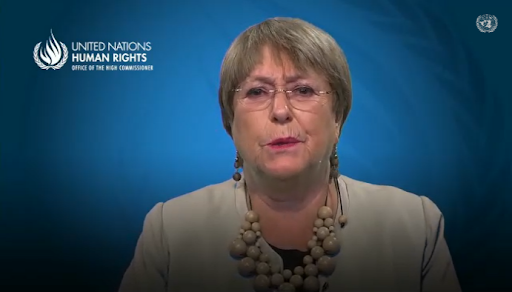 Ms Bachelet expressed her concern over the deepening poverty, inequality, impunity, and corruption, as well as the ongoing discrimination and high levels of violence that marked the country in 2021. She highlighted the increase in poverty rates in the country from 64.7% in 2019 to 73.6% in 2021. She stated that the Covid-19 pandemic also played a big role in worsening access to formal education, with 41% of school-aged children being left out of the education system due to the lack of digital resources.

However, the high participation rate in the elections of 28 November 2021, which for the first time brought a woman to the presidency of the country, was welcomed and acknowledged. Nevertheless, the High Commissioner regretted the pre-election violence, involving 69 incidents that left 30 dead. Consequently, she emphasised the need to hold perpetrators accountable for these human rights violations and abuses.

Ms Bachelet called on the authorities to strengthen the rule of law and democratic institutions. She deplored the killings of 318 women and 28 members of the  LGBTQI community recorded by her Office and called for prompt and thorough investigations. She also condemned the attacks and threats against 302 human rights defenders and journalists, ten of whom were killed in 2021.

While welcoming the verdict in the murder trial of renowned Honduran environmentalist Berta Cáceres, she expressed concern over the lack of judicial independence and access to justice for victims in other human rights cases. She urged the government to improve policies aimed at strengthening the protection of all human rights defenders. Ms Bachelet contended that corruption in Honduras remains a serious structural problem. She emphasised that recent legal reforms, such as Decree 93-2021, which facilitated the release and acquittal of several former officials accused and convicted of corruption, contributed to the undermining of the rule of law. The High Commissioner also spoke about land disputes between extractive companies and local communities, leading to attacks on environmental defenders and forced evictions.

Statement by the Honduran delegation 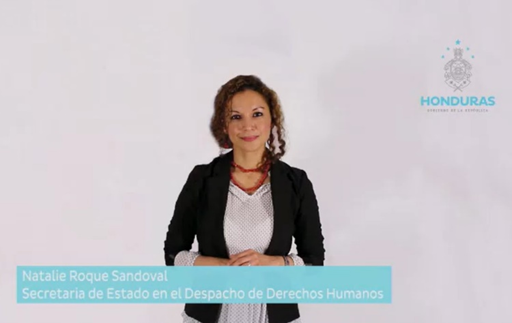 The delegate of Honduras reaffirmed the commitment of Xiomara Castro, newly elected President of the Republic of Honduras, to the protection of fundamental freedoms of the rights of women, human rights defenders, migrants, stigmatised people, and those who have suffered systemic human rights violations. It was stated that all government proposals and actions would be based on the promotion of human rights.

The delegate revealed that numerous political prisoners had been released from prison in light of the President’s obligations under human rights law and by the issuance of a new decree via the National Congress that has begun to dismantle the process of political persecution. The Honduran Government expressed extreme concern over the lack of accountability of companies who are responsible for violating fundamental rights of Indigenous Peoples, specifically, with a focus on the responsibility of reparation to the victims of the project known as Employment and Economic Development Zones (ZEDE). This initiative was strongly condemned as it poses a significant threat to the right to free, prior and informed consultation of indigenous and Afro-descendant peoples and the right to equitable and sustainable development.

Lastly, the Honduran representative emphasised the government’s commitment to seeking out the truth and ensuring justice, inspired by human rights activists and defenders, Berta Cáceres and Archbishop Óscar Arnulfo Romero.

Geneva International Centre for Justice (GICJ) welcomes the OHCHR’s report on the human rights situation in Honduras and hopes it will encourage the newly elected government to protect and be the guarantor of fundamental freedoms of all Honduran citizens. GICJ also urges Honduras to focus efforts to reform and strengthen the institutions responsible for providing public security in order to ensure the eradication of corruption within its governmental bodies. Regarding matters of business and compliance with human rights, GICJ encourages Honduras to adopt the necessary practices to ensure that business projects are developed with full respect for the rights of vulnerable indigenous communities.

We also see the implementation of public policies, to achieve the full realisation of economic, social, and cultural rights, with special attention to people in situations of vulnerability, and in particular to mitigate the consequences of the pandemic, the increase in poverty and the structuralism of inequality as necessary. We call upon the Honduran government to adopt urgent measures to bring national legislation in line with international human rights standards to promote and protect civic space. We also encourage the prevention, investigation and punishment of human rights violators and perpetrators of crimes against women, LGBTQI people, indigenous peoples, Afro-Hondurans, journalists, and human rights defenders.