By: Hannah Mulhern and Razan al-Shammari/GICJ

18 years have passed since the invasion of Iraq by American and British forces. For just shy of two decades, Iraq have experienced widespread devastation and destruction in the wake of coalition invasion and the occupation that followed it.

This devastation has taken many forms; torture, enforced disappearances, and extrajudicial killings have all caused massive human losses, and masses of internally displaced persons. The damage caused by the invasion has also resulted in far reaching and pervasive health issues,  which are still visible today. Further, a sectarian quote system, or ’Muhasasa’, was introduced by the occupying power, which was fundamental to the country's instability. The imposed system resulted in government policies which promoted violent sectarianism and consequently contributed to the worsening political and social situation in Iraq. This continues to pose major threats to democracy in present day Iraq, where a climate of impunity has given space to the militias to expand their grasp of control.

There is no doubt that the invasion and occupation have left Iraq in a vulnerable and precarious state. The consequences will be discussed in more depth in the sections to follow.

For 18 years, since the brutal US invasion of Iraq, Iraqi civilians have been subjected to the most hideous crimes. Young men and women were brutally tortured and humiliated. The well-known Abu Ghraib prison, near Baghdad, became the main place for the detention of Iraqis, in which savage acts of physical and mental abuse were carried out.

In the post-occupation years, Iraq has witnessed an increase in victims being subjected to torture and ill-treatment, with total impunity. Grave human rights violations in Abu Ghraib prison still continue today as the corrupt government is failing to hold the perpetrators accountable. Moreover, the militias in Iraq has established secret detention centres, in which arrests and enforced disappearances are mainly based on sectarian grounds, with the worst methods of torture practiced in them.

Prior to 2003, Muslims, of all sects, and Christians had been living alongside one another peacefully. Even during various national crises in the last 1400 years, where state intuitions were non-existent, there is no evidence of damage or looting to Christian or Jewish religious buildings, or any event that sparked Christian’s to depart from cities for any reason. In Mosul, for example, the Muslim society welcomed Christians from neighbouring villages to protect them inside city walls during Iran’s Nader Shah’s attack in 1743. In essence, there was tolerance, and there were no difficulties with coexistence.

The principle that came to dominate Iraq post-2003, the Muhasasa, was, for the most part, developed in the 1990’s. However, this principle returned to favour when the US was considering their principal visions for Iraq. These visions were, nevertheless, based upon assertions that were not in line with reality. Whilst Iraq had been previously undivided along ethnic and religious lines, the U.S had perceived quite the opposite. They played a major part in the sectarianization of the country’s political field, and rather than working alongside divisions previously existing, they instead created them.

The people of Iraq continue to demand justice for all the crimes committed against them since 2003. Geneva International Centre for Justice is unrelentingly appalled at the overall lack of accountability that has followed the invasion of Iraq. Over the years, we have called for many methods of justice to be initiated, in the hope that Iraq can, one day, heal from the wounds of occupation. 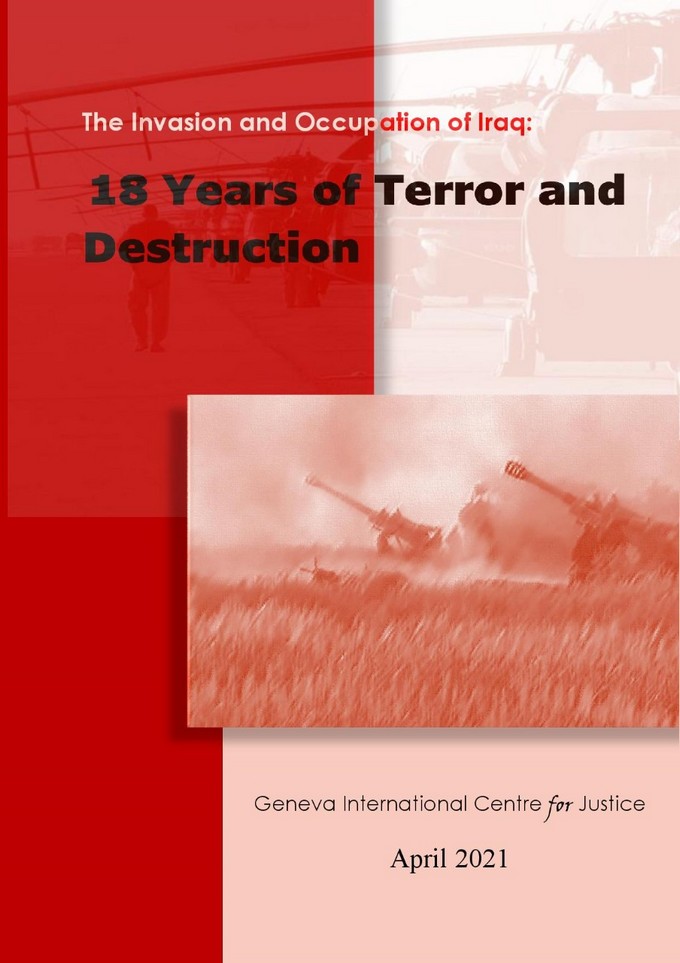