Iraq’s recent history includes two far reaching events, on the 2 August 1990 Iraq’s invasion into Kuwait and on 19 March 2003 the US/UK invasion into Iraq. Whether political leaders will draw lessons from these events will be, at best, questionable. Iraqis continue to be wronged. Danger to life and turmoil remain a cruel part of Iraq’s reality in early 2013. The collective suffering of a nation is visibly all pervasive. It can not be hidden.

The Iraqi puzzle of life confirms an endless number of tragedies:

Ethnic tension and sectarianism have become a major element in Iraqi politics since the US/UK invasion of 2003, a polarization of inter-group relations  Iraqis had not known before. This explains much of the existing hideous crime including murder, kidnapping, property destruction and,  most noteworthy, the deteriorating relationships between Baghdad and the three  northern Kurdish governorates.

Since the years of war, sanctions and occupation, Iraq’s once state-of-the-art medical system has all but  collapsed.  Malnutrition and diseases, almost forgotten in Iraq, such as respiratory infections; measles; typhoid fever and tuberculosis have re-emerged on a large scale. The planned  destruction of water and sanitation facilities , especially in the 1991 war,  and recurrent drug shortages, throughout the period of sanctions and after the 2003 invasion, promoted significantly  ill-being, morbidity and mortality in the country (WHO).

Depleted uranium, the armour-piercing radio-active munition,  and white phosphorus used by the US military in 1991 and 2003 have created serious health and environmental dangers in Iraq.  In early 2000 the US Government  sought to prevent WHO from surveying areas in southern Iraq where DU had been used. It also   rejected any causality with increases in lung cancer, leukaemia and congenital birth defects.  Fortunately   national and international   efforts have not deterred the collection of more evidence to show the  relevance of these war contaminants.

A 2009 Iraq Government mental health survey concluded that mass displacement, a climate of fear, torture, death and violence have contributed to the high ratio of mental illness in the country. It reflects what an old man in Mosul  observed: “ First they destroyed our economy and now they are trying to kill our minds.”

Iraq is said to have the third largest oil reserves in the world. Its current  oil exports nevertheless remain  below  the average export of  2.2 million barrels/day  Iraq was able to market during the  years of sanctions. Sabotage against pipelines, corruption,  inability to rehabilitate oil installations in the post-invasion era and Iraqi resistance  to handover oil exploration to foreign interests (PSAs)   are among the causes.

An immensely oil-rich country but  22.9% out of the est. 33 million Iraqis have been  living in poverty  and many more have to survive under near-poverty living conditions. The GNI per capita/annum (2011) amounted to a mere $2.640   (WB).   Transparency International  classified  Iraq’s  public sector corruption among the highest in the world – ranking 169 out of 176 countries (2012).

Rahim Hassan al-Uqailee, as head of the Iraqi Commission of Integrity wrote in an open letter to the Iraqi parliament’s anti-graft committee (2011): “The fight over stealing the money of state and its property is the unspoken part of the struggle for power in Iraq today.”

Despite the despicable gap between the rich and the poor, the Iraqi authorities  signed a deal (2011) with the US Government for the purchase of  18 F-16 fighter jets at a cost of $ 3 billion! At that time almost a quarter of the Iraqi population lived in poverty  and  the unemployment rate  exceeded 28% (UN). 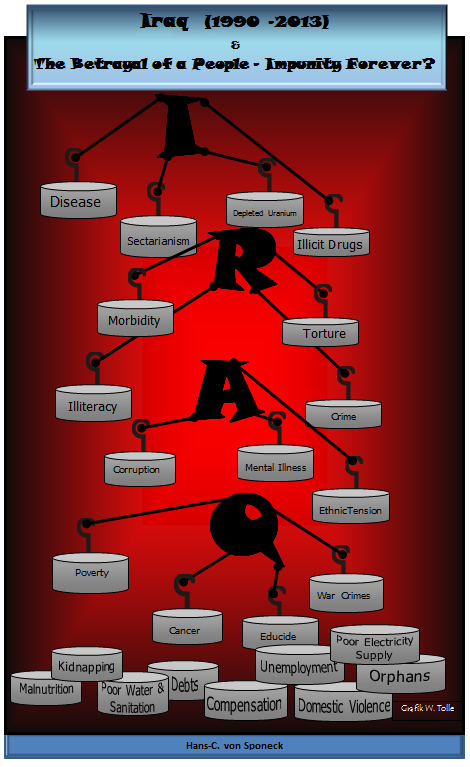 A World Bank/Government of Iraq  survey (2007) showed that  “almost 23 percent of Iraqis were illiterate”, 5 million school age children were not in school and gender disparity in education had become severe. There have been other serious developments in the education sector since 2003: a sectarian element has found its way into the school system affecting mostly Sunni and Shiite students  and, most disturbingly,   a  2011 Ghent University/Brussels Tribunal publication  states: “Iraq’s intellectual and technical class has been subject to a systematic campaign of intimidation, abduction, extortion, random  killings and targeted assassinations”. Conditions in Iraq  were  “reminiscent of  ‘educide’ or  genocide of the educated segments of Iraqi society”.

Other serious and life-threatening dangers  have confronted  Iraqis in recent years:

“…since the US-led invasion in 2003, Iraq has become a transit point in the flow of hashish and heroin from Iran and Afghanistan”, according to the UN. The Iraqi Ministry of Health confirms that local “addiction rates are climbing steadily” while before  drug use was not an Iraqi problem.

During the 13 years of sanctions and beyond, it was difficult to obtain building materials for the construction of additional housing. This resulted in a steep rise in overcrowded accommodation which in turn promoted domestic violence, often involving women as victims. A UN report  estimates that “one in five women in Iraq suffer from domestic abuse”.

Wars and violence have fundamentally changed the demographic and social profile of Iraq.

Iraq’s Ministry of Labor and Social Affairs indicates (2011) there are an estimated 4.5 million Iraqi children who have lost their parents - a horrific 14% of Iraq’s population are orphans! 70% of these children  became orphans since the 2003 invasion. Around 600,000 of these are living in the streets and a few in the 18 orphanages that exist in the country, we are told. In the  Iraq tradition, it must be remembered,  there was no need for orphanages. The extended family took care of those who had lost their parents.

Dictatorship, wars,  sanctions and crime  have changed  this.

There are an estimated one million female-headed households in Iraq. Most of these women are widows, victims of armed conflict and sectarian violence (ICRC/2010)

Apart from extreme physical, mental, economic and social damages, Iraqis have also faced a grim reality of punitive financial limitations during the years of sanctions. From 1990 until 1996, the year when the Oil-for-Food Programme (OFFP) became operative, all of Iraq’s foreign accounts were frozen and oil was not allowed to be sold internationally. The Iraqi people were almost  entirely dependent on meager help from abroad – a far cry from a dignified survival.

The OFFP (1996-2003),  allegedly a “humanitarian” exemption but fully financed (!) with sanctions-limited Iraqi oil money,  was little more than an  underfunded supply programme. Out of a  total oil income of $64 billion   about $ 19 billion  were transferred to the UN Compensation Commission (UNCC) in Geneva. At that time Iraq’s child mortality  of 130/1000 was among the highest in the world. This transfer to the UNCC was to compensate individuals, companies and governments, especially the Government of Kuwait, for claims resulting from Iraq’s invasion into Kuwait. Had there been any moral leadership in the UN Security Council, much of this compensation could have been postponed. It would have prevented many deaths among Iraqi children!

During 6 ½ years,  only $ 43 billion were available to meet the needs of   of  23 million Iraqis – a pittance! Out of this amount only $28 billion* were actually utilized for this purpose. Micro-management and extreme bureaucratization of the OFFP by the UN Security Council and also the deliberate blocking by the US & UK of much needed supplies for the people of Iraq were main causes.

The UN humanitarian programme was not meant to work!

The end result: the per capita value/ day of humanitarian goods actually benefitting Iraqis amounted to 51 US cents – a shameful reality for which the US & UK Governments were largely responsible.

As of October 2012 Iraq has paid $ 38.7 billion in compensation to the three parties identified above. The rightful demand  by Iraqis to-day that time has come to  obtain in turn their reparations from abroad for  war devastation, air, water and soil pollution,   destruction of farmland, physical infrastructure, water, sanitation and electricity facilities  to date has been ignored by the international community.

This  constitutes an intolerable and unacceptable double standard.

In March 2003, at the end of the Government of Saddam Hussein, Iraq’s total debt burden was identified as between $ 50 to $ 80 billion. The 19 Paris Club members, mostly European,,  identify an Iraq debt to them of $38.9 billion. Iraq’s other creditors are  primarily  Arab (GCCC) countries.

Detractors of   the evidence of willful destruction of Iraq’s heritage, its culture, the  artifact pilferage; the gross violation of national and international law; planted dis- and mis-information;  crime; brutality; disregard for fundamental human concerns and   ethical standards,  will either reject these accusations as preposterous, ideological and stupid or remain mute. Pitiful as this is they  have no  more to offer! In the name of democracy they  insist that the infamous “bigger picture”, their bigger picture, justified the means.

They do not understand what democracy and humanness really entails. It is not about potato chips and coke but about human security and the opportunity to shape one’s life in freedom from want and freedom from fear.

Iraq, a major  owner of global oil and gas,  should have no problem in giving its people such a life. Instead Iraq has become a failing state vying with other disadvantaged countries such as Afghanistan, Somalia and, of course, the State of Palestine, for the crown of misery.

The overall impact of these elements on life in Iraq constitute an indescribable human drama. Perpetrators, however,  will not be allowed to lean back for ever and assume that their crimes will simply disappear into the far horizon of nowhere. Accountability will prevail.

The efforts of the Kuala Lumpur War Crimes Commission (KLWCC) founded in 2005 by Tun Dr. Mahathir, Prime Minister of Malaysia from 1981-2003 are a step in that direction. The Commission has  worked for  many years  to produce an impressive body of  evidence from legal documents and victims testimonies.  This material, carefully reviewed by the Kuala Lumpur War Crimes Tribunal, allowed the Court to pronounce in November 2011 and in May 2012  that culpability exists at the highest levels of government in the United States and in the United Kingdom for war crimes and the crimes of torture. This can not possibly  come as a surprise  for George W. Bush and Anthony Blair!

The Tribunal’s verdict: the two leaders and their senior advisors had committed serious crimes against peace “in that they planned, prepared and invaded the sovereign state of Iraq in violation of international law and committed crimes of torture and war crimes, ignoring the Geneva Conventions and the UN torture law.”**

What one has seen can not be unseen! How much can a people take?

2013  must become  the year during which these perpetrators  will see an end to their impunity. especially those who were instrumental in creating decades of Iraqi suffering.  Due process must be for everyone, Iraqi and non-Iraqi; facing justice, however, is not   just for those who lost!

The  international public, as the ‘power from below’, will intensify its efforts during this tenth year after an illegal invasion into Iraq,  to reassure the Iraqi people that they are not alone in their search for redress.