Towards accountability and justice 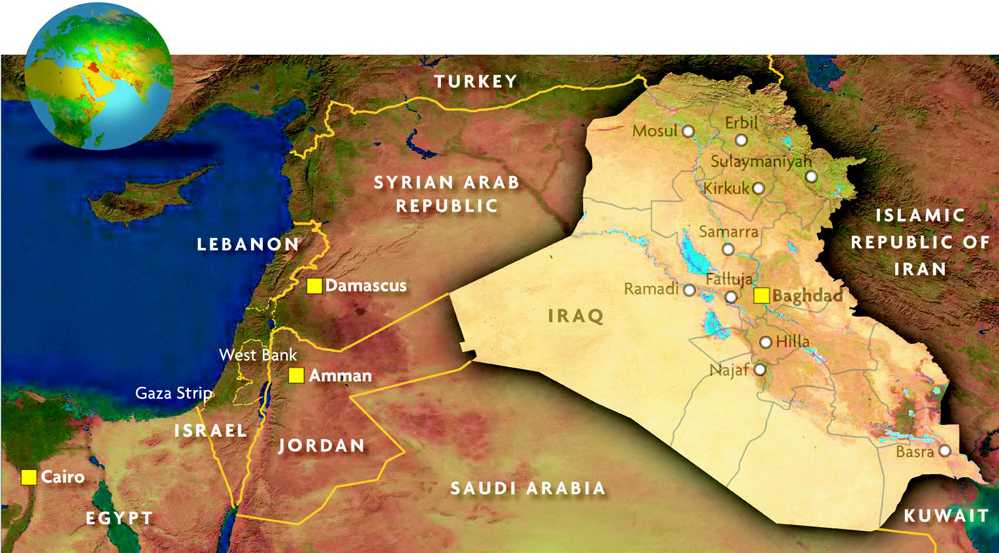 Iraq’s recent history includes two far reaching events: the UN sanctions imposed on the country in 1990 and the 2003 US invasion and subsequent occupation. These two events had an enormous impact on the lives of millions of Iraqis and ultimately brought the country to the absolute chaos it is witnessing today. For these reasons, GICJ thinks that it is essential, as well as owed to all those civilians who paid the price of such irresponsible actions, to document and investigate into these events, with the goal of achieving accountability and ultimately bringing justice to the people of Iraq.

The economic sanctions imposed on Iraq in 1990 were the toughest and most comprehensive sanctions in history and seen by many as a faulty punitive measure in clear violation of international law. Although multiple voices such as The Campaign Against Sanctions on Iraq (CASI)* aimed to raise awareness of the effects of sanctions on Iraq and advocated on humanitarian grounds for the lifting of non-military these sanctions remained in place for eleven years.

The USA and UK primarily had been most vocal in maintaining sanctions. The immediate consequence of the sanctions however was a dramatic fall in living standards, the collapse of infrastructure, and a serious decline in the availability of public services. In marked contrast to the prevailing situation prior to the events of 1990-91, the infant and child mortality rate rose to among the highest in the world and some voices went so far as to marking charge of genocide.

March 20, 2003 marks another dark milestone in the history of Iraq: in a clear breach of Article 2 (4) of the UN charter accompanied by grave violations of the 1949 Geneva Conventions and the 1977 Protocols, the United States together with the so called “coalition of the willing” started a war against Iraq with an initial operation, under the name of “Shock and Awe”, consisting in a serious of devastating airstrikes on Baghdad that aimed at attacking Iraqi command structure and destroying it in the shortest time possible by the use of overwhelming power which would ultimately paralyze the country’s will to fight back. That night marked the start of a devastating occupation that was due to change the face of Iraq forever.

Years have gone since the 2003 invasion by but the destruction is still present. Human Rights and social justice have deteriorated on all levels and the condition of the country's infrastructure remains dire. Malnutrition and diseases have re-emerged on a large scale. Ethnic tensions and sectarianism have become a major element, arbitrary arrests and torture have become systemic and execution rates have risen to record heights.

Today, the population of Iraq is still paying a high price for the brutal invasion and occupation: besides the almost 3 millions of Iraqis who died during and after the war, millions currently live under the poverty line and the number of orphans who live in the streets has exponentially increased. The invasion has also caused huge amounts of internal and external displacement, making Iraq one of the top 3 migratory countries. IDPs often live in extreme poverty and are unable to satisfy even their most basic needs.

Equally unnoticed goes the plight of those millions of widows who have lost their basic rights and have been left alone in providing for their families while the unemployment rate was on the rise. The situation of Iraqi people is so devastating that it has reached the levels of a humanitarian catastrophe under all points of view.

Further to the killing, displacement and deterioration of the economic conditions of Iraqi people, the invasion and occupation resulted in the absolute destruction of what was once a developed country. The persistent bombing destroyed or permanently damaged thousands of private and public buildings, such as houses, hospitals and schools, shops and businesses, as well as leveling all main infrastructures. The consequences of such great destructive actions brought to the unavoidable deterioration of the public sector, particularly of the education and healthcare systems. These two fundamental services have been deeply compromised by the physical destruction of the existing facilities and equipment as well as the killing or displacement of their personnel. Today these systems are hampered by corruption and the lack of appropriate funding, as well as the ongoing conflicts across the country, do not pose the conditions for a restoration, thus undermining further the standards of life of millions of Iraqis.

Although the full scale of the destruction has become apparent, the people of Iraq are still waiting in vain for an official apology, for reparations to be paid or the perpetrators to be held accountable, however correctly acknowledge and address injustice, ending impunity and providing measures of satisfaction are the only means to keep up the moral authority of the international community, prevent future atrocities and create sustainable peace.

All responsible be held accountable

The international community has frequently condemned the invasion but until 2016 the responsible as well as the perpetrators of crimes have been granted immunity. Yet, society has the right to truth about past events concerning the perpetration of heinous crimes, as well as the circumstances and the reasons for which aberrant crimes came to be committed. Recognition however is only a first step which further leads to reparations. Reparations provide the material form of the recognition owed to an equal rights holder whose fundamental rights have been violated.

The US invasion and occupation of Iraq has produced a vast number of consequences, many of which have directly affected the most vulnerable of the population: innocent civilians, women and children. GICJ work with the United Nations includes participation in meetings on human rights issues, preparing and submitting reports on human rights violations; delivering oral statements; organizing side events and conferences, bringing cases of special concern to the attention of the competent bodies as well as organizing human rights trainings.

In order to achieve maximum effectiveness GICJ is working in collaboration with an entire coalition of 300 NGOs, as well as multiple research centres and universities throughout Iraq and the world.

GICJ ensures that the documented cases of violations are brought to the international community’s attention through the use of all available mechanisms and methods. The organization regularly submits reports, joint statements and urgent appeals to the United Nations relevant bodies, such as the UN Human Rights Council (HRC), during their yearly sessions and meetings. Furthermore, GICJ sends letters to those prominent individuals who are responsible of tackling and addressing human rights issues, such as the United Nations High Commissioner for Human Rights and the appointed Special Rapporteurs, as well as those who are involved in the decision-making processes, such as governmental figures. It also organizes multiple side events on different topics throughout the year to raise awareness and provide an opportunity for different speakers to document and analyse human rights violations, starting by their personal experiences and knowledge.

Through such procedures, GICJ wants to make sure it has an effective impact on the international community, and, in particular on the United Nations HRC and relevant bodies, as well as all Member States who participate to these mechanisms, in order to alter the decision-making processes towards ones which fully comply with international law and human rights law.

Participation in the Human Rights Council 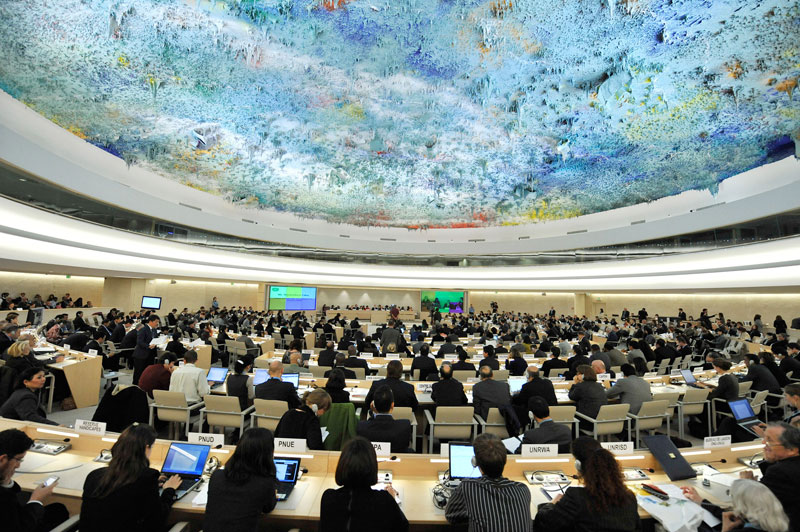 Side events at the UN are an excellent way to organize meetings of relevance to the work of the HRC. Such meetings are listed in the daily Bulletin of Informal Meetings and give the possibility to invite experts and visitors from inside and outside of the UN. GICJ regularly organizes side-events and conferences, hence informing about the situation in Iraq.

Human rights education and trainings can help to prevent human rights violations and conflicts, promote equality and development, and enhance people’s participation in decision-making. A better understanding of the work and mechanisms of the United Nations can further help NGOs and Human Rights defenders to better engage with the United Nations and hence lead to a real difference on the ground. To these extents, GICJ has given the opportunity to many Iraqi organizations and individuals to learn how they can engage with the human rights mechanism and get their voices heard, by involving them in activities and enabling them to develop their abilities in documenting and presenting reports and cases of violations. GICJ very much relies on the inputs of such people and engages in daily communications with them to make sure violations do not get ignored.

Your contribution will make a difference

GICJ documents human rights violations that took place in Iraq and reports them to the concerned bodies of the United Nations such as the Human Rights Council and the UN Special Procedures. The aim of this process is to ensure that all human rights violations in Iraq during the sanctions and the invasion and occupation be investigated by an international independent body as a step to achieve justice for victims through all possible legal means and to prevent impunity for the perpetrators and stop similar violations.

In order to allow GICJ to cover personnel, equipment, material, communication and reporting expenses and to remain independent you may consider a donation. Even the slightest contribution will make a difference.

Please feel free to contact GICJ any time under our email address This email address is being protected from spambots. You need JavaScript enabled to view it. or by phone/ fax +41227881971.

If you would like to help with a direct contribution to Geneva International Centre for Justice:

Read more on GICJ activities related to the human rights situation in Iraq: