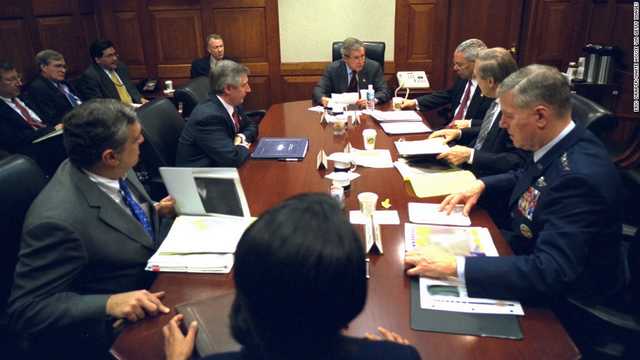 During the Cold War, the US and the Soviet Union competed for areas of influence in the Middle East. In the process, they often rode roughshod over the region’s interests and placed countries at the mercy of their global balance of power.

This legacy is perhaps nowhere more visible than in Iraq, where the Soviets imposed their will through armed branches of the Communist Party. Its ideology, however, did not sit easily with many Iraqis. And, in 1959, after an uprising against the military regime of Abd Al Karim Qasim, the opponents of communism struck back.

The Soviets’ myopic intervention had caused chaos. Iraqis were killing each other in the name of a foreign ideology, while the country’s natural resources were drained for the benefit of the Soviet Union.

By the 1980s, the strategy even turned against the Soviets and their influence in the region collapsed. Since then, the US has sought to do something all too similar in the region. In order to spread its vision of democracy, it declared a “war on terror”.

In Iraq, this strategy had devastating effects: the country was occupied, its secular constitution was destroyed and hundreds of thousands of civilians were killed by “shock-and-awe” bombings. Now, once again, Iraqis are killing each other, the country’s natural resources are being depleted at pace and a refugee crisis is in full flow — this time in the name of democracy. In response, many of Iraq’s radicalised young people have turned to extremist religious organisations — such as Al Qaeda and Isis — whose rise was aided by the consequences of American intervention.

The US must thus accept that its current foreign policy has failed and that its hope of dividing Iraq into three federal states ignored the political ambitions of the regional powers, most notably Iran, which has worked consistently to extend its sectarian plans: reinforcing its hold on Iraq’s civil, religious and military institutions and supporting Bashar Al Assad’s regime in Syria.

Turkey, on the other hand, has reignited its ambition to negate on the 1925 agreement with the British, in keeping with which the province of Mosul was carved out of Turkey to remain part of Iraq. Israel’s regional ambition is well served with a divided and weakened Arab world.

The collapse of Bashar Al Asaad’s regime would pose a serious setback for Iran’s sectarian plans for the region. Although this would bode well with Turkey’s plans. Iraq and Syria free of the menace of ISIS would signal the end of The Project for the New American Century to redraw the borders of countries in the region.

The recent terror targeting of France must therefore be seen as part of the struggle between the regional powers. To maximise their revitalised regional territorial ambitions in the absence of a powerful, sovereign and independent secular Iraq.

Russia’s recent military intervention in Syria should therefore be a wake-up call for the US. Liberated from their previous commitment to communism, the Russians may soon find a permanent political foothold as the perceived saviour of the Arab people; a shield from the tyranny of a destructive US foreign policy.

The US should instead work with Iraqi political groups to establish a government of national unity. Unless it does so, the outcome will no doubt be the same as that suffered by the Soviet Union. The US will be driven out and denied any influence or presence in the region. As Marx once put it, history repeats itself: first as tragedy, then as farce.