The international community speaks out against human rights violations in Iran. During a Special Session held on 24th of November 2022, the Human Rights Council adopted by 25 votes to 6 resolution A/HRC/S-35/L1.

In addition, this resolution denounces the regime’s response to the protests. It recognises the “deaths of at least 304 people, including 41 children”, who participated in protests across the country. The Islamic Republic of Iran is urged to take all measures necessary to prevent extrajudicial killings, enforced disappearances, sexual and gender-based violence, arbitrary arrests and detentions, and torture against peaceful protesters.

Finally, recognising the attempt of the current government to limit freedom of speech, the Council underlined “the importance of maintaining free, open, interoperable, reliable and secure access to the Internet.

This resolution must be welcomed as a success, as a step forward in the respect of human rights. The international community has not only the right, but it also has the duty to use this mechanism to promote the rights of people worldwide, and in this specific case, to remind Iran of its obligations. Having ratified the ICCPR, Iran must ensure, among others, its people’s freedom of association and freedom of expression. 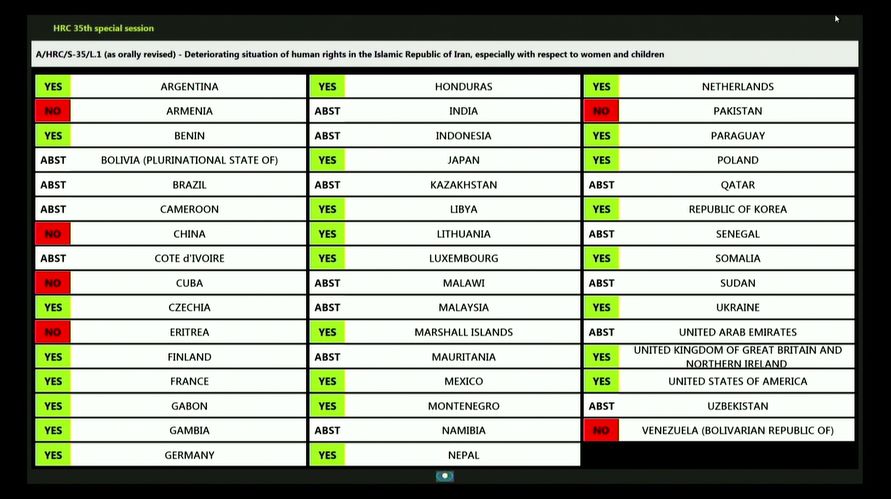 Amendment to suppress the purpose of the resolution rejected

A couple of minutes before the final vote, the People’s Republic of China orally suggested an amendment to remove the establishment of the Fact-Finding Mission from the resolution. The amended resolution would therefore only have condemned the human rights abuses without using the already limited Council’s full power to protect human rights.

Criticised for not having participated previously in the drafting of the resolution, the PRC still found some support. A small group of countries, among which a majority have a dubious human rights record, using a narrative well known at the Council. They urged the resolution to follow the principle of non-interference, accused other states of double-standards against countries of the global south, and highlighted a politicisation of the UN human rights mechanisms.

Yet, the Council did not fall into the trap. The issues raised in Iran were simply too big to ignore. More than 350 deaths. Arbitrary detentions of peaceful protestors. Record of gender-based violence and torture. Abusive use of death penalty. Today the Council had the duty to act, and it delivered. The amendment was rejected by 25 votes to 6.

Geneva International Centre for Justice firmly condemns the brutal oppression and linked human rights violations perpetrated by the Iranian regime, and we welcome the resolution passed that established the UN Fact-Finding Mission. We urge the current government of Iran to allow protests to continue. The demands of the citizens must be heard, and changes must be implemented to safeguard the freedoms and rights of the Iranians. GICJ recognises the Iranian struggle and we join our voice to theirs. Today we say Mahsa Amini, women, life, and liberty.