Adopted by the General Assembly in 1963, the United Nations Declaration on the Elimination of All Forms of Racial Discrimination outlines the body’s views on racism and calls on States to take direct efforts to consistently condemn racism and promote tolerance. Then, in 1965, the United Nations adopted the International Convention on the Elimination of All Forms of Racial Discrimination (ICERD) which is a legally binding document that commits its signatories to the elimination of racial discrimination and the promotion of understanding among all races. GICJ calls on all Member States to sign and uphold both of these international treaties in order to provide justice for discriminatory behavior. GICJ highlights that in order to respect every human being’s dignity, citizens must not only be held accountable for hate speech and discriminatory actions, but reparations must be given for any victims involved.

Racism has become a disease our world has failed to eradicate and until all countries uphold their duty to fight against racial discrimination in all its forms, racism will continue to thrive. Politicians too often foster a xenophobic climate by blaming immigrants for increasing crime rate and identity loss, despite evidence depicting no correlation. Racist discourse in politics is feeding into the public’s fear of migrants and the rejection of minorities within their society.

GICJ calls on the UN Human Rights Council to urge all Member States to condemn racial discrimination, continue to criminalize groups who preach racial superiority, and hold all citizens accountable for hate speech and discriminatory actions. Further, tangible steps for how States can hold accountable hate speech when committed by politicians and government officials should be provided. Lastly, the Human Rights Council needs to emphasize the importance for all Member States to implement the Durban Declaration and Programme of Action (DDPA) and promote the commemoration of its 20th anniversary in 2021. 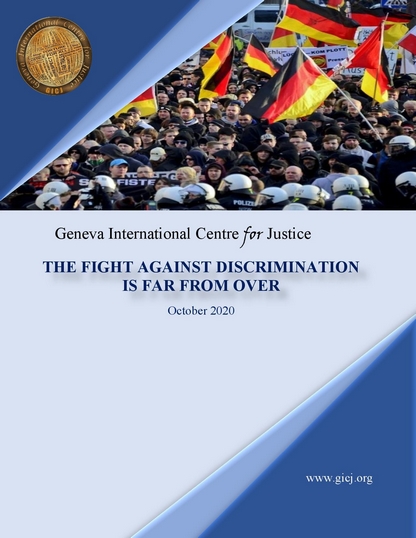 Read other GICJ reports on discrimination below: