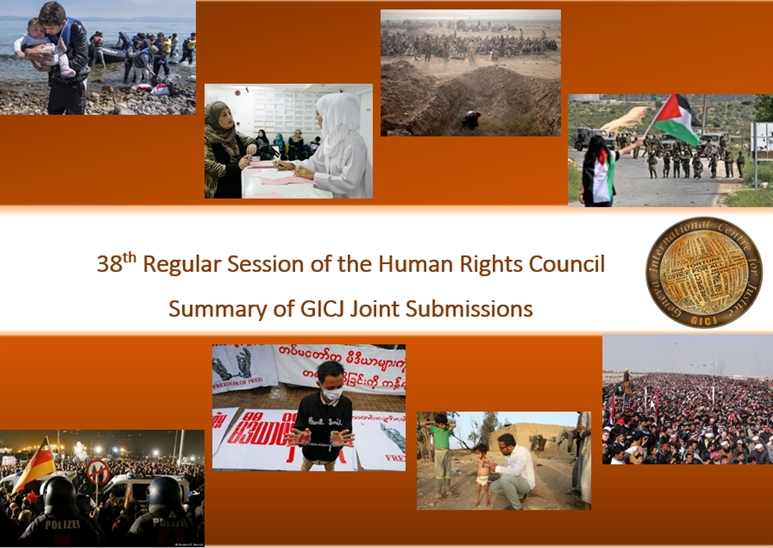 Geneva International Centre for Justice submitted eight jointly Written Statements with several signatories to the 38th Regular Session of the Human Rights Council. The statements covered a number of thematic in certain countries;

- Public Health of Refugees in Lebanon,

- Freedom of Expression and Association in Iraq,

- Freedom of the Press in Myanmar, and

- Racism and Xenophobia in Europe.

Each statement gave a description of the situation and the concerned human rights issues that the Human Rights Council should address; the statements also include recommendations for the Council and/or concerned countries.

Children in Yemen: the future of a whole generation is under threat 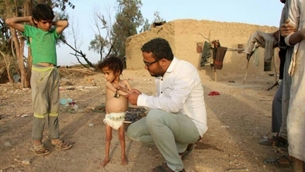 The Yemeni population has been living in an ongoing civil war for more than four years now and it is experiencing a grave humanitarian crisis. At the centre of this, children are one category of the population that is most vulnerable and affected by this ongoing conflict. In fact, they are facing several violations of their most basic human rights and are victims of different forms of violence. In addition, they are equally directly or indirectly affected by numerous violations of international humanitarian law which have been committed from all parties to the conflict. This statement wants to illustrate some of the ways in which this war is affecting some of their basic human rights, such as their right to education and health. The statement equally outlines two worrisome practices that are taking place in this context: child marriage and child recruitment.

Cancer: The Public Health Challenge for Syrian Refugees in Lebanon 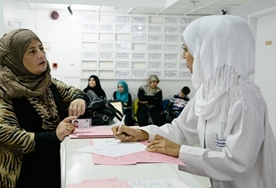 Since the outbreak of the civil war in Syria in March 2011, over 11 million Syrians fled their homes. The majority have sought refuge in neighbouring countries such as Turkey, Lebanon and Jordan. Over one million refugees have settled in Lebanon since the outbreak of the war, making it the country with the highest per capita concentration of refugees in the world. This large influx of refugees has exacerbated the political, economic and security challenges of the country. Furthermore, it has equally placed a considerable burden on the Lebanese health system. Due to irregular funding, many Syrian refugees have died of cancer. This statement aims to illustrate some of the mains challenges Syrian refugees are facing in terms of accessing to health care, such as no access to legal status and financial hardship. 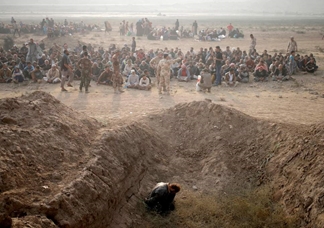 In Iraq, the number of executions continues to rise, even though article 15 of the Iraqi Constitution of 2005 encloses the right to life. With the adoption of the Anti-Terrorism law No.13 of 2005, Iraqi officials have a broad justification for implementing the death penalty and this resulted in the perpetration of numerous human rights violations, all under the pretext of combating terrorism. Furthermore, trials in Iraq are failing to respect international fair trial standards. The country has a weak judicial system, plagued by corruption, which frequently bases convictions on coerced confessions. This means that trial proceedings fail to meet international standards, allowing these executions to be based on discriminatory and sectarian motives – putting the lives of many innocent people under threat. The death penalty and extrajudicial executions in Iraq are used as tools of political repression, to eliminate political opponents, and to maintain a reign of terror over the Iraqi population at large.

Freedom of Expression and Association in Iraq

The freedom of expression and association are vital in any well-functioning political system and should therefore be protected at all costs. These rights are established in article 19 and 20 of the Universal Declaration of Human Rights and article 19 and 21 of the International Covenant on Civil and Political rights. 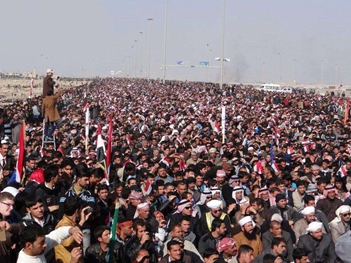 Both of these treaties are signed and ratified by the Iraqi government and thus the country has an international obligation to comply with these rights. In Iraq however, these freedoms are often not respected. There are numerous cases of violence used against peaceful protestors and kidnapping of activists, journalists and demonstrators. During and after the occupation of Iraq, Iraq became the most dangerous place for journalists. But even the defeat of ISIS does not keep journalists of fearing for their lives. Furthermore, it has become a trend that every protest in will end in violence. Moreover, the ruthless attacks against the peaceful civilian demonstrators by government forces are in serious violation of a number of fundamental human rights. The Iraqi government has proved unable, or unwilling, to ensure protection and to respect the fundamental rights of its citizens. The climate of impunity surrounding these illegal practices, including attacks against civilian properties and abduction of journalists and human rights defenders, perpetrated by governmental forces must end. 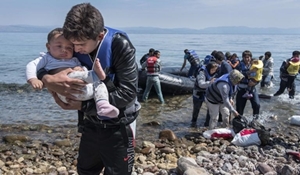 GICJ jointly with other organizations submitted a written statement on the incorporation of the EU Asylum Directives in Greece, Italy, Malta and Cyprus, namely the countries which constitute the main points of entry of asylum seekers in Europe. The two EU Directives aim at establishing common procedures for the reception of applicants for international protection and for granting and withdrawing international protection.

The full and correct incorporation of the Directives in the national legal orders of the South-Eastern EU Member States constitutes an imperative need and the undersigning organizations urge that more action is taken immediately towards this direction. To this end, the signing organizations made recommendations to the Special Rapporteur on the rights of migrants as well as the States concerned.

Myanmar: Freedom of the Press should be Urgently Restored

GICJ jointly with other civil society organizations brought the topic of freedom of the press in Myanmar to the attention of the Human Rights Council. The Myanmar government maintains tight control over the media sector through the use of harsh defamation and other laws. Authorities are increasingly abusing various draconian colonial and military era laws to repress reporting on a widening range of topics. The media landscape is marked by the delay of legislative reforms, and the increasing use of litigious tactics to hamper media freedom, while journalists are constantly being arrested and prosecuted. 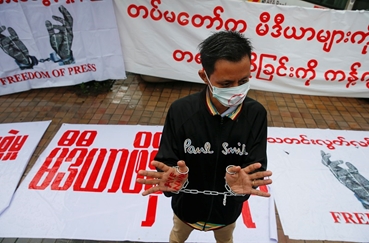 The government's repressive focus now is on censoring coverage of western Rakhine State, from where over 680,000 Rohingya Muslim refugees have fled military violence into neighbouring Bangladesh since August 25 last year. Most –if not all- journalists feel discouraged to remain in the country and continue reporting on the ethnic cleansing taking place against the Rohingya.

GICJ submitted that the prosecution and threats against journalists hampers the unveiling of the truth regarding the Rohingya crisis and the transition of Myanmar to democracy. There is an imperative need that freedom of the press is restored immediately and journalists be provided the opportunity to investigate the crimes taking place. 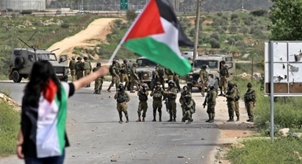 In recent years, the human rights situation in Palestine and other Occupied Territories have continued to deteriorate. Additionally, measures taken and activities administered against the people of Palestine indicate that a peaceful resolution to end the conflict is slipping away.

The serious situation of human rights in the Occupied Palestinian Territories has been long-standing and the recent attacks against Palestinian protesters is not a one-time account. While it should not be taken lightly and is a serious offense by the perpetrators, it should serve to shed light on the occupation of the Palestinian territories by the state of Israel as a whole. The treatment and denial of rights such as the right to life, right to health, right to peaceful assembly and association, and the right to a nationality and family life among numerous others deserves the full attention of the Human Rights Council and the international community at large.

Growing Racism and Xenophobia in Europe

In the past decade Europe has undergone economic and political crises and has experienced significant increases in migrants, especially refugees and asylum seekers. This is an important phenomenon to realise as blame for these crises and ensuing situations unjustly fall on minority groups. In addition, violent 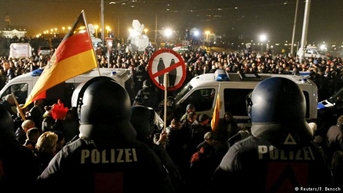 extremists who are on the rise have committed acts of violence and have sought to unrest societies and communities in Europe. However, the concerning responses to this phenomenon and towards hostile acts have been regrettably directed in the wrong directions by both civilians and politicians alike that has resulted in unfortunate circumstances and negative stereotypes.

In addition to race-based violent attacks, hate speech and verbal slurs discrimination is still a serious issue in economic, social and political fields such as housing, employment, health services, education, political participation and criminal justice among others. Moreover, the media is continuously being exploited to spread xenophobia, stereotypes, and untrue claims. Politicians, journalists, and opinion-makers have a crucial part to play in not only exposing racial hatred and discrimination but also in promoting diversity and respect for human rights against racism as emphasised under several existing conventions and resolutions.