Geneva International Centre for Justice (GICJ) with International Organisation for the Elimination of All Forms of Racial Discrimination (EAFORD), and International-Lawyers.Org organised and participated in a side-event at the Thirty-Eighth Regular Session of the Human Rights Council. The event took place from 14h30 to 16h00 on 28th June, 2018 in Room XXVI at the Palais des Nations. 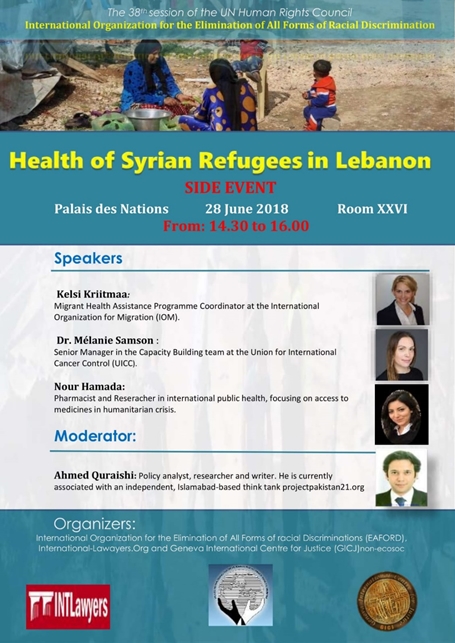 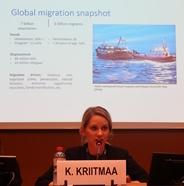 The first panelist Kelsi Kriitmaa began the discussion by noting that there is no doubt today for the international community the right to health for everyone is of utmost importance since it crucially impacts the development of all countries and is actually part of the 2030 Agenda for Sustainable Development “Goal 3: Good health and well-being”. However, universal health coverage will not and cannot be achieved without ensuring health to refugees. This is an opportunity to get rid of discrimination in health and to make health systems more inclusive as well as adaptable.

In addition, as well noted by Ms. Kriitmaa “we do not want to stigmatize migration in itself. Refugees are people who have been forced to flee owing to a well-founded fear of being persecuted for reasons of race, religion, nationality, membership of a particular social group or political opinion. They are human beings fearing for their lives and have been victims of violence, war, organized crimes and thus it does not automatically mean that refugees are the ones spreading diseases as some claim. Rather, refugees are often caught up in dangerous situations especially when it comes to illegal migration including the dangerous situation of the total lack of medical care.

According to the speaker, illegal migrants face several challenges and threats to health such as congestion on boats, lack of access to services, exposure to traumatic events, lack of water and sanitation resulting in food-and waterborne infections, malnutrition, overcrowded camps, abuses, etc. The World Health Organization (WHO) reported no systemic association between migration and the increase of communicable diseases. “According to WHO’s report, exotic and rare viruses such as Ebola or MERS are more likely to be brought into Europe by tourists and health care workers than by migrants”.

For these reasons, the international Organization for Migration, the World Health Organization (WHO) and the UN Refugee Agency (UNHCR) published a document concerning the main challenges faced by refugees with health problems. First, the access to health facilities, second the access to equitable distribution of health facilities (goods and services), third the unavailability or inadequacy of essential drugs and lastly the participation of affected populations.

Access to health care for refugees is often restricted and exclusion from it is exacerbated by the undocumented status of many refugees and uncertainties about entitlements. Additional practical barriers impede access to health-care services for refugees and/or lead to delayed care—eg, inadequate information and awareness about the availability of services, insufficient financial means, restricted access to transport, culturally insensitive care, and inadequate provision of interpreters, etc.
The right to health is interlinked with other human rights and the principle of non-discrimination. There is a need to develop more effective approaches to respond to the health needs of refugees in host countries. As the global community moves towards its ambitious goals in the post-2015 sustainable development era, serious consideration should be given to the right of refugees to access timely, appropriate, and quality health-care services. 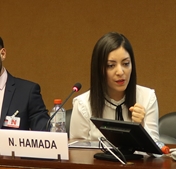 The right of access to health facilities, goods and services in a non-discriminatory basis is systematically violated, as demonstrated by the panel’s second speaker, Nour Hamada. The focus of her research during two years in Lebanon was on Syrian refugees affected by cancer. According to her, there are several complex issues and challenges faced by these vulnerable people. First, the unwillingness of the Lebanese government to provide refugees with a legal status prevents them from free movement around the country out of fear of getting arrested, imprisoned, or deported to the country of origin. It also means that even when feeling sick, they would still tend to abstain from going to the doctor. Hence, some migrants end up finding out they have a late stage cancer too advanced to cure. The second challenge focuses on the financial hardship of migrants, which interlinks with the first challenge of the lack of legal status. Considering that without a legal status, migrants do not have access to the marketplace and are fully dependent on international aid. It becomes extremely difficult to find a job and even when some manage to get one, they are poorly paid, which explains why 58 percent of Syrian refugees in Lebanon live in extreme poverty with less than US$ 3.00 per day per person.

The living conditions are worsening by the day considering the Lebanese government’s decision to cut funds stating “the Lebanese government does not have the budget to treat non-Lebanese people”. More than that, many Syrian refugees live in informal settlements on private lands in wood and plastic tents with no lights and no heat. Every person that is being kept without legal status and that suffers from a health condition might become a bigger burden on the health system later on (due to progression of the condition). It is therefore of crucial importance to provide refugees and migrants with a status that will allow for full access to the health system. 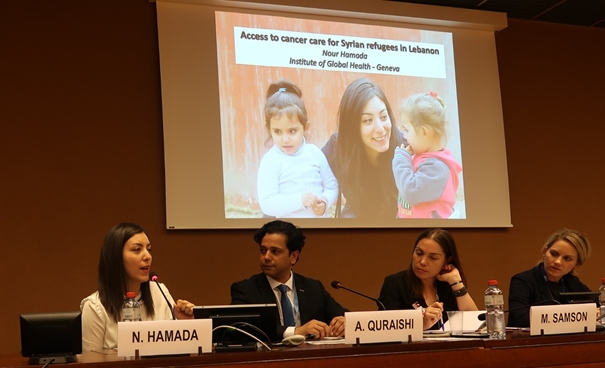 It has become even harder for Syrian refugees to access health care services considering the lack of alternatives where new anti-refugee and immigration policies led to confusion and despair in the global refugee crisis at its highest since World War II. Some Lebanese officials are even pushing for speedy returns, but the UN and human rights groups say conditions are still not safe in Syria. Many refugees do not want to return without international guarantees. There should be a better international response to help policy makers and host countries effectively respond to these challenges with strong action at the global and national level. 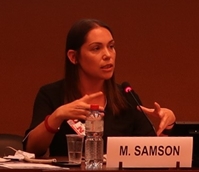 The last speaker on the panel, Dr. Melanie Samson, is a Senior Manager in the Capacity Building team at the Union for International Cancer Control (UICC), which exists to help the global health community accelerate the fight against cancer. As part of the “Global Cancer Control Agenda” and UICC’s “Treatment for All Campaign”, she addressed three areas of focus.

According to Dr. Samson, cancer is one of the top ten causes of mortality in low and middle-income countries. UICC estimates that the most common cancer type among Syrian refugees in Lebanon is breast cancer – often diagnosed at an advanced stage. In Lebanon, due to the large number of Syrian refugees, the breast cancer incidence is reportedly +37.6%” higher which is an alarming figure that pushed UICC to develop a plan of action known as the “Treatment for All” plan. The purpose is to reduce these numbers based on the following pillars: improve cancer data collection for public usage, access to early detection and diagnosis, timely and accurate treatment, supportive and palliative care.

Investing in cancer control, from prevention to treatment and care, can bring about important changes in disease burden by reducing cancer-related illness and death of migrants and refugees across the globe. It is estimated that increased annual international funding of USD 18 billion globally on prevention, earlier detection and improved care for cancer patients could save three million lives per year by 2030 - and many more in the decades beyond.

Advocacy for cancer control is a strategic process that is designed to influence governments, decision makers and other key stakeholders through the effective use of evidence, to reduce the global cancer burden, to promote greater equity, and to integrate cancer control into the world health and development agenda. 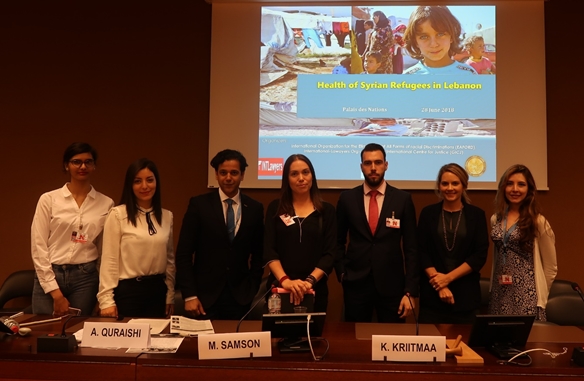