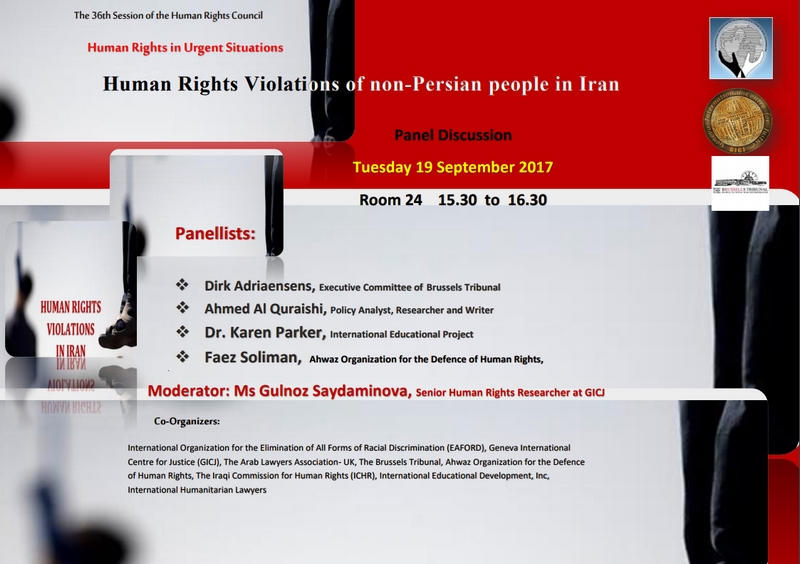 Ms. Gulnoz Saydaminova – Ms. Saydaminova is the Senior Human Rights Researcher at Geneva International Centre for Justice (GICJ) and has been researching and writing on the situation in Myanmar focusing on the humanitarian crisis as well as the legal and political implications.

Mr. Ahmed Al Quraishi – Mr. Quraishi is a policy analyst, researcher and writer. As a journalist, he has worked extensively in Iraq, Pakistan, Lebanon, Syria, and the Gulf region, has worked for Aljazeera and authored articles in Arabic and English over the past 24 years. He is currently associated with in independent, Islamabad-based think tank projectpakistan21.org.

Mr. Dirk Adriaensens – Mr. Adriaensens is on the Executive Committee of the Brussels Tribunal, which is a renowned international network of intellectuals, artists, and activists who denounce the logic of permanent war promoted by the American government and its allies. He is also coordinator of SOS Iraq. He was also a member of the International Organizing Committee of the World Tribunal in Iraq (2003-2005). Mr. Adriaensens has co-authored several publications surrounding the US, Iraq, and crimes of war among many other related topics.

Dr. Karen Parker – Dr. Parker is a chief delegate for International Educational Development/Humanitarian Law Project. She is an attorney based in San Francisco and practices human rights law and humanitarian law and regularly testifies at the United Nations Commission on Human Rights in Geneva and its Sub-Commission on the Promotion and Protection of Human Rights. She has made considerable contributions to international law in areas such as economic sanctions, weaponry, environment as a human right, and the rights of the disabled.

Mr. Faez Soliman – Mr. Soliman represents the Ahwaz Organization for the Defence of Human Rights, which is a non-profit, non-governmental organization dedicated to the promotion and reinforcements to the principles and norms of human rights. Their mission is to defend the rights of the Ahwazi Arab people in south and southwest Iran and to stop human rights violations in Ahwaz.

Mr. Quraishi was the first speaker to take the floor and began the panel discussion by recounting an anecdote about the Ahwaz organization and how ethnic minorities in Iran felt threatened by the government and there was a struggle concerning this issue. He then gave some context by giving some background noting that Iran is not an integrated nation but it has many ethnicities and linguistic groups and the country is mainly ruled by clerics. 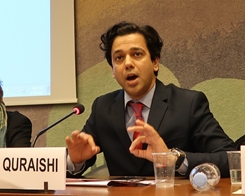 Mr. Quraishi said that we have to talk about the role of Iran as it is an emerging country but the social and political situation is moving towards instability, which will spread to the surrounding countries. The policies of the government are forcing the rise of issues pertaining to ethnic and linguistic minority groups. For instance, three decades ago a deliberate policy was enacted that militarized Shia citizens and arming neighbouring countries. Iran has militarized ethnic groups in Middle Eastern and South Asian countries including Pakistan, Malaysia, Yemen and Nigeria and even though they are not immediate neighbours with Iran, the latter's diplomats and diplomatic missions do have an impact.

He concluded by noting that the ruling family of Iran had reached out to the ruling family of Egypt and formed a relationship that led to a ruling monarchy. While the monarchy lasted Iran reached out to its neighbours without considering ethnicity and sect amongst other identifiable groups and integration succeeded to the greatest extent. However, divisions became sharper after 1979 and the open policy that was adopted is now coming back to haunt them.

The moderator, Ms. Saydaminova, noted that under international law minorities are protected and it is the government's responsibility to implement and protect minorities. The Declaration on the Rights of Persons Belonging to National or Ethnic, Religious and Linguistic Minorities declares that states should protect their existence and states should ensure the respect of minority groups and Iran is bound by these conventions.

The second speaker, Mr. Adriansens, focused on a broader issue and mentioned that there is a double role. Iraq has cooperated with the United States of America. This is key as there is a general geopolitical position that brings in a paradox where the US is the most important enemy, however, on the other hand the Iraqis are feeling the heavy hand of Iranian intervention in the country. He mentioned that according to a focus group the American strategy is a fixed one and they are playing divide and rule to create as much distraction as possible and on the other hand Iran is under attack by the US. 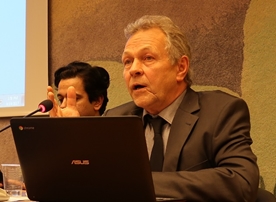 Referencing Mohamed Ali Abdahi, an Iranian theologian, the fall of Kabul and Baghdad would not have been possible without Iranian interference. The result is that the Iranian threat is now imminent and hence allies play a major role. He said that it is important to note the road through Jerusalem goes through Baghdad and it was clear to Saddam Hussein (former president of Iraq) that Ruhollah Khomeni (former supreme leader of Iran) would be an aggressive player in the region. Thus, the Shia was called upon to conduct a holy war. One must bear in mind that contacts with Israel continued after 1979 despite assurances that ties would be cut and they even obtained weapons and intelligence for Iran. Mr. Adriansens concluded by saying that it is strange that given this historical background and context Iran is regarded as an anti-imperialist country.

Dr. Karen Parker was the third speaker to take the floor where she talked about the Kurdish population in Iran. Iran has participated in the execution of many Kurdish people and in 8 months alone more than 50 Kurds were executed. The number, however, is likely to be higher than announced as families are kept under surveillance in the event that they may raise the issue thus putting themselves in danger. Many Iranian Kurds are in jail and have been for many years. The new Special Rapporteur (SR) who looked at the situation of Kurds for the first time was still unable to stop the victimization. Hopefully, the new SR will take and play a larger role in ensuring and protecting the rights of the Kurdish people in Iran.

In June 2017, she said, Iran saw a new phase of training. The government decided to put focus on the drug trade as there is a huge increase in the use of drugs among the Iranian youth as they are being provided with drugs. 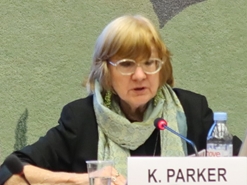 This warrants more arrests and detentions. Additionally, in terms of protesting discrimination a number of Kurdish student activists have been killed. Dr. Parker concluded by saying that this is clear demonstration that the Iranian regime has maintained its power over the people and there is practically no free press or freedom of association. The most serious situation, however, remains with the number of executions that are being carried out. In light of this she said that the Human Rights Council needs to be pressured to into appointing a new Human Rights SR on Iran.

The moderator pointed out that when it comes to the death penalty Iran is one of the top executors.

The final speaker was Mr. F. Soliman who also brought up the Ahwaz region and said that even a smidget of the crimes committed and the suffering of non-Farsi people in Iran would shake the world. It is thus our duty to bring human rights to those who need it. 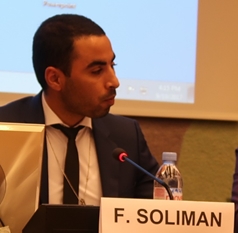 What is perplexing, he said, is that after the deal with Iran there is more violence with full impunity. Recently there have been executions of human rights defenders and women activists and many are deprived of the right to education and the right of access to a lawyer or legal assistance. Furthermore, there have been calls to investigate allegations of heinous treatment and torture against prisoners and even against political activists and those who have been exiled. These are all violations of the UN Charter and the United Nations Organization for Education, Science and Culture (UNESCO). He said that it is only with hope that the court will do its due part. One has to consider the detainees and all those whose human rights’ have not been ensured.

In addition to the crimes mentioned there are crimes on the environment as water is being polluted and is scarce, which creates a worrying situation as it is needed for nutrition and agriculture among many other uses. Moreover, the crimes against the environment have created desertification and lead to an increase in urban to rural migration.

Mr. Soliman went to say that the Arab population is not welcome in the workforce in Iran that is now practicing ethnic cleansing and forced displacement. Each group suffers mistreatment and is blocked from the right to education in their mother tongue, religion of choice, the right to self-determination, political participation, and other rights such as establishing a non-governmental organisation (NGO).

Speaking on behalf of many, Mr. Soliman hopes that this Council will adopt an adequate resolution for Iran and reparations will be paid to all those illegally detained and those whose rights have been violated. The situation cannot improve unless they minorities have autonomy and the occupation of their lands should come to an end.

Round of questions and comments

An intervention was made by a person who mentioned that we do not hear any voices from international NGOs regarding the grave violations in Iran. They also touched on the issue of imperialism and sad that what Iran is doing is a lie with fake slogans. Additionally, there is a very strong relationship between Iran, Hezbollah, and Da’esh (ISIS). With this knowledge why then are international organisations and human rights groups silent on the role of Iran in creating and helping ISIS and other terrorist groups?

In response, the panel said that one has to take into consideration that Iranian clergymen are probably the smartest Mullahs ever. They have cooperated with Americans and other influential actors creating relationships and dodging scrutiny and this has to be commended. These groups succeeded and managed their diplomatic success.

Reports of the Side-event: