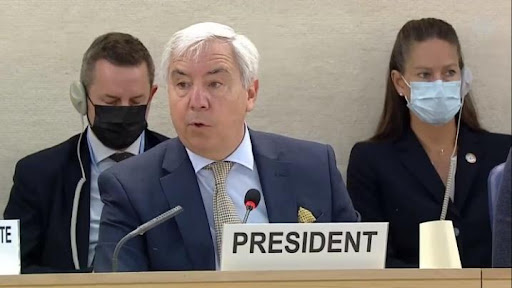 Ms Michelle Bachelet, UN High Commissioner for Human Rights, presented an oral update on the current situation in Ukraine following her previous update on the 30th of March. The High Commissioner emphasised that her office continues to verify violations of international human rights law (IHRL) and international humanitarian law (IHL) in Ukraine, many of which amount to war crimes. Ms Bachelet asserted that the daily updates of civilian casualties published by her office are, in reality, likely to be much higher and that these casualties are caused in a number of ways including airstrikes, the absence of effective medical care, and executions. The High Commissioner described the unimaginable horrors faced by those in areas such as Mariupol and Azovstal who have witnessed the destruction of hundreds of educational and medical facilities, as well as thousands of civilian houses. Ms Bachelet stressed that the only way to bring an end to the human rights violations that have resulted from the conflict was to cease hostilities. As such, she called for an end to the conflict and urged all parties to abide by their obligations under IHRL and IHL.

Victor Madrigal-Borloz, Chair of the Coordination Committee on Special Procedures, addressed the Council and noted that every day he and his colleagues receive information about the human rights implications of the Russian invasion of Ukraine. He emphasised that Russian aggression towards Ukraine severely undermines the principles of the UN Charter and claimed that the consequences of Russia’s actions will have long term impacts on the promotion and protection of human rights for generations to come.

Mr Villegas then introduced the three members of the recently established Independent International Commission of Inquiry on Ukraine who provided an overview of its purpose. Erik Mose, Chair of the Commission of Inquiry (COI), underlined that the objective of the COI is to identify individuals and entities responsible for violations of IHRL, IHL, or other related crimes.

Mr Villegas provided an opportunity for the countries concerned to speak and noted the absence of the Russian delegation. The representative of Ukraine highlighted that the aggression witnessed within her country over the last ten weeks, has led to the destruction of everything they have been trying to build since the establishment of independence over three decades ago. Member states of the Human Rights Council were then permitted to speak. Estonia, on behalf of the Nordic Baltic countries, welcomed the convening of the special session and discussed the global consequences of Russia’s actions in terms of food shortages and global security. France, on behalf of the EU, noted that the large number of civilians forced to flee their homes highlights the scale of the war, while the United States claimed that the Russian government’s frustration at its military failures in Ukraine have led to even more egregious abuses in the region as seen in the ruthless destruction of Mariupol and reports of executions and gender-based violence.

The session was concluded with a vote on Draft Resolution A/HRC/S34/L1 on the deteriorating human rights situation in Ukraine stemming from Russian aggression which was presented by the Permanent Representative of Ukraine. After states provided general comments on the Draft Resolution, it was passed with 33 yes votes, 12 abstentions, and 2 no votes.

Geneva International Centre for Justice (GICJ) continues to condemn the Russian invasion of Ukraine and its egregious violations of IHRL and IHL. The indiscriminate and disproportionate attacks carried out by Russian armed forces and affiliated armed groups represent a direct threat to the right to life of citizens in Ukraine and greatly undermine the object and purpose of the UN Charter. GICJ welcomes the creation of the COI and appeals for it to be sufficiently funded to ensure it can fully utilise its investigative powers and provide effective accountability for crimes committed during the conflict. Moreover, GICJ supports the passing of Draft Resolution A/HRC/S34/L1 which reaffirms support for the Council to exercise its mandate and address the grave human rights situation in Ukraine. The adoption of this resolution highlights the international community’s desire to hold Russia to account for its actions and sends a strong show of support for the people of Ukraine.