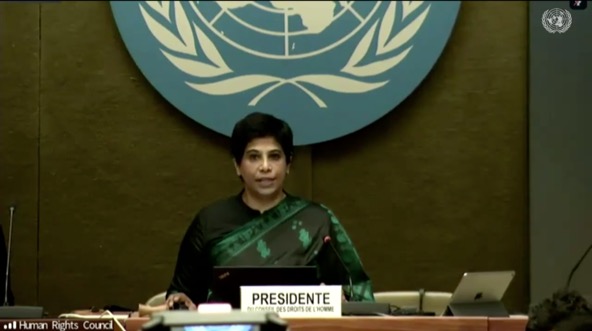 During the 47th Session of the UN Human Rights Council Geneva International Centre for Justice (GICJ) delivered two oral statements in collaboration with Association Ma’onah for Human Rights and Immigration and International Organization for the Elimination of All Forms of Racial Discrimination (EAFORD). GICJ also submitted two written statements in collaboration with a number of NGOs.

We want to thank Austria for its participation in the Universal Periodic Review and for its commitment to addressing human rights concerns. In this regard, we note significant advances, including the implementation of measures to prevent social and economic impact of the COVID-19 pandemic, with new acts and programmes for the strengthening of equality and the progressive elimination of all forms of discrimination.

However, Ma’onah Association for Human Rights and Immigration and Geneva International Centre for Justice remain concerned about the alarming escalation of racial violence against minorities and migrants in Austria. We note a high level of anti-Muslim hatred which is reflected in the increasingly xenophobic public discourse. In recent months, numerous allegations of ethnic profiling by police against persons from minority communities were reported. Moreover, we regret that the country has introduced significant restrictions concerning family reunification and naturalization. We urge the Austrian government to take measures that would facilitate the integration of newcomers into the country and to ratify the International Convention on the Protection of the Rights of All Migrant Workers and Members of their Families.

Furthermore, since the beginning of the pandemic, online abuse has increased. However, we welcome the Parliament’s approval of a bill to fight against online hate speech, and we encourage the Austrian authorities to ensure that this new regulation does not turn into excessive content blocking. Following the November 2020 attack, Austria has pledged to fight against terrorism and separatism by implementing assessment tools adapted to the identification of risks of violent radicalization. We support these efforts and encourage Austria to eliminate the risks of fragmentation and to further protect fundamental rights.

Statement by: International Organization for the Elimination of All Forms of Racial Discrimination (EAFORD)

We thank the Independent Expert for his update on technical assistance and capacity-building in the field of human rights in Central African Republic.

We remain deeply concerned with the humanitarian situation in Central African Republic and its further deterioration because of the armed conflict.

We would like to raise the urgent threats from explosive ordinances that have been recently increasing due to intensified conflict particularly in the West of Central African Republic. Amidst the dire humanitarian situation in the country, more people face new threats, which further exacerbates the plight of humanitarian workers who already face the challenge of accessibility in bringing aid to those desperately in need.

The number and situation of internally displaced persons (IDPs) is also of great concern especially towards the stabilisation of communities and society at large in the country.

We at International Organization for All Forms of Racial Discrimination and Geneva International Centre for Justice urgently recommend capacity-building towards strengthening an integrated psychosocial support system, particularly for children but also for IDPs and women who have suffered forms of sexual violence.

We also recommend technical assistance and capacity-building towards enhancing judicial systems as well as human rights training and education for enforcers of law under the government.