“There is future if there is truth”

On July 14th 2022, members of the Colombian Truth Commission presented the Final Report in Geneva, Switzerland. Following the presentation of the report, they met with the United Nations High Commissioner to discuss the commission's work and progress. For his part, one of the members of the Commission, Mr Palacios explained the importance of continuing with the social dialogue to achieve the non-repetition of the Colombian armed conflict and move towards reconciliation.

Then, on the 15th of June, the Commission met with the Human Rights Council (HRC) to present the final report. During the meeting, they thanked the international community for its support. They emphasised the need to move forward in implementing the Peace Agreement and follow up on the recommendations presented by the Truth Commission. Subsequently, Commissioners Carlos Martín Beristain and Alejandro Valencia met with UNHCR Deputy High Commissioner Raouf Mazou to present the findings, recommendations and the exile volume 'La Colombia Fuera de Colombia'.

The Colombian Truth Commission introduced its final report on the 28th of June, 2022. The long-awaited report on nearly six decades of widespread civil conflict was presented during an emotionally charged ceremony in Bogotá, the country's capital. The Truth Commission's final report marks the culmination of hours of interviews with victims, armed actors and public servants involved in the armed conflict between the Colombian State and the Revolutionary Armed Forces of Colombia (FARC) [1].

Since the formation of the FARC in 1964, there have been numerous attempts at creating a negotiated peace. Nevertheless, they failed. But, in 2012, Colombia's President Juan Manuel Santos decided to start negotiations with the base of the General Agreement for the Termination of the Conflict and the Construction of a Stable and Lasting Peace. The agreement had six parts: integral rural development, political participation, end of the conflict (including a bilateral and definite ceasefire and cessation of hostilities, and surrender of weapons), create a solution to the problem of illicit drugs and victims, and ratification, implementation and verification. As opposed to past peace processes, the current process has a defined agenda with limited topics for discussion. It was also the first time that the ''end of the conflict'' and the surrender of weapons by the FARC were explicitly listed as a goal of the peace process. After establishing the basis of the negotiation, the peace discussion began in La Habana, Cuba. After years of negotiation, in 2016, the Colombian government and the FARC signed a peace agreement. This agreement was submitted as a plebiscite to the Colombian people, who voted against it. But, the agreement was renegotiated and signed by President Santos and implemented through a law passed by Congress.

The peace agreement established the Integral System of Truth, Justice, Reparation and Non-Repetition, which includes the Truth Commission. It was created to uncover the truth about what happened in the context of the armed conflict. The Commission contributes to the clarification of the violations and infractions committed during the conflict and offers a comprehensive explanation [3]. On June 28, the Final Report of the Truth Commission was released. It consists of five chapters. First, “Colombia outside Colombia”: the truths of exile. Second,  “Not a lesser evil”, Children and Adolescents in Armed Conflict. Third, “Call for proposals for Big peace”, Statement of the Commission for the Clarification of Truth, Coexistence and Non-Repetition for the Clarification of Truth, Coexistence and Non-Repetition. Fourth, “Findings and Recommendations of the Colombian Truth Commission”. And fifth, “When the Birds Didn't Sing”: stories of the armed conflict in Colombia. Testimonial Volume [4].

In this order of ideas, the report contains ten thematic issues. First, the historical narrative which discusses the significant milestones and explanations behind the Colombian conflict and the factors that persist today. Second, concerns about violations of Human Rights and International Humanitarian Law, including their intentionality, mode of operation, and impacts over time and in different locations. Third, the topic of violence against women and their role in peacebuilding and violence against LGBTQ+ people. Fourth, the assessment of the armed conflict's causes, dynamics and effects on ethnic minorities. Additionally, it will examine how strategic considerations and natural wealth have led to disputes over these communities' territories. Fifth, includes the experiences of children and adolescents who lived through the conflict as minors and gave testimony about their experiences. This analysis will focus on the lack of protection for Colombian children and the impact of orphanhood and recruitment. Sixth, is the evaluation of the impacts, coping, and resistance caused by the war on millions of victims and the individual and collective consequences they endured as a result. Seventh, focuses on how communities have overcome the violence they suffered in the context of the armed conflict despite social fractures [5].

Eighth is a testimonial section that will collect stories about violence along with its impact on victims and perpetrators who have lived through the conflict. Based on a selection of testimonies, these stories will be divided into three main parts: before the violence, during the war, and the prospects for the future. Furthermore, this section contains a sound volume that will present a series of audio pieces to generate a sensory connection with the public, making it the first of its kind. Ninth, the explanations of how the armed conflict differs across Colombian regions. Such a  narrative would illustrate the evolution of the war, victims' experiences, and social movements. Furthermore, the course will examine the differences and similarities in the dynamics and impacts of armed conflict in different regions. Finally, the topic on Synthesis is the tenth theme. It would include findings, conclusions, and recommendations for “non-repetition”, to avoid the recurrence of future violence. This will help one understand the impact of the war, its evolution over time, and what the Commission considers key conclusions that will help readers understand the conflict more deeply.

Why is the report so important?

Colombia is a country that has lived in a state of armed conflict for the last 60 years. During these decades, acts of violence, states of siege, torture, kidnappings and massacres have accumulated, flooding the countryside and the collective conscience with blood. The large number of victims has bred doubts around the truth of many events that transpired.

A history of killings in Colombia has inflicted generational trauma that has caused a legacy of pain and resistance. The elimination of the other's life took the space of politics and peasant life. Such trauma becomes ingrained in the identity of Colombia, a country that has tried numerous times to build peace but continues to be entangled in new cycles of violence [2]. The number of victims is not precise, but they are increasing.

The Truth Commission also specifies between different crimes committed during the armed conflict. The report covers data between 1985 and 2018. Over the years, the conflict peaked between 1995 and 2004; civilians made up 45% of the victims, not combatants.

The number of victims of enforced disappearances is estimated at 121,768. This practice became associated with the Colombian State during the '70s and '80s which marked the implementation of the "Security Statute '' made by the government of Julio César Turbay Ayala (1978-1982). With the implementation of the statute, enforced disappearances became a counterinsurgency tactic by the government. Again, during the '90s and 2000s, the paramilitary groups used the practice massively. From 1995, there was a growth that peaked in 2002. 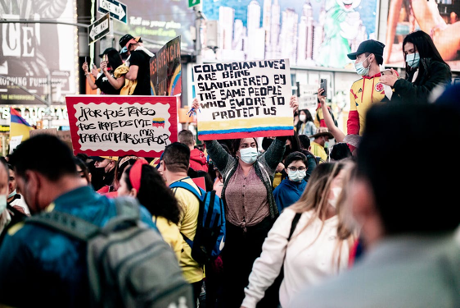 The Truth Commission identified three types of violations. Firstly, arbitrary detentions were used during the conflict to destructure social organisations or inflict fear on their members. They are not backed by evidence, but they were ways of criminalising civil society under the stigma of the internal enemy. Secondly, the report talks about kidnapping and extorsions. This crime resulted in 50.770 victims. The Commission explained that the primary responsibility lay with the FARC. During this practice, people are treated like merchant goods, for which their lives are valued; if the goal is not achieved, they will be killed. Thirdly, torture. According to the report, they were carried out in four situations: arbitrary detentions committed by the armed forces and the State during an emergency; massacres and attacks on civilians; extrajudicial executions and kidnappings committed by the FARC where the kidnapped were subjected to humiliations, isolation and chaining.

According to the records, there were 16.238 children recruited. The recruitment was performed mainly by Illegal armed groups. Nevertheless, the State also recruited minors, when the law allowed it, before 1996.

The Commission identified this crime with the most victims. Over 8 million people were displaced due to the armed conflict. Fleeing became a demeaning way of saving one's life by losing things and values. At times, being forcibly immobilised also represented coercion of freedom, one of the key fundamental rights. Limiting the movement of the civilian population during confrontations or other conflict events was also a widespread practice. The displacements generated a human rights crisis within the country.

Geneva International Centre for Justice (GICJ) celebrates the Last Report from the Truth Commission as a significant step towards peace in Colombia. We also encourage the Colombian government to implement the suggestions made by the Truth Commission. Although these are non-binding, they provide guidance towards truth, justice, reparation and non-repetition. GICJ also calls upon the newly elected government to push the Peace Agreement into one of the main agenda points.